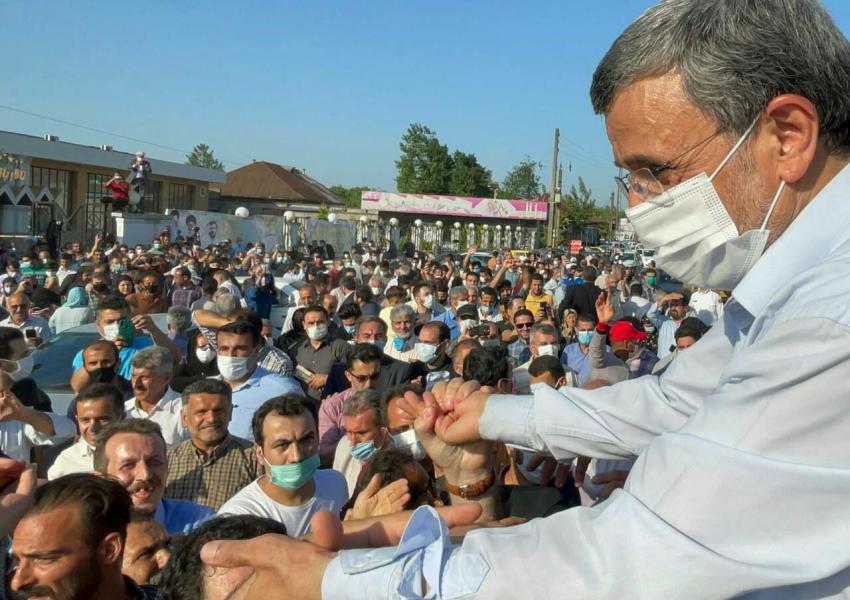 Brigadier-General Qasem Rezaei, vice-Chief of Iran’s Law Enforcement Force has warned of attempts to undermine participation in the June 18 presidential election, and stressed that the police are ready to quell any "sedition" originated at home or abroad.

Rezaei drew attention to some would-be candidates making claims illustrating "nothing but treason" and showing they were "servants and mercenaries" of foreign powers. The high-ranking police official's veiled references are likely to refer to former president Mahmoud Ahmadinejad and the reformist former minister Mostafa Tajzadeh.

Ahmadinejad has now at least three times in speeches and social-media messages threatened to call a boycott if he is not cleared to stand in the election by the watchdog Guardian Council. Analysts generally expect the council not to include either Ahmadinejad or Tajzadeh in the list of approved candidates due to be announced on May 27.

Like Ahmadinejad, Tajzadeh who has repeatedly criticized both the Guardian Council and the Guardianship of Jurisconsult (velayat-e faqih), the constitutional priniciple asserting the primacy of the Supreme Leader. Tajzadeh was imprisoned for seven years after the 2009 unrest following Ahmadinejad’s disputed re-election.

Tweet showing crowds chanting "Ahmadi[-nejad] is my life and soul, He is my President" and calling on him "to rescue the nation" , in a town on Wednesday.

"With people's support and their demand, the Law Enforcement Force will not compromise with these people even a bit,” Rezaei told reporters on the sidelines of a police force exhibition in Tehran on Thursday. “Our strategy is being prepared ahead of time…Any threat from overseas or in this same country will be dealt with… Seditionists, in whatever guise they seek to disturb people's peace, we will kill it in the seed.”

Some hardliners openly attack Ahmadinejad as an "infiltrator" and a "seditionist" on social media, and in media articles make it clear they are referring to him in warning of a "new sedition". On Wednesday, the news website 598.ir, under a headline "Is Another Election Sedition Approaching?" proclaimed that "legitimate-looking infiltrators with popular images have become active in the media.”

Chief of the interior ministry's elections taskforce, Jamal Orf, announced April 10 that more than 59.3 million Iranians were eligible to vote on June 18. According to a telephone poll taken earlier this month by Stasis for Iran International TV, 55 percent of those polled have decided not to vote with 18 percent undecided. The news agency ISNA's polling organization ISPA May 15 announced findings that 45 percent of those eligible intended to vote.

The Stasis poll gave Ahmadinejad 29.4 percent support among those saying they intended to vote. In the past few days Ahmadinejad's supporters have trumpeted social-media videos of crowds of supporters chanting passionately at meetings with the former president in various places including Astaneh Ashrafieh, a town of nearly 50,000 in the north of the country Wednesday, and Khonj, a town of nearly 20,000 in the southern Fars province. Ahmadinejad president is travelling to the northwestern province of West Azarbaijan on Friday.

In recent speeches Ahmadinejad has said that he will not encourage his supporters to protest or use violence if he is not cleared to stand by the Guardian Council. But his rhetoric may sound like a threat, rather than reassurance, to the authorities.

City officials in Iran's capital Tehran are planning to put locks on large waste containers in the streets to prevent garbage pickers from accessing waste. END_OF_DOCUMENT_TOKEN_TO_BE_REPLACED

The Biden Administration has confirmed to the US Congress that sanction imposed by its predecessor on Iran have drastically reduced Iran's trade with the world. END_OF_DOCUMENT_TOKEN_TO_BE_REPLACED

The UK government said on Sept 20 that Britain would "not rest" until all its dual nationals being held in Iran were returned home. END_OF_DOCUMENT_TOKEN_TO_BE_REPLACED