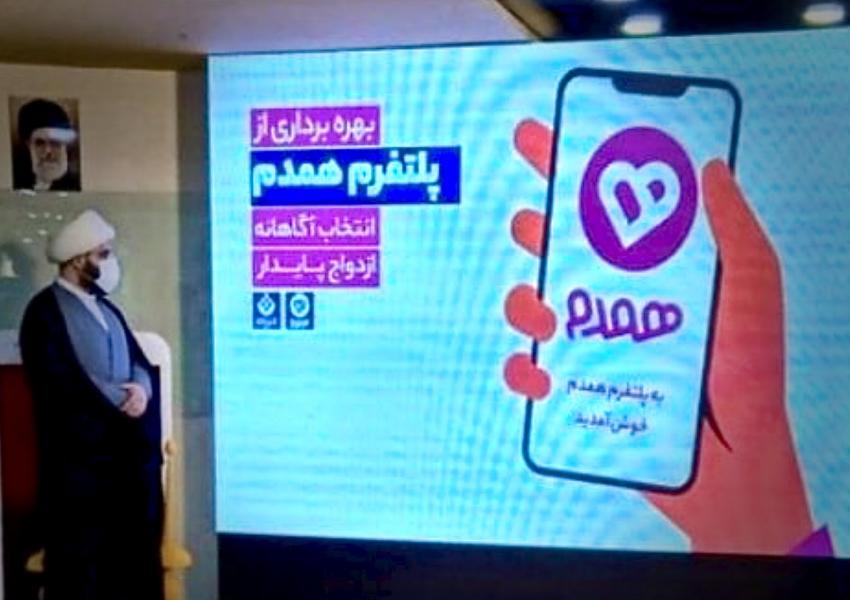 The application, Hamdam (‘companion’) was developed by Tebyan Cultural Institute, which is affiliated to the Islamic Propaganda Organization and headed by Komeil Khojasteh, a nephew of Mansoureh Khojasteh, wife of Supreme Leader Ali Khamenei.

Iran in recent years has promoted marriage and having children as a response to an ageing population. Some religious figures have joined the campaign. Ayatollah Jafar Sobhani in 2014 warned that the Saudis – where the ruling Saud family is Sunni – were plotting to obliterate the "absolute majority of Shiites in all Iranian cities."

Iran's population has doubled from around 40 million in the early 1980s to 84 million, but a declining birth rate means the median age at 32 is about the same as Saudi Arabia at 31.8, but higher than Iraq at 21 and Palestine at 20.8. Khamenei has repeatedly stressed that Iran’s population needs to rise to 150 million to avoid becoming a land of old people. The population is projected to peak at 105 million in 2026.

Kayhan newspaper, a principlist flagship, Tuesday suggested a variety of incentives to encourage marriage. A commentary headlined "A Crisis Called Negative Population Growth Rate," written by cleric-journalist Abolhasan Mousavi-Tabatabaei, urged the government to support match-making institutions, and to offer young newlyweds cheap housing for a few years, bank accounts for children, monthly benefits for women with more than two children, priority for larger families in government-funded housing, as well as free insurance and healthcare services. Mousavi-Tabatabaei also suggested exempting those from large families from military service, and linking pay for government employees to the numbers of their children.

Critics of a population increase policy say that the Islamic Republic has not been able to boost the living standards of its current population sufficiently, with more than half now considered to be poor. The average annual economic growth rate since the Islamic revolution has been 2.5 percent, which is insufficient for a developing country.

"Kayhan is suggesting such generosity but only two days ago the same newspaper had objected to an increase in pensions," conservative Tabnak website said.

The Kayhan commentary actually did acknowledge a weak economy to be the root cause of a slowdown in population growth. The author highlighted two issues − firstly, young people and those nearing middle age not marrying due to financial problems or not finding the right person; secondly, small families with only one child – leading to a population growth rate under 1 percent. He also criticized celebrities who married and divorced repeatedly, and who called their pets their daughters or sons, thereby spreading the "imported unsound culture" of western countries and normalizing single life.

But the solutions Khamenei supporters are advocating is more state expenditure to promote marriage and childbearing rather than growth in jobs and incomes. That would necessitate an opening of the economy, reducing state control, more foreign and domestic investments and less nepotism and corruption that have been financed by oil exports.

Iran's president Ebrahim Raisi addressed the UN General Assembly saying his country wants a resumption of nuclear talks with world powers to lead to the removal of US sanctions. END_OF_DOCUMENT_TOKEN_TO_BE_REPLACED

President Joe Biden told the UN General Assembly on September 21 that he will prevent Iran from getting nuclear weapons. END_OF_DOCUMENT_TOKEN_TO_BE_REPLACED

India has seized nearly three tons or $2.72 billion worth of Afghan heorin shipped from Iran. END_OF_DOCUMENT_TOKEN_TO_BE_REPLACED

Iran's foreign ministry spokesman has said that nuclear talks with world powers will start in a few weeks but has not given a firm date. END_OF_DOCUMENT_TOKEN_TO_BE_REPLACED