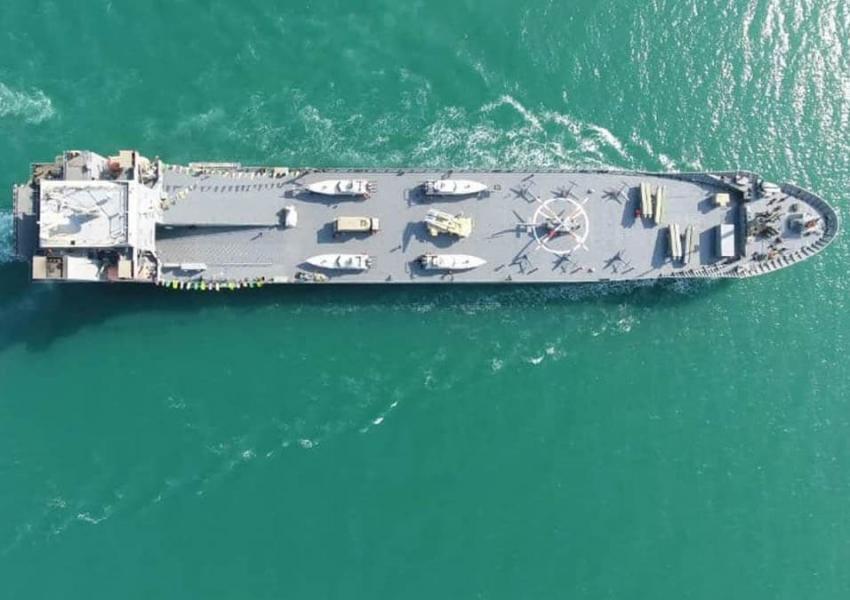 The ship was added to IRGC Navy in a ceremony on Thursday in the presence of Hossein Salami, the commander in chief of the IRGC, and it was announced that by adding this vessel, “the Revolutionary Guard’s campaign for a strong presence in distant waters begins today”.

According to the IRGC’s statement, Roudaki base would “ensure sustainable security in maritime routes and rescuing trade vessels and fishing boats of Iran and regional countries.”

But the Hisutton military analysis website said on Saturday that the IRGC propaganda is a hyperbolic military claim and the vessel is in fact a merchant ship repurposed as a forward operating base.

The website warns however, that “behind all the noise, there are potentially serious implications. the IRGC is evolving its capabilities, particularly in power projection.”

The Hisutton states that while Shahid Roudaki was paraded for the media, an assorted array of weapons systems aboard that looked impressive, “were on trailers, just parked for display.”

For example, the website points out that although the Qader anti-ship missile launchers were bolted to the deck, their radar was parked on the deck which offers a relatively short radar horizon and also a limited arc of coverage. Normally, the radars must be attached to the superstructure.

The military website described the new sea base warship as “a floating arms bazaar”.

The website raises the question “how viable the Shahid Roudaki actually would be for any kind of long-endurance, high-seas operation?”

And it goes on to mention several obvious irregularities based on the weapons and equipment displayed on the ship: “A cursory examination of the vessel doesn’t seem to reveal drone-launch equipment, missile reloads, helicopter maintenance/refueling facilities or hangarage, or even an obvious means of rapidly deploying and recovering the four speedboats.

The Drive also points out that it is not the first time that the IRGC has made questionable boasts about its naval capabilities, referring to the example of Sahand “stealth destroyer,” a missile corvette type vessel that has no stealthy features, and the Kharg, a fleet tanker with a helipad that has been repeatedly and credulously described as a “helicopter carrier.”

The IRGC also has also once built a model of an American aircraft career, which was ridiculed by the US Navy. In another instance, the IRGC claimed that they have invented a “corona-detector” device, which could identify coronavirus in less than five seconds by utilizing “bipolar viruses”. The Iranian Physics Association responded to the claim by calling it “unbelievable,” and “science-fiction novel material”.

City officials in Iran's capital Tehran are planning to put locks on large waste containers in the streets to prevent garbage pickers from accessing waste. END_OF_DOCUMENT_TOKEN_TO_BE_REPLACED

The Biden Administration has confirmed to the US Congress that sanction imposed by its predecessor on Iran have drastically reduced Iran's trade with the world. END_OF_DOCUMENT_TOKEN_TO_BE_REPLACED

The UK government said on Sept 20 that Britain would "not rest" until all its dual nationals being held in Iran were returned home. END_OF_DOCUMENT_TOKEN_TO_BE_REPLACED