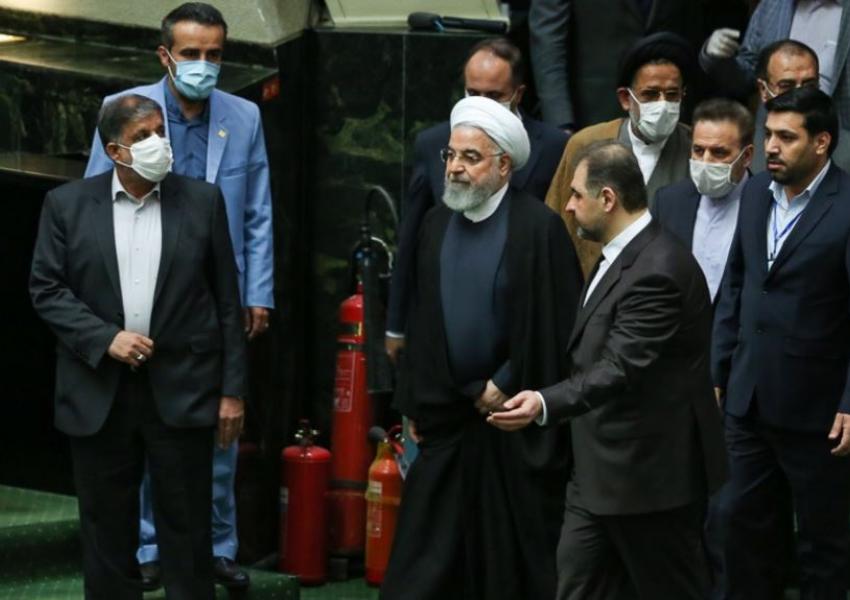 Critics of President Hassan Rouhani in the Iranian parliament (Majles) have once again demanded the president be impeached - despite clear advice in July from Supreme Leader Ali Khamenei to avoid “a confrontational atmosphere” and give up talk of impeachment during Rouhani’s last months in office.

Rouhani’s opponents at the Majles and in the press accused him of distorting the history of Islam with his talk of Imam Hassan, the second of Shiite Imams, who made peace with his enemies. Zolnouri and other hardliners at the Majles published a list of 46 parliamentarians calling for Rouhani’s ouster.

A Telegram channel that reports news of the Majles confirmed October 18 that 46 lawmakers had signed a motion impeaching the president for “incompetence” on 20 grounds including “causing heavy financial losses to the country and wasting a large amount of the nation’s resources.”

On Monday [October 19] there were calls to hold protests in Qom, the city Zolnouri represents in parliament, and Mashhad, where protests against Rouhani’s economic policies started in December 2017 before spreading nationwide. Zolnouri was among the designated speakers in Qom, although it apparently it did not take place. 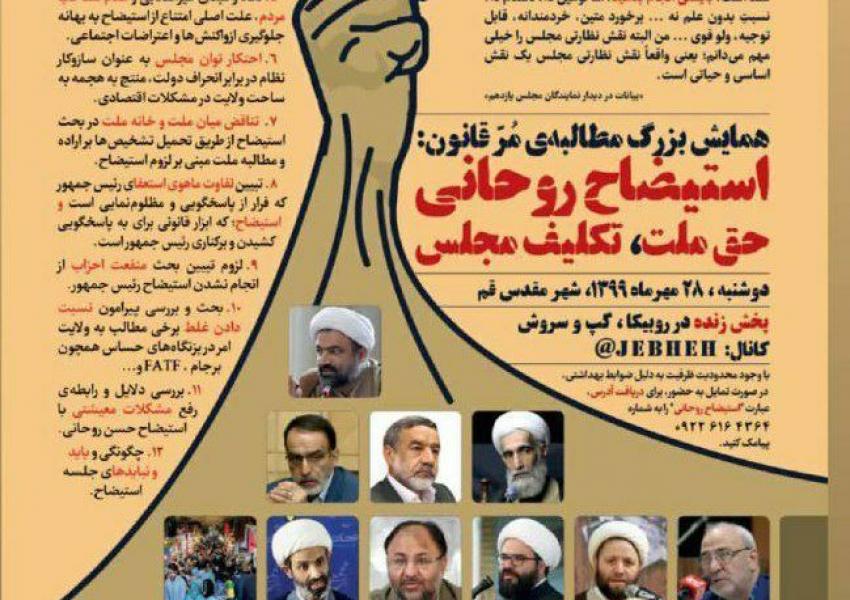 Former reformist lawmaker Mahmoud Sadeghi warned in a tweet that those trying to take advantage of public dissent by calling for Rouhani’s impeachment should realize that most protesters saw no difference between Rouhani and Khamenei, and that any “swear word” uttered against Rouhani would soon be generalized.

Rouhani has been under pressure during the past eight months over management of Covid-19 pandemic, and his optimistic statements about the state of the economy have also undermined his popularity.

But the renewed calls within the political class for Rouhani’s impeachment, trial, and even execution are better explained by the presidential election looming in June 2021 and by the succession to Khamenei as supreme leader.

One part of story involves a player largely absent from the scene, former Majles Speaker Ali Larijani, whom the hardliners see as an ally and accomplice of Rouhani. They have said time and again that without Larijani’s help Rouhani would have not been able to conclude the 2015 nuclear deal with world powers including the United States.

The hardliners have also said that Rouhani and allies are mulling the idea of Larijani as the next president. They suspect Rouhani eyes the position of Supreme Leader after Khamenei’s death, with Larijani as his president. Within the ‘principlist’ camp, the Paydari Front, including supporters of former President Mahmoud Ahmadinejad, is particularly committed tp ending the careers of both Rouhani and Larijani.

The danger for Khamenei in their onslaught is simply explained in Sadeghi’s tweet with his reference to the 2017-2018 protests, where people chanted slogans against Rouhani, Khamenei and all the leading political factions.

On the other side of the political spectrum to Sadeghi, Tehran’s Friday Prayer leader Ahmad Khatami has put the same argument, breaking a silence of nine months during the pandemic to warn that gatherings in Qom and Mashhad are not spontaneous.

Khatami’s startling implication is that the chief of the Parliament’s National Security Committee may be conspiring against the country’s security. Such rising tempers and heated accusations – amounting to the “confrontational atmosphere” Khamenei detected in July – may not cool down unless the Leader intervenes soon.

City officials in Iran's capital Tehran are planning to put locks on large waste containers in the streets to prevent garbage pickers from accessing waste. END_OF_DOCUMENT_TOKEN_TO_BE_REPLACED

The Biden Administration has confirmed to the US Congress that sanction imposed by its predecessor on Iran have drastically reduced Iran's trade with the world. END_OF_DOCUMENT_TOKEN_TO_BE_REPLACED

The UK government said on Sept 20 that Britain would "not rest" until all its dual nationals being held in Iran were returned home. END_OF_DOCUMENT_TOKEN_TO_BE_REPLACED