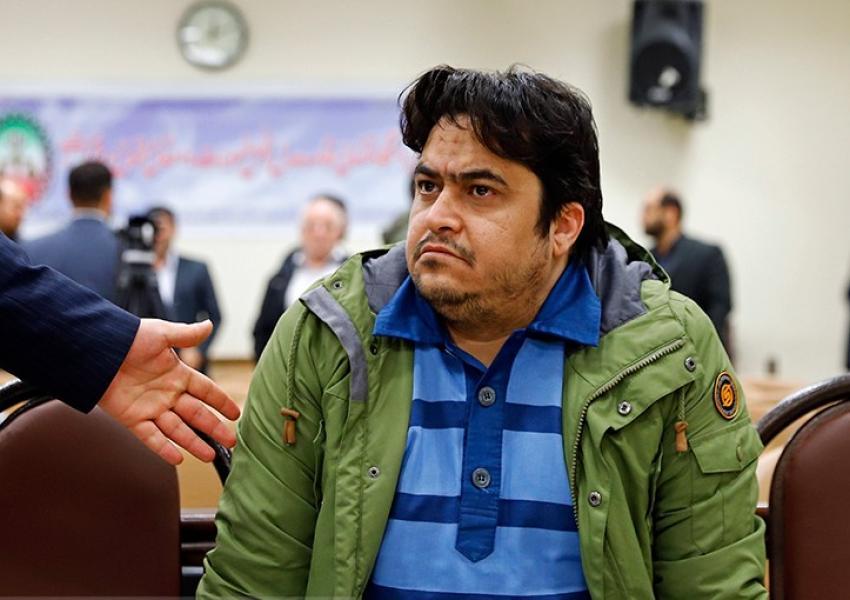 The first trial session of Ruhollah Zam the founder and admin of the popular dissident Telegram channel “Amad News” was held on Monday morning behind closed doors. He has been charged with 17 crimes.

The trial is presided by Judge Abolqasem Salavati who is known as a favorite of the Islamic Revolutionary Guard Corps (IRGC) and the Intelligence Ministry. In December, Judge Salavati along with Judge Mohammad Moghiseh were sanctioned by the United States for violations of human rights and unfair trials.”

“Spying for the intelligence agencies” of France and Israel, “collaboration with the hostile United States government,” and “participation in gathering classified data with the intention of providing them to others,” are three of his charges which relate to his activities abroad.

According to the Revolutionary Court, Zam’s charges relating to national security are as follows: “Assembly and conspiracy to commit crimes against national security, participation in deceiving and provoking people to war and massacre, effectively persuading loyal armed forces to mutiny, desert, surrender, or refuse to perform military duty.”

He has also been charged with “propaganda against the Islamic Republic in favor of dissident groups and organizations, creating and running the dissident Amad News and Sedaye Mardom (Voice of the People) Telegram channels to undermine national security, membership and managing the dissident Saham News website, spreading lies, blasphemy against Islam, insulting Imam Khomeini and the supreme leader, insulting the officials, and spreading corruption on earth.”

Ruhollah Zam left the country in 2009 after he was arrested during the protests. He was living in France with his wife and two children.

He was arrested by Iraqi security forces during a trip to Iraq and was extradited to IRGC.

City officials in Iran's capital Tehran are planning to put locks on large waste containers in the streets to prevent garbage pickers from accessing waste. END_OF_DOCUMENT_TOKEN_TO_BE_REPLACED

The Biden Administration has confirmed to the US Congress that sanction imposed by its predecessor on Iran have drastically reduced Iran's trade with the world. END_OF_DOCUMENT_TOKEN_TO_BE_REPLACED

The UK government said on Sept 20 that Britain would "not rest" until all its dual nationals being held in Iran were returned home. END_OF_DOCUMENT_TOKEN_TO_BE_REPLACED