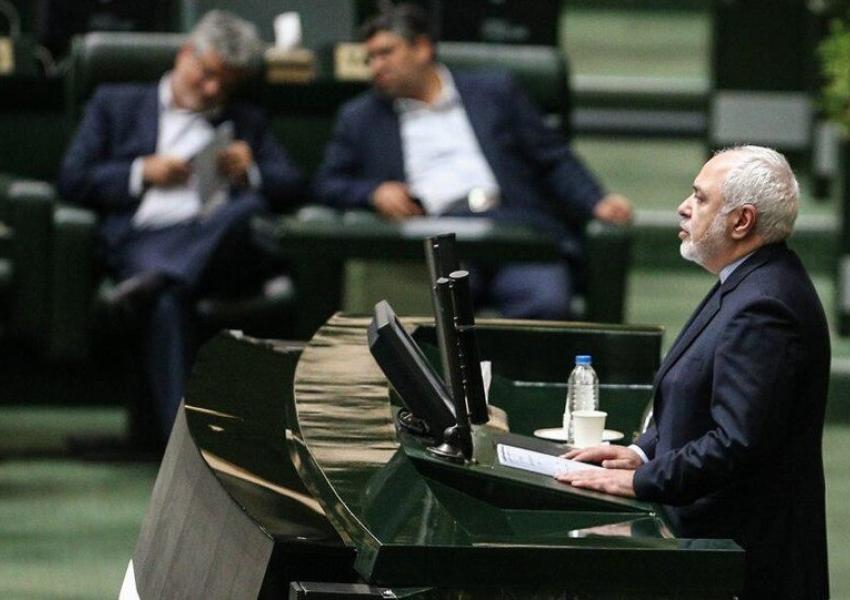 The not-so-respectful reception of Javad Zarif by the fundamentalist MPs in a controversial session on Sunday, July 8, 2020, once again showed the extent to which the foreign minister, despite his eloquence, lacks historical memory and is alien to strategic planning and adopting effective tactics in dealing with the challenges of the day.

To prove his innocence and difference from the rest of the Government, during Sunday's parliamentary session Zarif resorted to a mixture of tactics: contradiction; partisan aggression and immediate retreat; and cashing on his contact with Ali Khamenei, Qassem Soleimani, and Hassan Nasrollah, the leader of Lebanon's Hezbollah.

At the end of Sunday's session, not only did he fail to win the support of the newly formed fundamentalist parliament and was forced to bear insults such as "despicable" and "liar" hurled at him, but he was also criticized by Hossein Shariatmadari, the editor of the Kayhan newspaper, in exchange for attaching himself and the Foreign Ministry to Ali Khamenei, instead of the country's President.

In a part of his remarks on Sunday, Rouhani’s Foreign Minister bragged to the newly elected MPs and tried to appear as a literate and knowledgeable politician who can see the bigger picture. He boasted about his knowledge of the strategic change in the world during the emergence of a new order after the collapse of the Soviet Union and the rise of regional powers in the sphere of influence of the two great powers after WWII.

But instead of trying to justify the reasons and necessity for Iran's active presence in the region through the development of local cooperation, Zarif warned that some power-hungry countries, such as Iraq, disappeared during the transition from a bipolar system. Then, in a nervous reaction to the protesting MPs, he accused them of ignorance. This was a wrong tactic at the wrong moment, which forced him to back down and thank the same MPs who had called him a "despicable coward" immediately.

Zarif had forgotten that Sunday's meeting had nothing to do with his performance in the Foreign Ministry and had been assembled to challenge the government's performance as part of a new conservative line-up on the division of power and the setting of the next government.

Zarif's assertion that "if I lied, the Supreme Leader heard, and if you call me a coward, the Supreme Leader called me brave" was an attempt to justify his actions, but with this inappropriate argument, he pitted the MPs against Ali Khamenei. This was not welcomed by the MPs, which is evident from the rebukes he received from Shariatmadari, Khamenei's representative in Keyhan Newspaper.

Zarif had forgotten that at the beginning of Mahmoud Ahmadinejad's second term, Ali Khamenei ostensibly supported him to get the better of his rival, Hashemi Rafsanjani and went so far as to prefer Ahmadinejad to his 50-year-old comrade, but less than two years, the same President was forced into temporary walkout from the presidential palace. In politics, values, alliances, and loyalty are not permanent.

Zarif used the trick of belittling the United States to show his courage, instill a sense of pride in parliament, and show solidarity with parliamentarians. But many in parliament remembered his remarks seven years ago at the University of Tehran where he said to a large crowd of students "Is America, who can destroy our entire defense system with one bomb, afraid of the few missiles we have?”

Zarif's misunderstanding of the real reason for his calling to parliament, which forced him to adopt a half-hearted aggressive policy against the protesting MPs, rendered a desperate image of him by the end of the session.

Excited and nervous, Zarif defended the nuclear deal, which he described as "historic and a source of pride," and went so far as to call it "imposed on the United States." Undoubtedly, Donald Trump, who has repeatedly called the nuclear deal "the worst deal in history," will make the most of this political "blunder" of the Islamic Republic's top diplomat during the US presidential election to further crush the deal.

Zarif claimed in parliament that he used to meet with Qassem Soleimani every week in the process of carrying out his responsibilities and that Soleimani was informed about his actions. But, less than two years ago, during Bashar al-Assad's visit to Tehran at Soleimani's invitation, Zarif was left out of the meeting and resigned, only to return to work when he was warned that "people do not resign in the Islamic Republic; people get fired."

The foreign minister was trying to sell himself as an "insider" in the parliament to the protesting MPs, but a few days earlier, at a Security Council meeting on Wednesday night, he began and ended his speech quoting Mohammad Mossadegh, the Shah's prime minister. Of course, one should not expect this appeal to Mossadegh to be to the liking of extremists such as Zulnoor and Qoddusi and even Baqer Qalibaf.

While the Islamic Republic needs the support of the international community during future Security Council discussions, Zarif did not spare the UN Secretary-General and the three European countries in his aggressive approach at the Security Council cyber meeting.

Unsuccessful in attacking the fundamentalists in parliament, Zarif eventually resorted to indirect threats to the regime and warned the MPs that "we are all in the same boat". He was alluding to the internal opponents of the Islamic Republic and their famous slogan "Reformist! Fundamentalist! Your days are over!". In other words, in the eyes of the United States, there is no difference between a reformist and a fundamentalist.

Zarif's presence in the parliament took place in a chaotic atmosphere that has been going on in the country for weeks, whose effects were quite evident in the harsh behavior of both Zarif and the MPs.

There are many indications of the difficult situation in which the government is stuck: rising corona cases in many provinces; strange explosions at critical missile and nuclear facilities, from Khojir to Natanz; the spread of explosions to medical and industrial centers; the loss of Rial’s value in the face of the rising dollar prices which harmed the domestic economy; and the Security Council meeting a week after the IAEA Board of Governors meeting, in which major European countries presented a resolution condemning Iran with the support of the United States.

Amidst all this chaos, perhaps the only bright point for the government is that unemployment, disease, and growing hardships have left the people too exhausted to explode and cause an immediate danger to the regime.

Zarif, who was once hoping to mark himself in history, will now either have to comply with the demands of hardline fundamentalists and step by step distance himself from the nuclear deal, of which he was proud, suspend the implementation of the Additional Protocol and arrange the withdrawal from the Nuclear Deal or, as a vanguard of Rouhani's government, he would have to be interrogated and sacrificed in the slaughterhouse of the new parliament. Zarif failed to understand that he was only a pawn in the parliamentary power game.

City officials in Iran's capital Tehran are planning to put locks on large waste containers in the streets to prevent garbage pickers from accessing waste. END_OF_DOCUMENT_TOKEN_TO_BE_REPLACED

The Biden Administration has confirmed to the US Congress that sanction imposed by its predecessor on Iran have drastically reduced Iran's trade with the world. END_OF_DOCUMENT_TOKEN_TO_BE_REPLACED

The UK government said on Sept 20 that Britain would "not rest" until all its dual nationals being held in Iran were returned home. END_OF_DOCUMENT_TOKEN_TO_BE_REPLACED