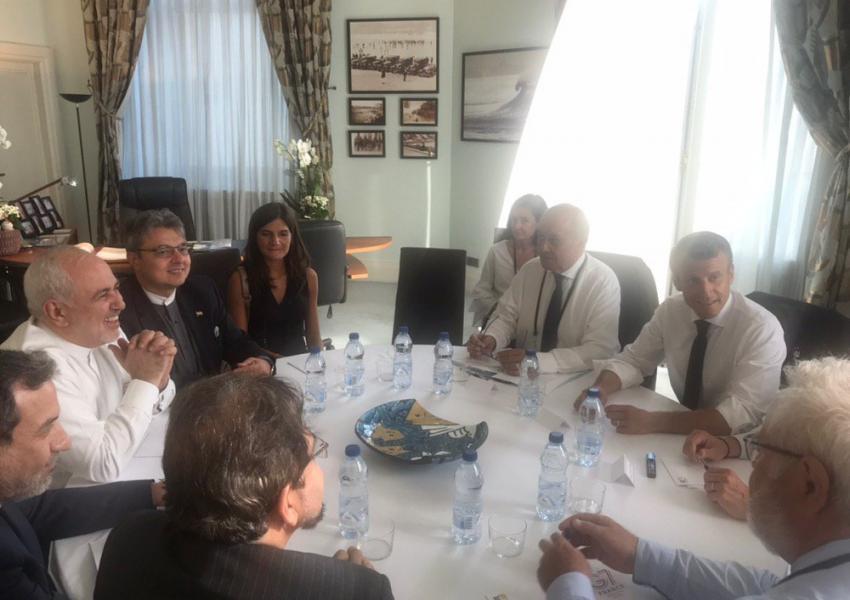 Why Does Zarif Only Wants Cash for Iran’s Oil?

It has been several years since “sanctions” is not a merely threatening word in Iran, but part of people’s daily lives. After the increase in the Iranian regime’s destabilizing behaviors and the US’s withdrawal of the nuclear deal, Iranians have endured more severe and widespread sanctions. These sanctions have caused a hike in prices which extends from the price of cars to bread. Many small businesses have been crushed under the economic pressures and forced to close down.

The Islamic regime in Iran, nevertheless, is seeking ways to gain access to funds by any means so that they do not have to take the bitter pill of negotiating with the Americans. Sending private messages and playing games have not worked out for them this time and the US expanded the sanctions to the supreme leader himself and Iran’s foreign minister.

In the midst of the current hardship for people in Iran and growing discontent, Zarif, the foreign minister, decided to visit a few Scandinavian countries on his own invitation. He ended this trip in Paris, but then suddenly again landed in France where the G7 summit was going on, to meet his French counterpart and Emanuel Macron.

Macron’s talks at Zarif’s presence indicated a thorough discussion between two countries hoping to find a way out of the current dead-end. The beam of hope was soon blocked by Trump.

Iran’s foreign minister told a Swiss newspaper after his meetings that “we want to be able to sell our oil and receive its money”.

Contrary to all Iran’s recent publicity that they had resumed their nuclear program in response to the American violation of the deal, Zarif claimed that Iran had been compliant with the deal. He told international media that IAEA – the UN’s atomic watchdog – has confirmed Iran’s compliance 15 times whose last five times have been after the US’s withdrawal.

However, Iran’s connection to the global economy has deteriorated since then. Zarif referred to the EU’s 11 commitments within the framework of Iran deal and added that “we do not propose any pre-conditions to implement all our commitments. We simply want to be able to sell our oil and receive the money. We have suffered hundreds of billion dollars so far”.

It is crucial to note that despite all the hardship people are going through in Iran, the foreign minister of the regime did not accept to receive basic and rare goods – especially medications - in the country in exchange for Iran’s oil. While many types of life-saving medications are rare in the country, Iran’s foreign minister asks for only cash in exchange for oil.

In fact, one reason behind these sanctions was that the Iranian regime uses oil money to fund terrorist organizations in the regions. Therefore, it seems logical to give Iran necessary commodities instead of oil to limit its support of terrorism on the one hand and help Iranians live by through hardship on the other.

The regime’s behavior in recent years proved that “national interest” in their rhetoric refers to the “regime’s interest”. One of the key elements of securing regime’s interests is funding pro-Iran militias in countries like Lebanon, Syria, and Yemen; the other element is to leverage the same militia groups for the domestic crackdown in case of an uprising. Mehdi Taeb – the head of the Intelligence Organization of the IRGC – said recently that “Syria is Iran’s 35th province and it is a priority to defend it”. Zarif also declines Europe’s promises to fulfill JCPOA’s commitments and insists on cash money since their empty treasury would need cash for their militia proxies.

When the sanctions were mounting on the regime in Tehran, Hezbollah’s leader made a speech and asserted that as long as Iran has money, Hezbollah will be there. This is an excellent insight into why Iran without any cash money would not be able to pursue its ambition inside and outside its borders. So that is why they insist on cash in exchange for their oil.

The existence of the Islamic regime is based on a taboo of having a dialogue with the US. The regime’s representative (Zarif) says that they would be willing to talk with the Americans if they were allowed to sell 700 thousand barrels of oil per day and receive its money. Then they would sit at a table they have avoided for a long time. They need cash money to continue to “export” their revolution and strengthen their domestic power, so they are happy to use this as their pre-condition.

City officials in Iran's capital Tehran are planning to put locks on large waste containers in the streets to prevent garbage pickers from accessing waste. END_OF_DOCUMENT_TOKEN_TO_BE_REPLACED

The Biden Administration has confirmed to the US Congress that sanction imposed by its predecessor on Iran have drastically reduced Iran's trade with the world. END_OF_DOCUMENT_TOKEN_TO_BE_REPLACED

The UK government said on Sept 20 that Britain would "not rest" until all its dual nationals being held in Iran were returned home. END_OF_DOCUMENT_TOKEN_TO_BE_REPLACED