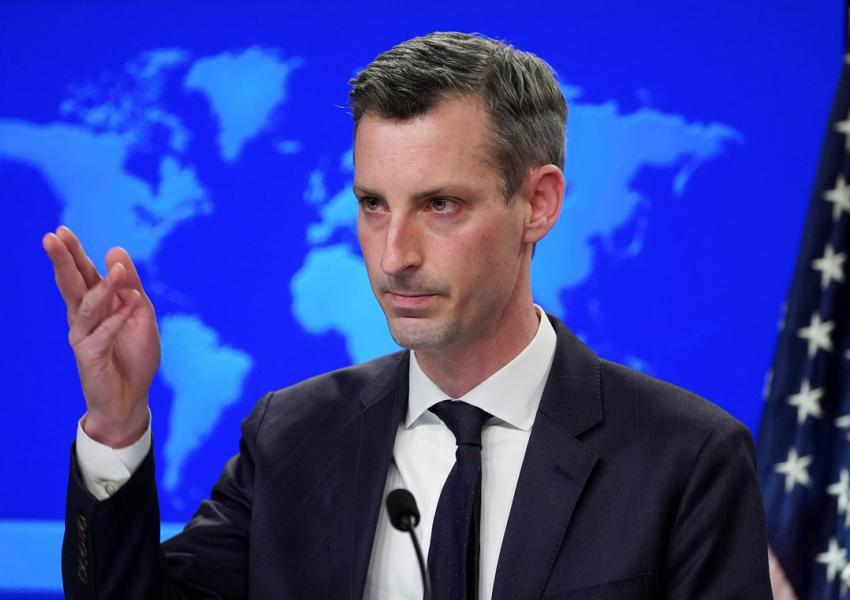 United States State Department Spokesman Ned Price on Thursday [February 11] reiterated that the administration of President Joe Biden would not accept Iran having a nuclear bomb and that Tehran’s 2015 nuclear agreement with world powers was designed to prevent it.

“As a candidate and as president, Joe Biden has been very clear,” Price told reporters in a briefing. “We will not countenance a nuclear-armed Iran…That was at the crux of the 2015 Joint Comprehensive Plan of Action [JCPOA, as the agreement is known]. It will be a guiding principle of our approach towards this challenge there, period…Iran cannot be allowed to develop a nuclear weapon.”

In his Wednesday briefing Price refused to comment on newspaper coverage of a confidential report from the International Atomic Energy Agency (IAEA) on Iran’s production this month of metallic uranium – which has both military and civilian applications, but is especially associated with warheads – saying that he had not read the report. He stressed US concern over any steps taken by Iran beyond the limits of the JCPOA, which the Trump administration abandoned in 2018.

On Wednesday the IAEA statement confirmed that Tehran had carried out its plan to produce metallic uranium (or uranium metal). Iran began breaching the terms of JCPOA step by step in 2019 in response to US President Donald Trump’s withdrawal from the deal in 2018 and imposition of draconian sanctions he called “the toughest in history.”

Price on Wednesday confronted criticism that Washington was allowing the situation to drift as Iran expanded its program in moves widely seen as increasing pressure on the US.

“We are approaching this challenge, and the urgency with which we are approaching our allies and our partners and undergoing – and undertaking these consultations with members of Congress to ensure that we have an approach to Iran that is harmonized and that’s synchronized and that has the best chance of success,” Price said. He reiterated that Washington wanted Tehran to resume full compliance “because that, for us, would open up the pathway for diplomacy” for Washington to accept its obligations under the JCPOA.

Commenting on Thursday on the possibility of an opponent of the JCPOA winning Iran’s June 2021 presidential elections on Thursday, Price said the US was not concerned with domestic Iranian politics. “We are looking at it through the lens of our national security, of the security of our partners and allies in the region,” he said. “So regardless of the constellation of actors, that will continue to be a core principle for us.”

On Wednesday Mohammad Javad Zarif, Iran’s foreign minister, issued an online video message to the Biden administration on the anniversary of Iran’s 1979 Islamic Revolution asking Washington to revive the nuclear deal “before the window of opportunity closes.”

Price on Wednesday contended that the Biden Administration did not want to negotiate with Iran in public but was consulting allies, partners and members of Congress to reach a coordinated approach before engaging with the Iranians. Russia’s Deputy Foreign Minister Sergei Ryabkov said on Thursday that “very intensive” contacts were underway between remaining JCPOA signatories – referring to Russia, Iran, China, Germany, France and the United Kingdom – as well as consultations with the US.

City officials in Iran's capital Tehran are planning to put locks on large waste containers in the streets to prevent garbage pickers from accessing waste. END_OF_DOCUMENT_TOKEN_TO_BE_REPLACED

The Biden Administration has confirmed to the US Congress that sanction imposed by its predecessor on Iran have drastically reduced Iran's trade with the world. END_OF_DOCUMENT_TOKEN_TO_BE_REPLACED

The UK government said on Sept 20 that Britain would "not rest" until all its dual nationals being held in Iran were returned home. END_OF_DOCUMENT_TOKEN_TO_BE_REPLACED