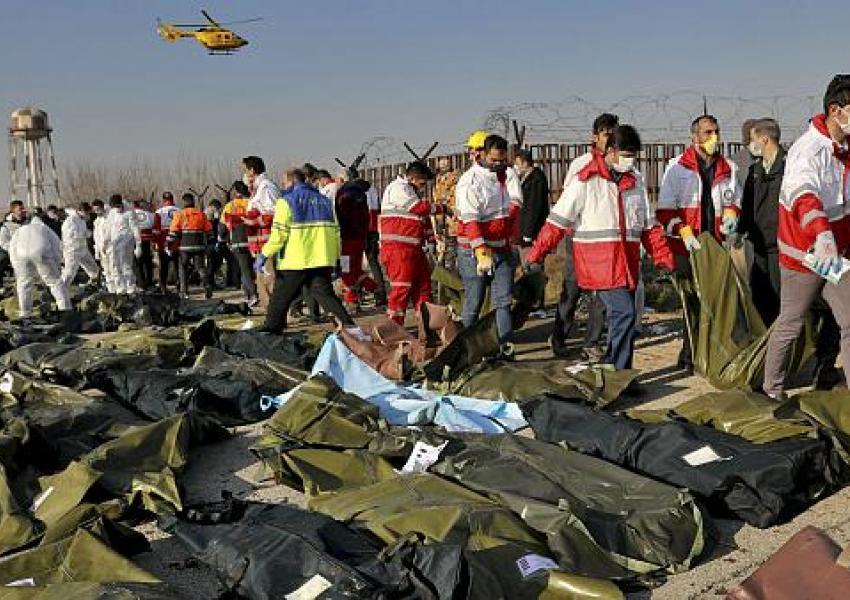 Canadian Transport Minister Omar Alghabra in an exclusive interview with Iran International TV on Friday [March 19] said Ottawa was considering "all options," including referral to the International Court of Justice and the United Nations Security Council, over Iran shooting downing a Ukrainian plane on January 8, 2020, killing tens of Canadian citizens.

Alghabra said that a report Iran released on Wednesday was incomplete, and lacked hard facts or evidence. He charged that it avoided the “real reasons” the airliner was shot down. "I wish I could say I was surprised by this report," he said.

On Wednesday Iran's Civil Aviation Organization (CAO) released its final report on the downing of Ukraine's Flight PS752 shortly after it took off from Tehran's International Imam Khomeini Airport, killing all 176 onboard. The report found that a Revolutionary Guards (IRGC) air-defense unit had fired two missiles after human error misidentified the commercial airliner as a "hostile target."

Tehran had not closed its airspace despite fearing an American response after firing ballistic missiles at a US base in Iraq in response to a US drone strike in Baghdad on January 3 that had killed Iranian general Qasem Soleimani and nine others. US commanders later said they would have retaliated against Iran if any Americans had died: 110 US soldiers suffered traumatic brain injuries.

Ukrainian Foreign Minister Dmytro Kuleba also rejected Iran’s report. On Wednesday he wrote on Facebook that it was “nothing more than a cynical attempt to hide the true reasons for the downing of our plane.” Kuleba insisted Ukraine would “not allow Iran to hide the truth, we will not allow it to avoid responsibility for this crime.”

A Canadian government agency on Thursday called for changes to global rules on air accident investigations. Kathy Fox, chair of Canada’s Transportation Safety Board (TSB), said the agency would pursue discussions at the UN’s aviation agency “in the coming weeks and months” to ensure independence in cases where state militaries brought down airliners. She said the incident had revealed limitations to rules governing such probes, which are based on an annex to the Convention on International Civil Aviation.

These rules, legally known throughout the industry as "Annex 13," allow a state to control the investigation of an incident involving its own military. “What we would like to see are changes to Annex 13 that would facilitate more transparency and independence in these unique cases where a state military has been involved in bringing down a civilian airliner,” Fox said.

The TSB said Iran’s explanation in the report was “plausible” but lacked evidence. A December 2020 report by Ralph Goodale, Special Advisor to the Canadian Prime Minister, found that while “due to the sovereignty and equality of states, the perpetrator ends up in charge of the investigation,” progress had been hampered in this case by Ottawa’s lack of diplomatic relations with Tehran since 2012 and by its designation of Iran as a ‘state sponsor of terrorism.’

In a statement released on Thursday, the Association of Families of Flight PS752 Victims dismissed Iran’s explanation of human error and called the report an "investigation of a murder by the perpetrators of the crime." They said the plane had been "intentionally targeted" and its passengers killed by "military adventurism."

The association called for “pointed, Magnitsky style sanctions" against Iran’s Revolutionary Guards for "mass murder." Following the 2009 death in a Russian prison of whistle-blower Sergei Magnitsky, the US Congress and President Barak Obama in 2012 barred certain Russian officials from the US and from access to the US banking system. Iran’s IRGC was designated as ‘terrorist’ in 2019 by the Trump administration in 2019 and most of its commanders are already sanctioned along with other Iranian leaders. A wider group of countries including Canada have designated the IRGC’s extraterritorial Quds Force.

City officials in Iran's capital Tehran are planning to put locks on large waste containers in the streets to prevent garbage pickers from accessing waste. END_OF_DOCUMENT_TOKEN_TO_BE_REPLACED

The Biden Administration has confirmed to the US Congress that sanction imposed by its predecessor on Iran have drastically reduced Iran's trade with the world. END_OF_DOCUMENT_TOKEN_TO_BE_REPLACED

The UK government said on Sept 20 that Britain would "not rest" until all its dual nationals being held in Iran were returned home. END_OF_DOCUMENT_TOKEN_TO_BE_REPLACED