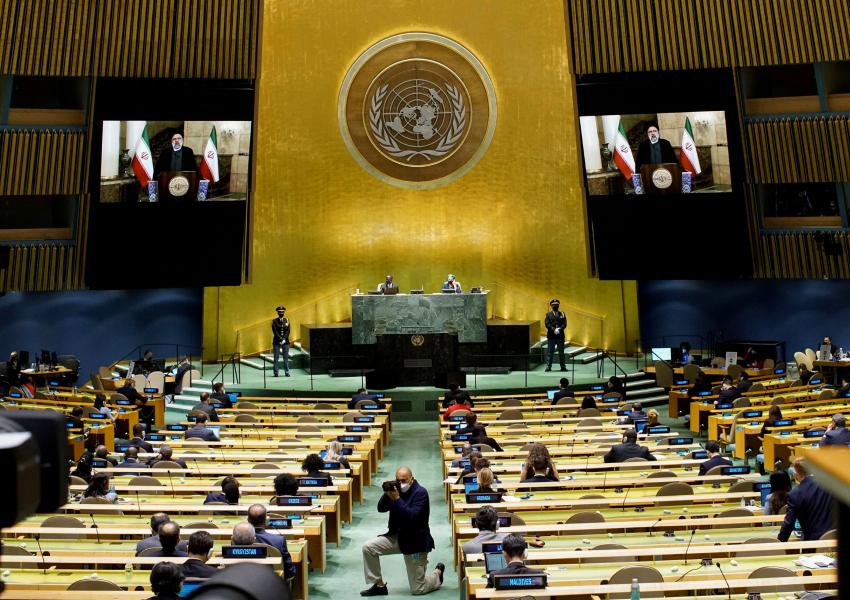 Iranian officials in the past few days have signaled a tougher position in nuclear talks with world powers by insisting on the removal of “all sanctions” imposed by former United States president Donald Trump, rather than those specifically tied to the nuclear issue. The US has so far shown no indication of agreeing.

In his pre-recorded address to the annual United Nations General Assembly meeting (UNGA) Tuesday, President Ebrahim Raisi (Raeesi) called US sanctions "crimes against humanity," expressed support for the 2015 nuclear deal, and said Iran wanted "useful talks" leading to "the lifting of all oppressive [US] sanctions."

The position echoed an earlier declaration by Iran's new nuclear chief, Mohammad Eslami, that the US should lift "all" its sanctions and quickly return to the JCPOA. Speaking to Japan's NHK, Eslami said Iran would take action step-by-step in accordance with the US.

Foreign Minister Hossein Amir-Abdollahian, in a meeting with the European Union foreign policy chief Josep Borrell in New York Tuesday evening, said the new administration was reviewing talks in Vienna aimed at reviving the 2015 deal, which the US abandoned in 2018 and imposed ‘maximum pressure’ sanctions. He said Tehran would not "waste the country's time in talks, accept counter-productive treatment by the US, or keep the country waiting due to empty promises as before."

The European signatories of the 2015 deal − the JCPOA, Joint Comprehensive Plan of Action − should pressure the US to "stop violating the agreement" instead of urging Iran to “rush” into continuing the talks, Amir-Abdollahian said.

The foreign minister criticized Washington for continuing to introduce new sanctions despite the commitment of President Joe Biden to revive the JCPOA. Tehran has said it will again accept the nuclear limits set by the JCPOA, which it began to breach in 2019, once sanctions are removed.

On Tuesday Abolfazl Zohrevand, a member of Iran's nuclear negotiation team under President Mahmoud Ahmadinejad, said new appointments at the Foreign Ministry signaled a firmer negotiating posture. Iranian media have named Zohrevand as a likely member of Iran's negotiation team, which will also include Ali Bagheri-Kani, who has replaced as deputy foreign minister Abbas Araghchi, who previously led Iran’s negotiators in Vienna.  Bagheri-Kani has expressed forthright views on the nuclear issue.

The Biden administration has suggested it will lift sanctions as required by the JCPOA. This stance leaves a grey area of sanctions imposed by Trump, including on Raisi under a Trump executive order for links to Supreme Leader Ali Khamenei, and organizations, including the Revolutionary Guards (IRGC) deemed ‘terrorists.’

The US also wants an Iranian commitment to follow-on negotiations aimed at limiting Iranian missile development and support for regional allies. Iran has not ruled out discussions on regional defense and security, but has ruled out unilateral restrictions while other states continue to expand their arsenals, including with US-supplied strike aircraft.

Raisi and supporters believe the approval of Iran's full membership in the Shanghai Cooperation Organization (SCO) last week, and the return of the Iranian economy to slight growth, show that Iran if needsbe can outlast ‘maximum pressure’ sanctions.

"Western powers now know that they cannot pressure Iran and impose their will, particularly with Iran's full membership [of the SCO] that shows Iran is not isolated," Bijan Moghadam, managing director of conservative Alef website told Nameh News Tuesday. The flagship Kayhan newspaper claimed "the change of tracks in Iran's diplomacy" had forced western powers into a weaker position regarding Iran’s return the talks in Vienna.

Iran's currency has dropped to its lowest level in one year due to pessimism over the chances of success in nuclear talks with the West. END_OF_DOCUMENT_TOKEN_TO_BE_REPLACED

A French presidency official has told reporters that Iran must return to nuclear talks with world powers to avoid an escalation. END_OF_DOCUMENT_TOKEN_TO_BE_REPLACED

Iran has rejected a US call to grant UN inspectors access to a nuclear site, saying Washington was not qualified to demand inspections without condemning a sabotage attack on the facility END_OF_DOCUMENT_TOKEN_TO_BE_REPLACED

The head of Iran's atomic energy organization, Mohammad Eslami, has arrived in Moscow for talks with the chief executive of Russian state nuclear firm Rosatom. END_OF_DOCUMENT_TOKEN_TO_BE_REPLACED