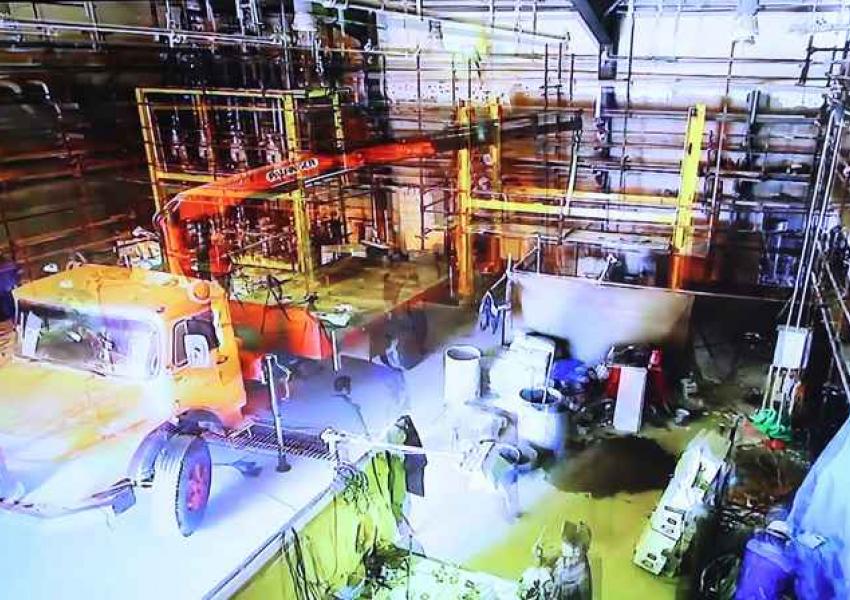 Iran's President Hassan Rouhani has said during a ceremony to mark the National Nuclear Technology day on Saturday that "Iran's nuclear activities are peaceful and for non-military purposes," andding, “We continue to be committed to our pledge to the Non-Proliferation Treaty (NPT).

Ironically, the ceremony included the injection of uranium gas into 164 IR-6 uranium enriching centrifuge machines, 30 IR-5 centrifuges, and mechanical tests on IR-9 machines with the capacity of 50 early IR-1 machines. This was in breach of the restrictions called for by the 2015 nuclear agreement between Iran and world powers.

The official government IRNA website also announced that a facility in the Natanz Nuclear center that was destroyed in a mysterious explosion last Julyu has been reconstructed and will soon resume production. The facility is for building uranium enriching centrifuge machines.

Meanwhile, following the first round of "indirect talks" in Vienna between Iran and the United States, Deputy Foreign Minister Abbas Araqchi who led the Iranian delegation said that agreement must be reached in about six weeks or the process of reviving the nuclear deal, also called the Joint Comprehensive Plan of Action (JCPOA), will become more complicated. He also insisted that 1,500 US sanctions must be removed, meaning all terrorism-rlated sanctions, a task politically difficult for the Biden Administration.

But still Iran appears to be far from speaking in one vice about developments surrounding the JCPOA. Mohammad Baqeri, the chief of the joint staff of the Iranian armed forces charged in Tehran on Saturday that the United States is trying to carry out "useless long talks" on the revival of the deal.

Another Iranian military official, Civil Defense Chief General Gholamreza Jalali also said on Saturday that "The only thing the United States can do now is accept a nuclear Iran." He claimed that Iran defeated the US maximum pressure policy.

Incidentally, Iranian military commanders' intervention in the talks about the deal, is contrary to Rouhani's statement about the non-military nature of Tehran's nuclear activity.

During the past months, Iran has been demanding the US return to the nuclear deal that former US President Donald Trump left in 2018, and lifting all the sanctions on Tehran, while the United States wants Iran to end its deviation from the JCPOA and come back to full compliance.

In another development on Saturday, Foreign Ministry Spokesman Saeed Khatibzadeh said once again during an interview with CNN that there is no need for talks between Iran and the United States over the JCPOA. He said "Iran's positions on the matter are quite clear. It was the United States that pulled out of the nuclear deal, and it is hard for everyone in Iran to trust the US after that. So, the US knows what it needs to do if it wants to return to the deal."

But as one official claimed on Staurday that "Iran has had 133 advances over the past year in the country's nuclear industry,” Parliament Speaker Mohammad Bagher Ghalibaf remarked that while the Rouhani administration boasts about progress, it cannot supply chicken meat to the people who have to stand in long lines. He said this undermines the nation's dignity.

Meanwhile, hardline media including Khamenei-funded Kayhan and IRGC mouthpiece Javan newspapers constantly question Rouhani and Zarif's moves to come to terms with the United States over the JCPOA and sanctions. While, Rouhani has claimed at a cabinet meeting that the US delegation's presence in Vienna shows that it has “repented” from sanctioning Iran, Kayhan's editor Hossein Shariatmadari questioned the president's statement and asked: "Mr. President, when and where the US has said it wants to repent?"

On the contrary, Shariatmadari said, "The US has been insisting that Iran should stop its missile program and its presence in the region” as part of a new deal it demands.

City officials in Iran's capital Tehran are planning to put locks on large waste containers in the streets to prevent garbage pickers from accessing waste. END_OF_DOCUMENT_TOKEN_TO_BE_REPLACED

The Biden Administration has confirmed to the US Congress that sanction imposed by its predecessor on Iran have drastically reduced Iran's trade with the world. END_OF_DOCUMENT_TOKEN_TO_BE_REPLACED

The UK government said on Sept 20 that Britain would "not rest" until all its dual nationals being held in Iran were returned home. END_OF_DOCUMENT_TOKEN_TO_BE_REPLACED