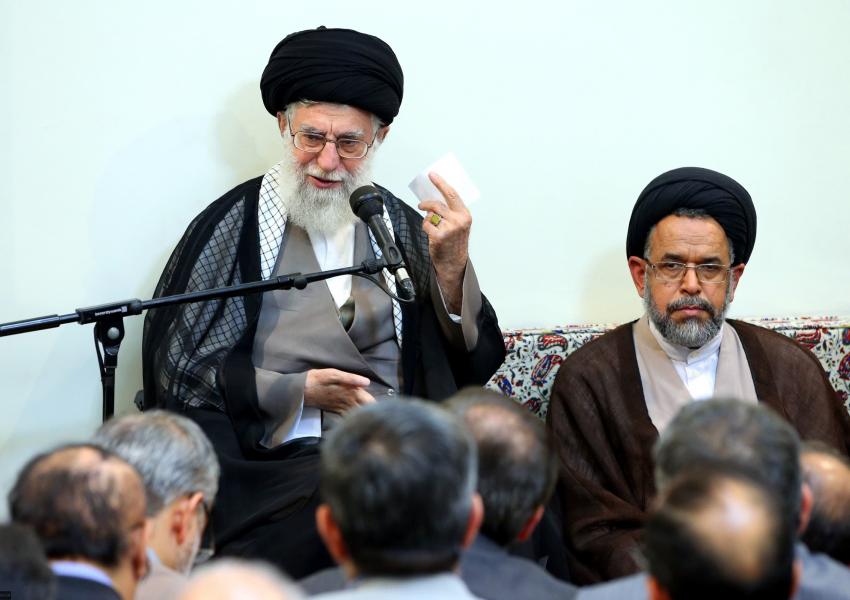 Iran Parliament To Question Minister Over Suggestion To Make Nukes

Ali Khezrian, a leading member of the Iranian parliament (Majles) says Intelligence Minister Mahmoud Alavi's recent suggestion about Iran developing nuclear weapons "could create problems for the Islamic Republic." Alavi had said in an interview on live TV on February 10 that Iran might have to develop nuclear weapons if “backed into a corner”.

Khezrian said several members of the parliament have tabled a motion to question the Intelligence Minister about his "politically costly" remarks. He added Alavi's remarks were in contravention of his status as an official who should make the country secure.

The IRGC-affiliated news agency Tasnim earlier ran a commentary against Mr. Alavi stating that his "odd" comments went against the country’s national interests, as well as being against “the policies of the Islamic Republic and its leader.”

Despite these criticisms, it is hard to imagine that the intelligence minister would have made such a gaff on state television and not retracted his comments. Islamic Republic officials in fact have been threatening to escalate their nuclear program if the United States does not lift “all sanctions” this month. They have threatened to reduce the International Atomic Energy Agency’s (IAEA) inspections and they have produced uranium metal that can be used in the core of a nuclear bomb.

The warnings have been coming for President Joe Biden that time is running out for making a deal with Iran. With the country being out of oil revenues, Tehran seems desperate to lift the crippling sanctions imposed by former President Donald Trump after he exited the 2015 nuclear agreement, the JCPOA in May 2018.

At the same time, some Iranian media and officials have criticized Alavi’s remarks, either for domestic political reasons or for balancing the negative impact his threat would make around the world.

State Department spokesman Ned Price reacted to Alavi’s remark by saying, "it’s not yet clear to us that Mahmoud Alavi was speaking for anyone but himself. I would say that we, of course, took note of those remarks. They are very concerning. Would also note..that Iran has an obligation under the Nuclear Non-Proliferation Treaty – the NPT – never – never, never, never – permanent prohibition to acquire nuclear weapons, and it reaffirmed that commitment under the JCPOA. I think that’s where we’d leave our reaction."

Nonetheless, in equally surprising remarks, the chairman of the Iranian parliament's research center Alireza Zakani said on Sunday February 14, that IAEA inspectors should leave Iran soon if Tehran withdraws from its obligation under the Additional Protocol. "Then it would be too late for US and European partners to the nuclear deal with Iran to return to the negotiations,” he said.

President Joe Biden and his chief diplomat Antony Blinken have said that the United States is willing to return to the JCPOA nuclear deal but first Iran should return to full compliance under the deal.

Following President Trump's withdrawal from the JCPOA in 2018, Iran waited for a year before starting to reduce its obligations under the JCPOA. Currently, Iran has exceeded the agreed limitations on uranium enrichment and has introduced modern centrifuges in its nuclear plants that are beyond the number and level agreed in the JCPOA.

However, none of these breaches have been as serious as Alavi's suggestion that if Iran is pushed toward making nuclear bombs, Tehran can no longer be blamed.

Regional players particularly Israel have said over and over during the past year that they cannot tolerate an Iranian bomb and will do everything to stop it.

Also, adding to the concerns about Tehran's nuclear program is the production of uranium metal which has prompted the EU-3, the United Kingdom, France and Germany, to call the move "a key step in manufacturing nuclear weapons."

City officials in Iran's capital Tehran are planning to put locks on large waste containers in the streets to prevent garbage pickers from accessing waste. END_OF_DOCUMENT_TOKEN_TO_BE_REPLACED

The Biden Administration has confirmed to the US Congress that sanction imposed by its predecessor on Iran have drastically reduced Iran's trade with the world. END_OF_DOCUMENT_TOKEN_TO_BE_REPLACED

The UK government said on Sept 20 that Britain would "not rest" until all its dual nationals being held in Iran were returned home. END_OF_DOCUMENT_TOKEN_TO_BE_REPLACED