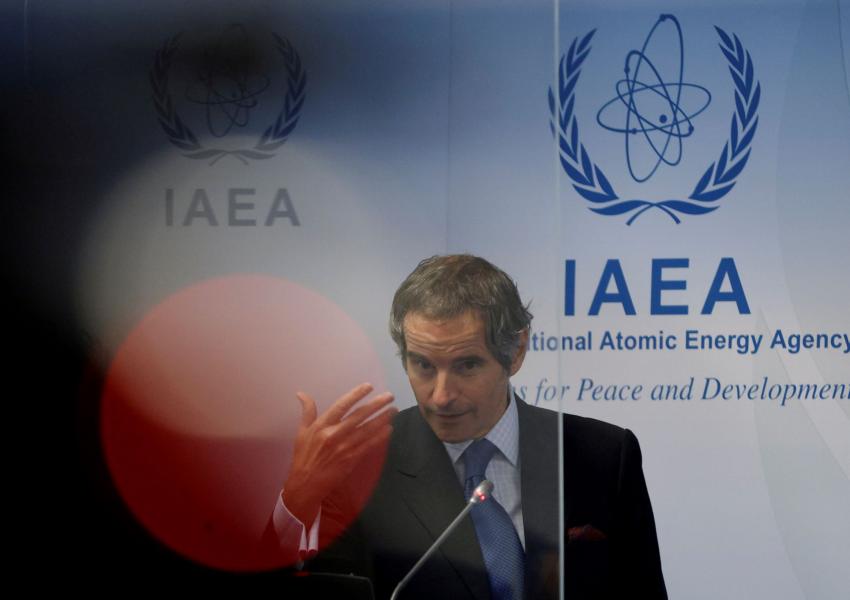 Speaking to Fars News Saturday, Khatibzadeh was more restrained than some recent comments from Iranian officials more critical of the IAEA.

“There were technical issues between Iran and the IAEA in recent months that both sides tried to resolve within the framework of bilateral cooperation and this trip is also within the framework of attempts to resolve existing issues,” Khatibzadeh said. “I hope that the [IAEA] Board will not take steps influenced by some pressures which can destroy the regular path of cooperation between Iran and the agency.”

Grossi this week submitted two reports to IAEA board of governors critical of Iran both over reducing its level of cooperation with the agency and over what it regards as inadequate explanations over past nuclear work.

On Monday, the IAEA Board will meet and the reports about Iran will be discussed, with some observers suggesting the United States will propose a resolution criticizing Tehran.

Kazem Gharibabadi, Iran’s ambassador to the United Nations bodies in Vienna including the IAEA, Friday warned that any punitive action taken by the IAEA board could jeopardize talks to revive Tehran’s 2015 nuclear agreement with world powers, the JCPOA (Joint Comprehensive Plan of Action).

“IAEA cannot disassociate itself from the destiny of the JCPOA,” Gharibabadi tweeted Thursday. “Any counterproductive action disrupts the negotiation process.”

While the IAEA’s role is primarily technical in monitoring compliance with the Nuclear Non-Proliferation treaty, its board is made up of 35 member states. In 2006, the board referred Iran to the UN Security Council, which subsequently imposed sanctions.

In contrast to Khatibzadeh’s emphasis on the technical nature of the IAEA role, the flagship hardliner newspaper Kayhan warned Saturday that the IAEA board meeting was a political event and has little to do with Iran’s cooperation with the agency’s monitoring.

The newspaper said that the former Trump administration national security chief Robert O’Brien had “put Grossi in charge of IAEA.” The agency chief was appointed in 2019 with Washington’s support after the US had been critical of some earlier IAEA chiefs.

Iran’s negotiations with world powers in Vienna − including the US indirectly − aimed at restoring the 2015 nuclear agreement, which the US abandoned in 2018, have been in abeyance since the June presidential election in Iran as the new administration of President Ebrahim Raisi (Raeesi) assembles its foreign policy team.

But there is also a sense, especially in Europe, that Iran may be delaying the process as a means to strengthen its negotiating position, especially in securing the removal of US sanctions. The US Secretary of State Antony Blinken warned this week that time was running out to revive the JCPOA.

President Joe Biden came to office committed to restoring the JCPOA but has continued the ‘maximum pressure’ sanctions introduced by the Trump administration in 2018. Iran has meanwhile continued its nuclear program, including enriching uranium to 60 percent, beyond the JCPOA limits.

The effect of any rebuke of Iran at the IAEA Board meeting is unclear. Russia – who alongside China, France, Germany and the United Kingdom is part of the talks of remaining JCPOA signatories in Vienna – this week criticized the US and Europe for what it said were attempts to use “political leverage” against Tehran. “This is logically wrong – instead of fuelling tensions and boosting pressure, we should show restraint and find a way to resume talks,” Russian Deputy Foreign Minister Sergei Ryabkov said Wednesday.

Iran reduced its cooperation with the IAEA to the level required by the Nuclear Non-Proliferation Treaty in response to last years killing of a nuclear scientist and attacks on its atomic sites, widely attributed to Israel. Iran decision came also after candidate Joe Biden signalled he would return to JCPOA and lift sanctions on Iran. Both the Additional Protocol and the JCPOA gave the agency greater access to Tehran’s nuclear program

Iran's president Ebrahim Raisi addressed the UN General Assembly saying his country wants a resumption of nuclear talks with world powers to lead to the removal of US sanctions. END_OF_DOCUMENT_TOKEN_TO_BE_REPLACED

President Joe Biden told the UN General Assembly on September 21 that he will prevent Iran from getting nuclear weapons. END_OF_DOCUMENT_TOKEN_TO_BE_REPLACED

India has seized nearly three tons or $2.72 billion worth of Afghan heorin shipped from Iran. END_OF_DOCUMENT_TOKEN_TO_BE_REPLACED

Iran's foreign ministry spokesman has said that nuclear talks with world powers will start in a few weeks but has not given a firm date. END_OF_DOCUMENT_TOKEN_TO_BE_REPLACED