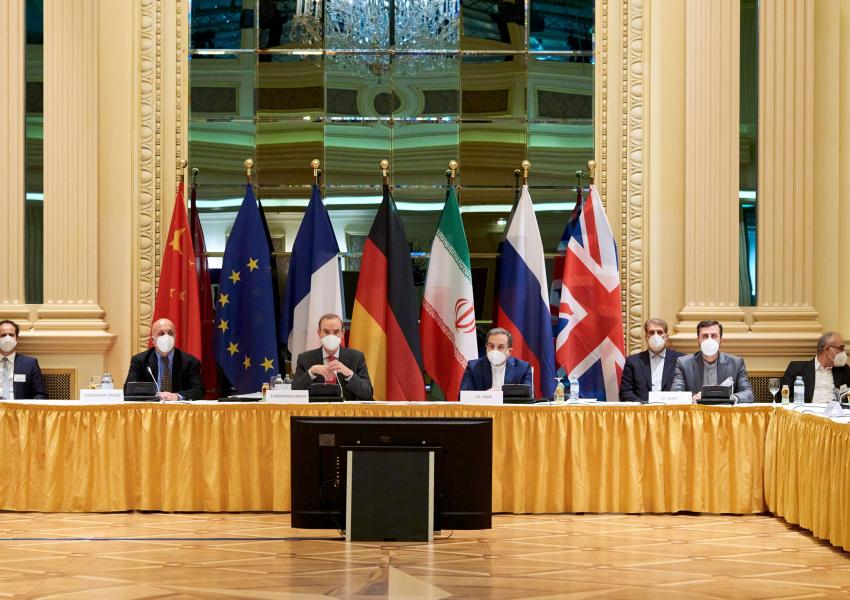 Ali Bagheri Kani, a relative of Supreme Leader Ali Khamenei was a member of Iran's nuclear negotiating team during former President Ahmadinejad's tenure when Iran's nuclear diplomacy failed and international sanctions were imposed. Before his appointment observers opined that the change could suggest Iran is likely to shift to a tougher stance in the nuclear talks.

The change was rumored in Tehran for a while as it was expected that the new anti-Western and hardliner foreign minister Hossein Amir-Aabdollahian would replace people closely associated with his predecessor, Mohammad Javad Zarif. Araghci was appointed as "advisor" to the foreign minister.

Earlier on Tuesday, media and political observers in Iran expressed optimism in the future of talks over the 2015 nuclear deal after Tehran made a deal with the International Atomic Energy Agency (IAEA) on Sunday to allow limited monitoring of its nuclear installations.

Iran’s agreement with the IAEA came after two critical reports the agency produced on September 7 criticizing Iran and raising the prospect of some punitive vote against Tehran.

The official government news agency IRNA wrote in a commentary Tuesday : "Various countries have welcomed the agreement between Iran and the IAEA and diplomats everywhere have called it a new chance for diplomacy." IRNA added that the agreement can pave the way for resuming the Vienna talks aimed at reviving the Joint Comprehensive Plan of Action (JCPOA).

According to IRNA, several EU and US officials have also welcomed the agreement, calling on Iran to return to the talks and have ruled out any diplomatic measures against Iran. But IRNA noted that according to Iranian Foreign Minister Hossein Amirabdollahian, it will take Iran around three months to prepare for resuming the negotiations.

Newspapers in Tehran were also upbeat about the prospects for the resumption of talks. Reformist daily Ebtekar in a commentary on Tuesday called the agreement a prelude to the resumption of negotiation over the JCPOA and preventing any security council measures against Tehran.

Aftab Yazd, another reformist daily on its frontpage called on the Raisi administration to opt for direct talks with the West, and in fact with the United States, the only JCPOA player that has not been involved directly in the talks in Vienna and negotiated with Iran through other JCPOA partners.

Meanwhile, a commentary in Etemad daily suggested that the Raisi administration is likely to follow the same policy as its predecessor regarding the nuclear issue. Etemad expressed hope that all parties would return to negotiations in Vienna with "a new understanding of the realities on the ground."

The only Iranian paper on Tuesday that preserved its defiant stance about the nuclear talks was the hardliner Kayhan, affiliated with Supreme Leader Ali Khamenei's office. The paper maintained that nothing has changed in Iran's relations with the IAEA and that the Iranian parliament’s December 2020 law to reduce its commitments under the JCPOA is still being implemented. Kayhan accused those who are upbeat about the agreement with the IAEA of "distorting reality."

In the meantime, analysts and reporters close to Iran's foreign ministry suggested that changes are underway at the ministry which might indicate a shift to a tougher position regarding the nuclear talks.

International law expert and foreign policy analyst Reza Nasri wrote in a series of tweets on Monday that the Raisi administration is appointing some figures on the nuclear negotiating team who have been opposing the JCPOA.

Nasri warned that "In the same way that the appointment of former National Security Adviser John Bolton and former Secretary of State Mike Pompeo in the United States made Iran believe that the Trump Administration was not after reaching an agreement, appointing prominent anti-JCPOA figures in the Iran as nuclear negotiators will give an opportunity to US lobbies, media, and propaganda agencies to convince the US Administration and public opinion that Iran is simply wasting time or is buying time."

Iran's president Ebrahim Raisi addressed the UN General Assembly saying his country wants a resumption of nuclear talks with world powers to lead to the removal of US sanctions. END_OF_DOCUMENT_TOKEN_TO_BE_REPLACED

President Joe Biden told the UN General Assembly on September 21 that he will prevent Iran from getting nuclear weapons. END_OF_DOCUMENT_TOKEN_TO_BE_REPLACED

India has seized nearly three tons or $2.72 billion worth of Afghan heorin shipped from Iran. END_OF_DOCUMENT_TOKEN_TO_BE_REPLACED

Iran's foreign ministry spokesman has said that nuclear talks with world powers will start in a few weeks but has not given a firm date. END_OF_DOCUMENT_TOKEN_TO_BE_REPLACED