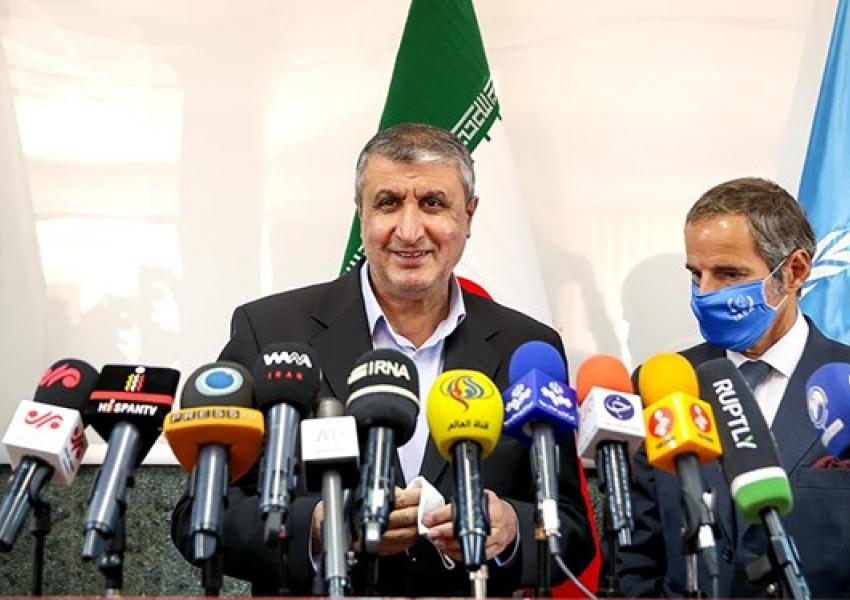 This may reduce pressure building on Tehran, which reduced its cooperation with the agency in February, in the run-up up to the annual general meeting of IAEA member states on September 20-24.

"We agreed over the replacement of the memory cards of the agency's cameras," said Mohammad Eslami, head of the Atomic Energy Organization of Iran (AEOI), the semi-official agency ILNA reported.

Back in February – as Iran reduced the access of the IAEA to that required by the Nuclear Non-Proliferation Treaty – Grossi reached an agreement for Tehran to allow the IAEA to keep cameras in place without having immediate access to the footage, with Iran retaining the option of destroying the footage once the agreement expired.

Grossi told reporters in Tehran it was “very important” and that “our talks led to constructive result for the continuation of our monitoring equipment,” Fars news agency reported.

Grossi said that in his first meeting with Eslami, recently appointed AEOI chief, he had discussed “important technical issues.” He said that Eslami would attend the IAEA general meeting, at which the AEOI chief would continue negotiations in Grossi’s office, followed by another Grossi visit to Tehran.

Eslami said that relations between Tehran and the agency were technical and “politics has no role in our relationship.” He confirmed that agency experts would travel to Iran to change the memory cards and that there would be talks on its “side-lines” of the IAEA general meeting.

Grossi has recently produced two reports critical of Iran, one over the level of current cooperation with the agency and one over Iran’s answer questions over past nuclear work. There have been suggestions that the United States might raise a resolution critical of Iran at the IAEA general meeting or board.

Eslami was appointed AEOI after new Iranian president Ebrahim Raisi (Raeesi) took office in August and the agreement with Grossi may indicate a more nuanced approach from the new Iranian administration than some analysts have suggested.

Talks in Vienna to revive Iran’s 2015 nuclear deal with world powers, the JCPOA (Joint Comprehensive Plan of Action), were suspended in April pending the transition to Iran’s new government. The length of the lapse has led to suggestions, especially in Europe – where France, Germany and the United Kingdom are JCPOA signatories – that Tehran is trying to establish ‘facts on the ground’ to strengthen its negotiating position.

The United States withdrew from the JCPOA in 2018, imposing ‘maximum pressure’ sanctions on Iran that President Joe Biden has continued despite a commitment to revive the 2015 deal.

Iran has since 2019 expanded its nuclear program beyond JCPOA limits. Following last November’s killing of an Iranian nuclear scientist and attacks on its nuclear facilities, widely attributed to Israel, Iran has more significant expanded the program, including enriching uranium to 60 percent, far above the 3.67 percent allowed under the JCPOA and close to the 90 percent considered ‘weapons grade.’

Parliamentary legislation passed late last year limited the access that IAEA had under Iran’s NPT Additional Protocol and the JCPOA, leading Grossi to argue his ability to monitor the program was severely restricted.

Iran's president Ebrahim Raisi addressed the UN General Assembly saying his country wants a resumption of nuclear talks with world powers to lead to the removal of US sanctions. END_OF_DOCUMENT_TOKEN_TO_BE_REPLACED

President Joe Biden told the UN General Assembly on September 21 that he will prevent Iran from getting nuclear weapons. END_OF_DOCUMENT_TOKEN_TO_BE_REPLACED

India has seized nearly three tons or $2.72 billion worth of Afghan heorin shipped from Iran. END_OF_DOCUMENT_TOKEN_TO_BE_REPLACED

Iran's foreign ministry spokesman has said that nuclear talks with world powers will start in a few weeks but has not given a firm date. END_OF_DOCUMENT_TOKEN_TO_BE_REPLACED