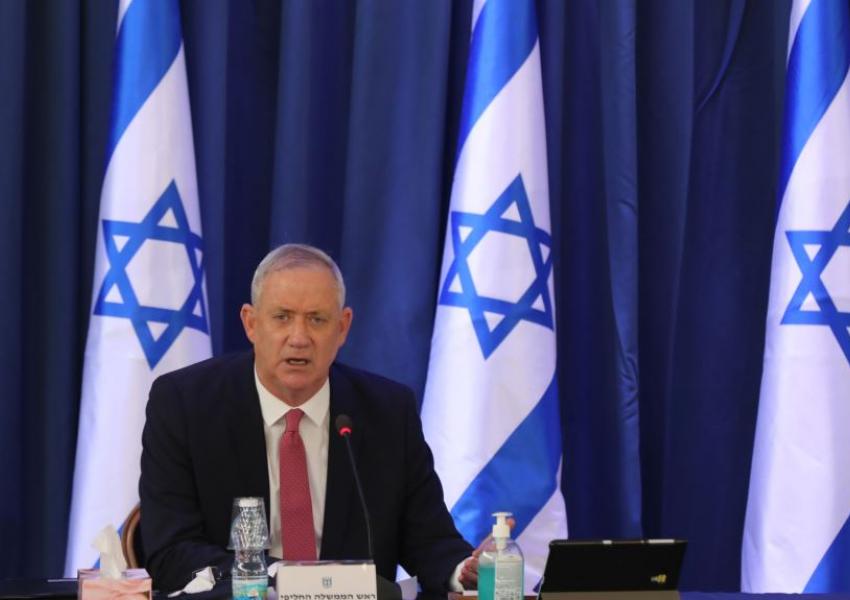 In a fresh warning on Iran Tuesday, Israeli Defense Minister Benny Gantz vowed that “Israel will not stand by while Iran advances its nuclear program,” as he toured the army’s Northern Command, where tensions have risen in recent days with Iran-backed Lebanese Hezbollah.

Israel often warns about Iran being close to developing a nuclear weapon, but what has changed is Tehran’s open attempt since early this year to boost uranium enrichment to near weapons-grade purity. Tehran says it already has more than 60 kilograms of 20-percent enriched fissile material and 2.5 kg of 60-percent purified stock. To reach the 90-percent enriched uranium level needed for a bomb is just a matter of time.

With the Vienna nuclear negotiations with Tehran in limbo, Iran keeps the threat of weaponization strong to extract more concessions from the United States. Whether it will take that rout is a big unknown but keeping everyone guessing has always been a cornerstone of nuclear strategies going back to the Cold War.

Nuclear weapons are not Israel’s only concern. Iran has armed its Palestinian and Lebanese proxies to a high level, as the 11-day war in May showed, with Hamas firing more than 3,000 rockets at Israel.

Israel, the United States and Britain have also accused Iran of being behind a deadly attack on an Israeli-managed tanker in the Sea of Oman on July 29. Israel has taken the incident to show the West that Iran cannot be trusted.

“Just as we saw in the maritime attack, which claimed the lives of two foreign nationals, Iran is the greatest threat to global and regional peace. Israel will not stand by while Iran advances its nuclear program. We call on the international community to take action and stop Iranian aggression. This is the time for joint action,” Gantz said.

The defense minister in the post-Netanyahu government also repeated the standard Israeli position. “At the same time, we will continue to defend ourselves against the Iranian attempt to become an existential threat to the State of Israel and to transfer advanced munitions to its proxies on our borders. We will operate in the time and place and via the means that we will determine.”

Israel’s Channel 12 reported that Barnea told Burns Iran’s new president Ebrahim Raisi is untrustworthy and incapable of negotiating a new nuclear deal. According to the report, Barnea gave Burns documents on Raisi that allegedly portrayed him as exceptionally extreme, cruel and unstable.

The channel did not name a source for this claim but reported that the Mossad chief described Raisi as mentally disturbed.

Israeli regional expert Seth Frantzman in an article in the Jerusalem Post has argued that Iran has a regional pre-emption doctrine to deter any punitive action against its interests in the Persian Gulf. As it attacked the tanker near Oman, Hezbollah fired rockets at Israeli positions, showing that Tehran has a host of options for escalation.

So far, the US and UK threats of consequences for the attack on the tanker have not materialized, because of lingering hopes to bring back Iran to the negotiating table in Vienna.

Iran's president Ebrahim Raisi addressed the UN General Assembly saying his country wants a resumption of nuclear talks with world powers to lead to the removal of US sanctions. END_OF_DOCUMENT_TOKEN_TO_BE_REPLACED

President Joe Biden told the UN General Assembly on September 21 that he will prevent Iran from getting nuclear weapons. END_OF_DOCUMENT_TOKEN_TO_BE_REPLACED

India has seized nearly three tons or $2.72 billion worth of Afghan heorin shipped from Iran. END_OF_DOCUMENT_TOKEN_TO_BE_REPLACED

Iran's foreign ministry spokesman has said that nuclear talks with world powers will start in a few weeks but has not given a firm date. END_OF_DOCUMENT_TOKEN_TO_BE_REPLACED