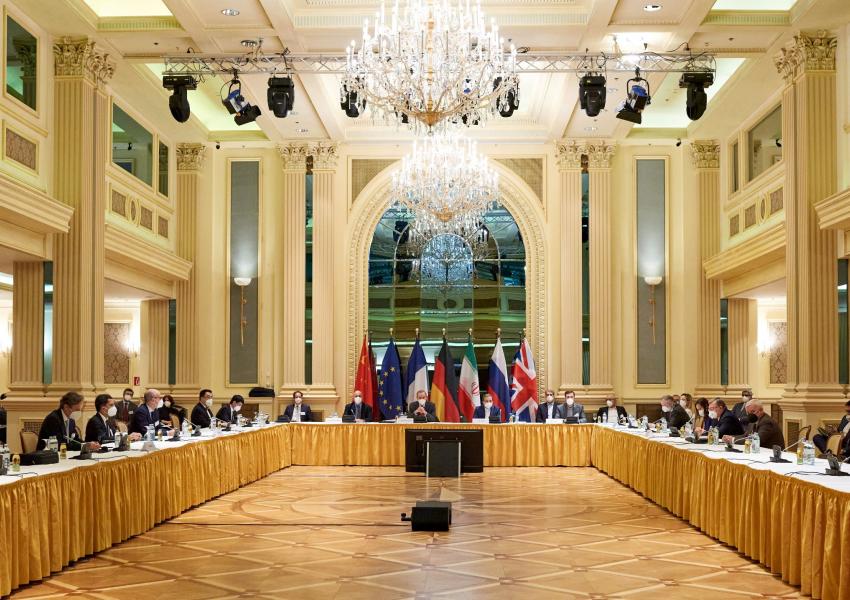 President Hassan Rouhani Thursday said Thursday that agreement in principle had been reached with world powers in Vienna to revive Iran’s 2015 nuclear deal and that the United State had agreed to lift oil, petrochemical, shipping, insurance, and banking sanctions as it returned to the agreement, the JCPOA (Joint Comprehensive Plan of Action).

Speaking via video-link to the inauguration of a petrochemical facility, Rouhani said the “big step” had been taken although "fine details and minor issues” remained to be resolved. But some of the delegates in the Vienna talks and Iran’s Deputy Foreign Minister Abbas Araghchi had said Wednesday that still key issues remained to be resolved.

Press TV also claimed its informed sources suggested Iran was demanding the US should agree never to activate the “snapback” mechanism of the nuclear deal – which allows reimposition of sanctions should Tehran violate the JCPOA – and should offer compensation for all Iran’s financial losses since Trump imposed draconian sanction in 2018 after withdrawing the US from the JCPOA.

The Iranian government in early May criticized the state broadcaster IRIB, particularly Press TV, for constantly claiming that the Vienna talks were on the brink of failure due to US refusal to accept Iranian demands.

Rouhani and his government have been under attack in recent days from principlists registered to stand in the June 18 presidential election for what they say are futile negotiations with world powers. On Wednesday Rouhani reminded them that the talks were conducted under the supervision of Supreme Leader Ali Khamenei.

Araghchi said participating delegations would return to their capitals for consultation over disagreements that remained on "some of the key points."

Enrique Mora, the European Union official chairing the talks wrote in a tweet Wednesday that an agreement was “shaping up” with a common understanding on what was needed for the US to return to the JCPOA in terms of lifting sanctions and for Iran to reverse steps taken in its nuclear program beyond JCPOA limits. Mora declined to give reporters a date for a final agreement.

Iranian representatives, Mora said, were meeting officials of the International Atomic Energy Agency (IAEA) in Vienna on extending the three-month monitoring deal that expires on Friday after which Iran may shut down IAEA cameras at its nuclear facilities. The IAEA said in a statement Thursday that it would provide an update within days. France, Germany, and the UK in a statement Wednesday stressed the importance of IAEA access continuing at its current level.

City officials in Iran's capital Tehran are planning to put locks on large waste containers in the streets to prevent garbage pickers from accessing waste. END_OF_DOCUMENT_TOKEN_TO_BE_REPLACED

The Biden Administration has confirmed to the US Congress that sanction imposed by its predecessor on Iran have drastically reduced Iran's trade with the world. END_OF_DOCUMENT_TOKEN_TO_BE_REPLACED

The UK government said on Sept 20 that Britain would "not rest" until all its dual nationals being held in Iran were returned home. END_OF_DOCUMENT_TOKEN_TO_BE_REPLACED