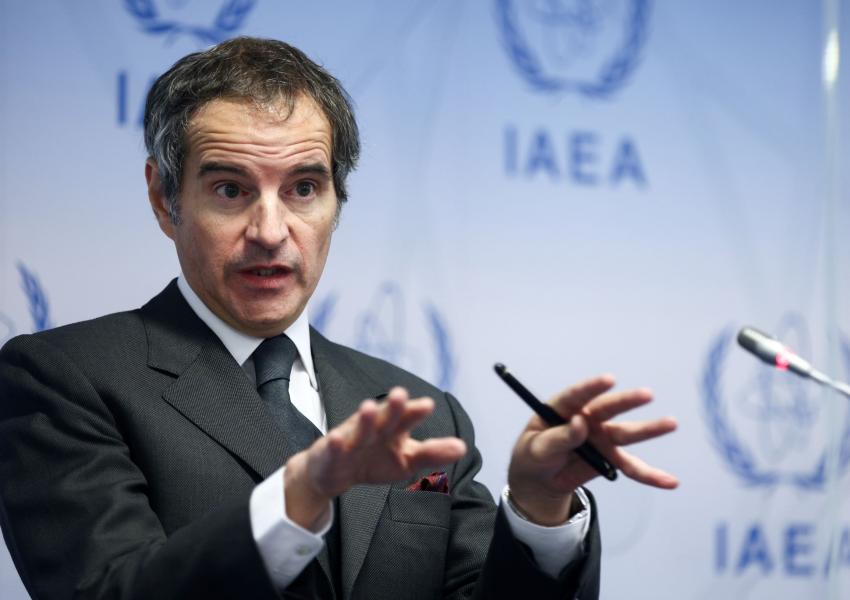 Grossi said that a news briefing scheduled for Sunday had been postponed due to a “last-minute issue that required future consultation.” The IAEA chief said he had had a long discussion with Ali Akbar Salehi, head of the Atomic Energy Organization of Iran, Monday.

With the extension of the arrangement – which Grossi called a “temporary technical understanding” – Grossi said data collected by the IAEA’s technical equipment in Iran’s atomic sites would “be saved and will continue to be [saved].” He added that the fate of the data at the end of the month would need be reviewed later. All equipment – “cameras, flow meters and electronic on-line meters” – would “continue as they are now for one month.”

Grossi reminded reporters that the interim arrangement did not allow the IAEA the same level access as had been possible when Iran was implementing both the Additional Protocol, an add-on to its obligations under the Nuclear Non-Proliferation Treaty, and the Joint Comprehensive Plan of Action, its 2015 deal with world powers. Grossi said the interim arrangement was a “stop-gap measure…a way of avoid flying completely blind, [and] losing essential information.”

Since early April Iran has been in talks in Vienna trying to revive the JCPOA, which the United States left in 2018 before imposing draconian sanctions on Iran. The US is participating in the talks indirectly, with formal talks in the JCPOA Joint Commission restricted to remaining JCPOA signatories – China, France, Germany, Iran, Russia, and the United Kingdom.

The talks are focused on which US sanctions would need to be lifted, and which steps taken in the Iran nuclear program since 2019 would need to be reversed, and how process might be sequenced in order to put the JCPOA back in place.

Following the assassination in November of Iranian nuclear scientist Mohsen Fakhrizadeh, the Iranian parliament passed legislation requiring Iran to reduce co-operation with the IAEA to that required under the NPT and to expand the nuclear program further by upping enrichment levels well beyond the 3.67 percent allowed under the JCPOA.  Iranian opponents of the 2015 deal have also stepped up attacks on the government of President Hassan Rouhani in the run-in to the June 18 presidential election, when Rouhani is ineligible to seek a third successive term.

In response to a question from Iran International TV correspondent Ahmad Samadi over a claim reportedly by a member of Iran’s Supreme National Security Council (SNSC) that Iran had set “conditions” for the extending the arrangement, Grossi said the IAEA “never accepts any conditions for its mandate…and its activities.” The IAEA chief pointed out that the agency’s authority was based on signed agreements - the Additional Protocol, the NPT, and bilateral agreements with member states. “There are no conditions, and no conditionalities,” he said. “Absolutely not.”

City officials in Iran's capital Tehran are planning to put locks on large waste containers in the streets to prevent garbage pickers from accessing waste. END_OF_DOCUMENT_TOKEN_TO_BE_REPLACED

The Biden Administration has confirmed to the US Congress that sanction imposed by its predecessor on Iran have drastically reduced Iran's trade with the world. END_OF_DOCUMENT_TOKEN_TO_BE_REPLACED

The UK government said on Sept 20 that Britain would "not rest" until all its dual nationals being held in Iran were returned home. END_OF_DOCUMENT_TOKEN_TO_BE_REPLACED