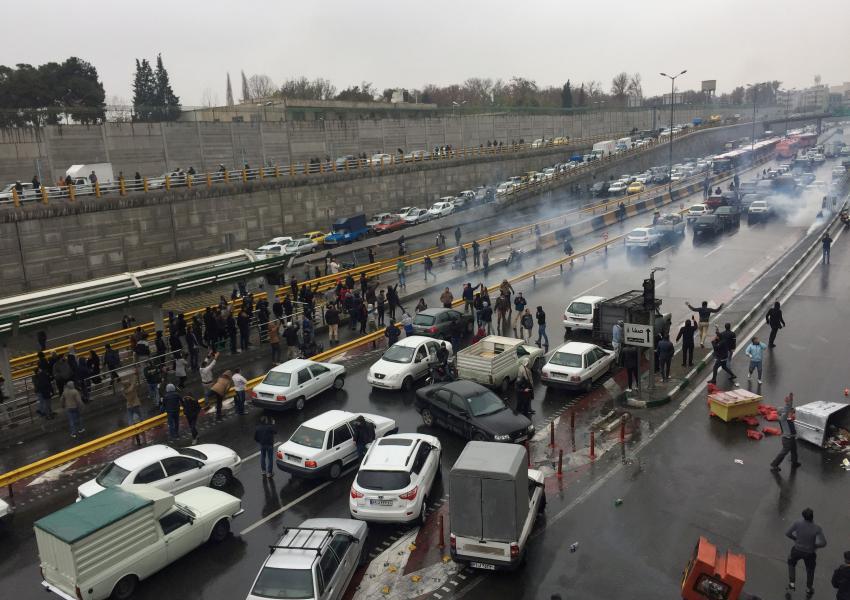 In an exclusive report on Monday, Reuters revealed that according to three of Iran’s Interior Ministry officials, during the country-wide protests in Iran, around 1500 protesters were killed, including 440 women and 17 teenagers. The number has been gathered from morgues, hospitals, coroner’s offices, and security forces.

(Reuters) By Nov. 17, the second day, the unrest had reached the capital Tehran, with people calling for an end to the Islamic Republic and the downfall of its leaders. Protesters burned pictures of Khamenei and called for the return of Reza Pahlavi, the exiled son of the toppled Shah of Iran, according to videos posted on social media and eyewitnesses.

That evening at his official residence in a fortified compound in central Tehran, Khamenei met with senior officials, including security aides, President Hassan Rouhani and members of his cabinet.

At the meeting, described to Reuters by the three sources close to his inner circle, the 80-year-old leader, who has final say over all state matters in the country, raised his voice and expressed criticism of the handling of the unrest. He was also angered by the burning of his image and the destruction of a statue of the republic’s late founder, Ayatollah Ruhollah Khomeini.

“The Islamic Republic is in danger. Do whatever it takes to end it. You have my order,” the supreme leader told the group, one of the sources said.

Khamenei said he would hold the assembled officials responsible for the consequences of the protests if they didn’t immediately stop them. Those who attended the meeting agreed the protesters aimed to bring down the regime.

“The enemies wanted to topple the Islamic Republic and immediate reaction was needed,” one of the sources said.

The fourth official, who was briefed on the Nov. 17 meeting, added that Khamenei made clear the demonstrations required a forceful response.

“Our Imam,” said the official, referring to Khamenei, “only answers to God. He cares about people and the Revolution. He was very firm and said those rioters should be crushed.”

Khamenei, the three sources said, was especially concerned with anger in small working-class towns, whose lower-income voters have been a pillar of support for the Islamic Republic. Their votes will count in February parliamentary elections, a litmus test of the clerical rulers’ popularity since U.S. President Donald Trump exited Iran’s nuclear deal — a step that has led to an 80% collapse in Iran’s oil exports since last year.

A local official in Karaj, a working-class city near the capital, said there were orders to use whatever force was necessary to end the protests immediately. “Orders came from Tehran,” he said, speaking on condition of anonymity. “Push them back to their homes, even by shooting them.” Local government officials declined to comment.

In Mahshahr county, in the strategically important Khuzestan province in southwest Iran, Revolutionary Guards in armored vehicles and tanks sought to contain the demonstrations. State TV said security forces opened fire on “rioters” hiding in the marshes. Rights groups said they believe Mahshahr had one of the highest protest death tolls in Iran, based on what they heard from locals.

“The next day when we went there, the area was full of bodies of protesters, mainly young people. The Guards did not let us take the bodies,” the local official said, estimating that “dozens” were killed.

The U.S. State Department has said it has received videos of the Revolutionary Guards opening fire without warning on protesters in Mahshahr. And that when protesters fled to nearby marshlands, the Guards pursued them and surrounded them with machine guns mounted on trucks, spraying the protesters with bullets and killing at least 100 Iranians.

City officials in Iran's capital Tehran are planning to put locks on large waste containers in the streets to prevent garbage pickers from accessing waste. END_OF_DOCUMENT_TOKEN_TO_BE_REPLACED

The Biden Administration has confirmed to the US Congress that sanction imposed by its predecessor on Iran have drastically reduced Iran's trade with the world. END_OF_DOCUMENT_TOKEN_TO_BE_REPLACED

The UK government said on Sept 20 that Britain would "not rest" until all its dual nationals being held in Iran were returned home. END_OF_DOCUMENT_TOKEN_TO_BE_REPLACED