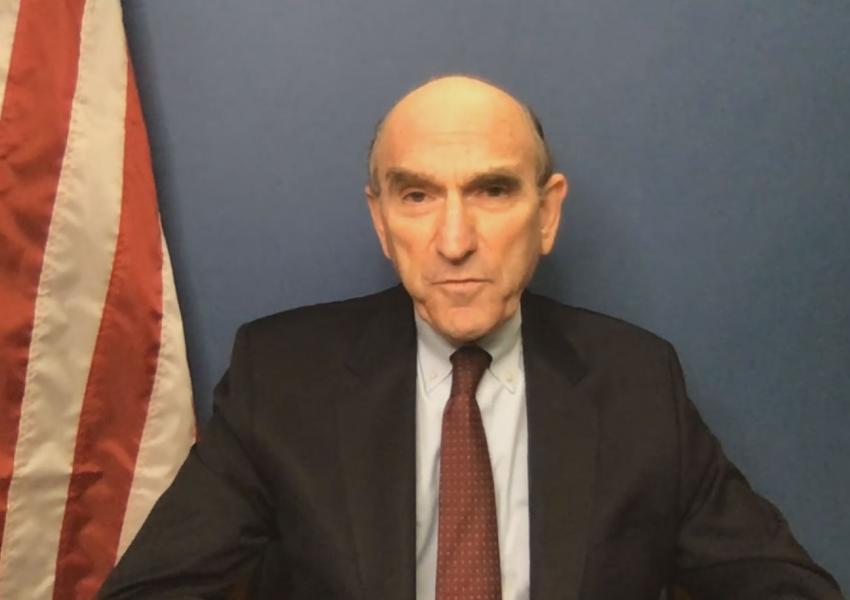 Elliot Abrams, the US Special Representative for Iran and Venezuela, in an interview with Iran International Television on December 10 suggested that the incoming Biden administration can take advantage of Trump’s ‘maximum pressure’ campaign on Iran to negotiate and achieve the best possible result. Abrams also said that President Donald Trump’s administration planned to do the same in 2021, if it had stayed in power.

Abrams predicting that the Biden administration will negotiate with Iran in the coming months explained that “the maximum pressure campaign’s objective is just not to pressure, the goal is to get a much better agreement. That is to build leverage”.

He went on to say that the Biden administration’s potential return to the original nuclear deal (JCPOA) would make Iran’s neighbors unhappy since they see the accord as a “very flawed deal” that is much too short, and does not cover “Iran’s missile program, its subversive behavior in the region, its aggressions, and its support of terrorism”.

Abrams said the flight of the US B52 bombers in the Persian Gulf region is a signal to Iran that the US is watching its activities: “We see Iranian behavior, all throughout the region, from the Mediterranean to the [Persian] Gulf, to the Bab al-Mandab. We see the aggression, and we see the subversion. The message is the United States is there in full force and capable of dealing with anything that Iran does.”

Abrams rejected the critics who claim the Trump administration’s maximum pressure campaign on Iran “has not worked” and said: “You know the maximum pressure campaign’s objective is not the pressure, the goal is to get a much better agreement. That is to build leverage. You don’t build that overnight. You start this campaign and with each passing month and each passing year, the leverage grows, and should then be used.

He said the Trump administration’s goal was to use this leverage in 2021, and that the leverage should not be discarded or used to get a small agreement, “it should be used to try to force them to change their behavior.”

When asked whether he believes the Biden administration will continue the maximum pressure, Abrams said he would not speak on the next administration’s plans, but added that there is a consensus in Washington that the nuclear deal was terrible, and the Biden administration should recognize that the pressure campaign has given US "enormous leverage", and they should then use that leverage to force Iran to change the way it is acting.

Abrams dismissed the comments made by Iranian officials claiming the US has “run out” of things to sanction, and said: “Sadly, because Iran’s conduct has not changed, and the regime continues to violate the human rights of Iranians, continues to support subversion and aggression and terrorism in the region and continues with its nuclear program, there are lots of targets for sanctions.”

City officials in Iran's capital Tehran are planning to put locks on large waste containers in the streets to prevent garbage pickers from accessing waste. END_OF_DOCUMENT_TOKEN_TO_BE_REPLACED

The Biden Administration has confirmed to the US Congress that sanction imposed by its predecessor on Iran have drastically reduced Iran's trade with the world. END_OF_DOCUMENT_TOKEN_TO_BE_REPLACED

The UK government said on Sept 20 that Britain would "not rest" until all its dual nationals being held in Iran were returned home. END_OF_DOCUMENT_TOKEN_TO_BE_REPLACED