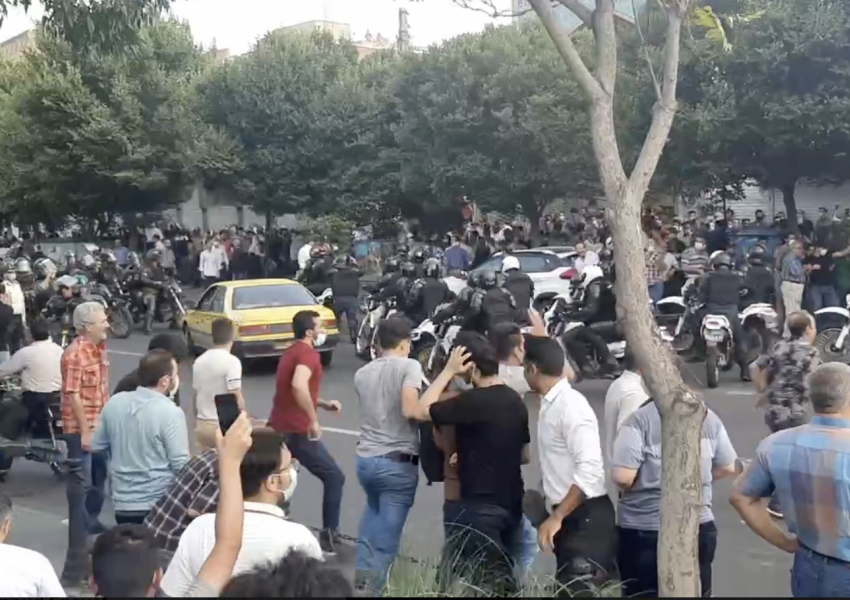 Reports from Iran’s restive Khuzestan Province and the northern city of Tabriz on Sunday say security forces are systematically arresting civil activists, may at their homes.

Human Rights Activists News Agency, HRANA, reported that the Intelligence Ministry arrested Siamak Koushi an Iranian Azeri activist and released him a few hours later. Then, the Revolutionary Guard Intelligence Organization arrested him again. He was also arrested last year during the war between Armenia and the Republic of Azerbaijan.

A large gathering took place on Saturday in Tabriz to voice support for protesters in Khuzestan who have been holding anti-government demonstrations since July 15. HRANA said that following that gathering, intelligence agents began arresting activists.

Videos received by Iran International show that special riot police transferred the detainees in blindfold to a police station. A lawyer, Mostafa Daneshjou, tweeted that blindfolding detainees violates the Law on Rights of Citizens. Images received from Tabriz also show a heavy presence of security forces and their special anti-riot vehicles in the streets.

JUST IN: @IranIntl has received a video showing blindfolded detainees in #Tabriz after yesterday's protests in #Iran. https://t.co/bu1M83TKMH

Mohammad Al-Hashem, the Friday Prayer leader of Tabriz however tried to minimize these events. He said that “separatists” tried to use some incidents for their own ends, but “the people recognizing the situation and conditions of the country, express their concerns and complaints through legal channels, speaking with officials and members of parliament.”

Al-Hashem’s reference to separatists refers to allegations that both the Khuzestan protests and the Tabriz gathering were organized by Arabs and Azeris respectively who want to divide Iran. Pro-government sources promote this theory to discourage people in other regions to join the protests.

Reports from Khuzestan have said that all ethnic and linguistic groups participate in the demonstrations and Iranian in several non-Arab regions have voiced their support for protesters in Khuzestan.

The government has been trying to minimize the backlash from the arrests. Ali Shamkhani, Secretary of Supreme National Security Council told security forces Thursday to release detainees who have not violated the law. On Sunday, the head of the hardliner Judiciary, Gholamhossein Mohseni Ejei issued a similar order to officials in Khuzestan, saying those arrested simply for participating in protests should be freed.

However, so far security forces and courts have not released any information on the identity or number of detainees. If previous protests are any indication, Islamic Republic security forces and revolutionary courts take their time to interrogate everyone without the presence of a defense attorney and treat prisoners as they wish, without any recourse for them to appeal.

Reports from Khuzestan speak of many arrests in recent days as detainees are taken to unknown locations. HRANA has so far confirmed the identity of more than 100 people mostly arrested by the Revolutionary Guard (IRGC).

Protests in Khuzestan seem set to continue every night when protesters prefer to come out to the streets, despite an overwhelming presence of security forces. Although the government can endlessly play a cat and mouse game with these protesters and gradually arrest more of them, the risk of triggering protests in other provinces is ever more present.

Iran's president Ebrahim Raisi addressed the UN General Assembly saying his country wants a resumption of nuclear talks with world powers to lead to the removal of US sanctions. END_OF_DOCUMENT_TOKEN_TO_BE_REPLACED

President Joe Biden told the UN General Assembly on September 21 that he will prevent Iran from getting nuclear weapons. END_OF_DOCUMENT_TOKEN_TO_BE_REPLACED

India has seized nearly three tons or $2.72 billion worth of Afghan heorin shipped from Iran. END_OF_DOCUMENT_TOKEN_TO_BE_REPLACED

Iran's foreign ministry spokesman has said that nuclear talks with world powers will start in a few weeks but has not given a firm date. END_OF_DOCUMENT_TOKEN_TO_BE_REPLACED