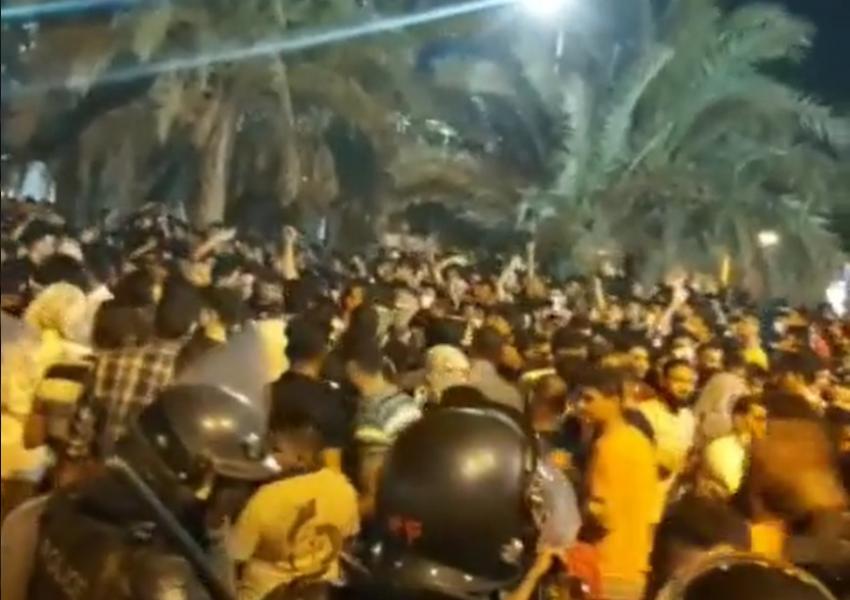 Tuesday night protesters took to the street in Baharestan township near Esfahan where they ripped and burned a banner of Supreme Leader Ali Khamenei in the town square. In Kordkuy in Golestan province, and Eyvan-e Gharb in Ilam province they blocked roads into the towns. All were responding to power cuts.

In Baharestan, which has a population of nearly 50,000, protesters gathered in the town square and chanted slogans in solidarity with the people of Khuzestan whose protests over water shortages two weeks ago turned into protests against the government.

Protesters in the township chanted "We Don't Want the Islamic Republic," "Death to Khamenei," and "We Don't Want to Fight!" Some chanted "May Your Soul Rest In Peace Reza Shah,” a reference to the monarch who launched Iran’s modernization in the 20th century and was forced by the British to abdicate in 1941.

Protesters in Esfahan, which like Khuzestan has serious water issues, held a protest rally Monday by the city's dried up river, Zayandeh Roud. There was a rally July 22 and chanting in Shahin Shahr, a satellite city of Esfahan with a population of about 180,000, in support of Khuzestan protesters.

In Kordkuy, a town of nearly 30,000 in the eastern Caspian area of northern Iran, videos posted on social media appear to show a street rally and young men blocking the road to the town in protest to power cuts. Similarly, in Eyvan-e Gharb, also a small town of nearly 50,000 in the western border area, cars blocked the road to the town.  People in cars honked their horns.

Ghasem Saedi, a hardline lawmaker from Khuzestan province, said that the families of those who had died in Khuzestan would receive compensation. "The young men who were killed came to the street for peaceful protests but they were targeted by unknown people,” he said. “The [Supreme] National Security Council is planning to make compensation because they are saddened about the killing of the people.”

Although security forces have used live ammunition to confront and disperse protesters, the official government line is that people have been killed by “unknown” elements. Iranian officials made similar claims in the November 2019 protests when up to 1,500 protesters were killed, mostly by gunfire.

Hundreds are reported to have been arrested in Khuzestan, Tabriz and Kermanshah and there is little news about their whereabouts or health condition. Officials have said some protesters have been released but there is no confirmation by independent sources.

The Iranian HRANA (Human Rights Activists News Agency) said Tuesday it could confirm five deaths of ten it named as “said” to have occurred, allegedly resulting from action police and security forces, in Khuzestan cities, since protests began July 15. Officials have announced the death of a member of security forces in the protests.

Authorities have also switched broadband internet − which only a small minority of Iranians use – in Khuzestan to a tightly controlled intranet. In Tehran and other cities authorities have shut down mobile have internet temporarily in recent days when and where a protest breaks out.

Iran's president Ebrahim Raisi addressed the UN General Assembly saying his country wants a resumption of nuclear talks with world powers to lead to the removal of US sanctions. END_OF_DOCUMENT_TOKEN_TO_BE_REPLACED

President Joe Biden told the UN General Assembly on September 21 that he will prevent Iran from getting nuclear weapons. END_OF_DOCUMENT_TOKEN_TO_BE_REPLACED

India has seized nearly three tons or $2.72 billion worth of Afghan heorin shipped from Iran. END_OF_DOCUMENT_TOKEN_TO_BE_REPLACED

Iran's foreign ministry spokesman has said that nuclear talks with world powers will start in a few weeks but has not given a firm date. END_OF_DOCUMENT_TOKEN_TO_BE_REPLACED