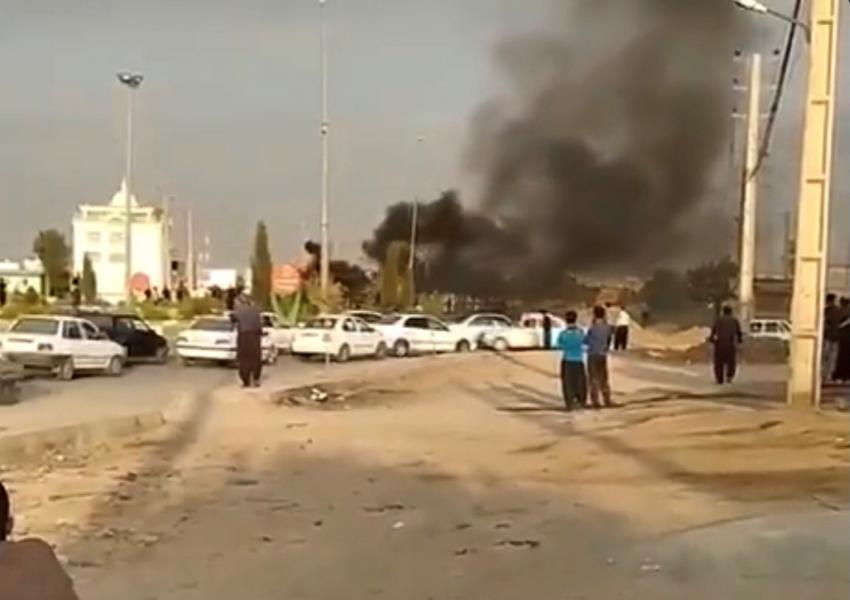 Water and anti-government protests continued in the cities of Esfahan, Kermanshah, Karaj and Ahvaz Monday evening. There were protests in Tehran Monday morning and in Tabriz, northwest Iran, Saturday.

Social media users Monday reported serious mobile internet disruptions in various areas including Esfahan, Tabriz and cities in Khuzestan. These disruptions appear to have restricted the flow on social media of videos from protesters.

A video from Kermanshah, capital of Kermanshah province in western Iran Monday evening, showed tires burning in the middle of a road at an entrance to the city. Later, social media users claimed there had been clashes between protesters, tear gas and gunshots. One video showed heavy presence of security forces in Kermanshah Sunday evening after dark.

Karaj, the capital of Alborz province west of Tehran, was also the scene of a protest Monday evening in support of protests in Khuzestan. Videos posted on social media show protesters chanting "Down with the Dictator", "Iranians Will Fight and Die But Won't Surrender to Humiliation".

Social media users Monday evening also reported a mobile internet blackout and clashes between protesters and security forces in the Shelang-Abad neighborhood of Ahvaz, Khuzestan province. They also reported the dispatch of “anti-riot special forces” to Ahvaz and arrests.

Protesters in Karaj, west of Tehran chanting "Death to the dictator"

Iran faces its worst drought in decades, along with other regional countries. Unicef has warned that Lebanon’s public water supply could end within weeks, while in Iraq around 70 percent of agricultural land is threatened with desertification.

Earlier Monday residents of Tehran protested near the Iranian parliament chanting slogans against clerics, the Islamic Republic and Supreme Leader Ali Khamenei. The protest began after power failed at a multi-story computer and mobile phone shopping arcade – with disgruntled shoppers marching towards the parliament chanting “Khamenei shame on you, leave Iran alone,” “Death to the dictator,” and “No Gaza, No Lebanon, my life for Iran.”

The governor of Tehran, Ardashir Mohseni-Bandpey, attributed the protest to a cut in supply to the arcade due to high usage and a failure to pay the bill. He said the police were investigating the instigators of the protest.

After the protests over water broke out in Khuzestan July 15, a large crowd gathered in Tabriz July 24 in support, followed by reports of arrests.

Amnesty International reported July 23 that in “mostly peaceful” protests in Khuzestan, security forces had killed “at least eight protestors and bystanders, including a teenage boy, in seven different cites” while a police officer had been shot dead in the port city of Mahshahr. Since then, the deaths of 12 people have been reported on social media with their names and photos. The Iranian HRANA human rights group has confirmed ten deaths.

Iran's president Ebrahim Raisi addressed the UN General Assembly saying his country wants a resumption of nuclear talks with world powers to lead to the removal of US sanctions. END_OF_DOCUMENT_TOKEN_TO_BE_REPLACED

President Joe Biden told the UN General Assembly on September 21 that he will prevent Iran from getting nuclear weapons. END_OF_DOCUMENT_TOKEN_TO_BE_REPLACED

India has seized nearly three tons or $2.72 billion worth of Afghan heorin shipped from Iran. END_OF_DOCUMENT_TOKEN_TO_BE_REPLACED

Iran's foreign ministry spokesman has said that nuclear talks with world powers will start in a few weeks but has not given a firm date. END_OF_DOCUMENT_TOKEN_TO_BE_REPLACED