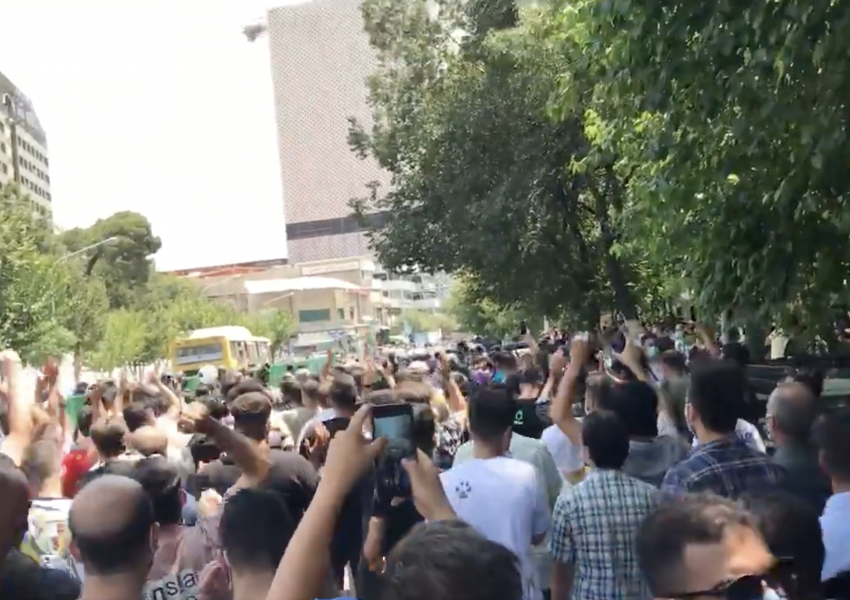 After two weeks of protests in Iran’s Khuzestan province, a sudden large demonstration erupted in the Iranian capital Tehran Monday morning, with protesters chanting that clerics “should get lost”.

Videos and reports on social media show that hundreds of people in downtown Tehran, at Baharestan square not too far from the parliament gathered chanting slogans against the Islamic Republic. “Khamenei shame on you, leave Iran alone,” “Death to the dictator”, and “No Gaza, No Lebanon, my life for Iran”, were slogans reminiscent of earlier protests in 2017, 2018 and 2019.

Protesters also chanted slogans in praise of Reza Shah, the founder of the Pahlavi Dynasty that modernized Iran in the first half of the 20th century. The Islamic Republic is a sworn enemy of Iran's monarchy that ended in 1979 by the Islamic Revolution.

Hamid-Reza Goodarzi, deputy chief of Tehran’s security confirmed the news of the protest but said that the reason was a power cut. But on July 20, another spontaneous protest took place at one Tehran’s busy metro stations, with crowds waiting on the platform shouting slogans against the regime and Khamenei.

Protesters shouting, “No Gaza, No Lebanon, my life for Iran”

A protest march also took place in Karaj, a large city west of Tehran in support of protests in Khuzestan and the Monday demnstration in Tehran.

Unrest began in the oil-producing Khuzestan on July 15 triggered by month of water shortage and years of high unemployment and lack of government services. However, protests soon turned to anti-regime demonstrations and security forces began shooting at protesters and conducting mass arrests.

So far, the deaths of ten people have been confirmed and hundreds arrested, while thousands of anti-riot police and Revolutionary Guard troops have surrounded restive areas in major cities. Internet connection has been cutoff in the province, both to prevent coordination among protesters and to block videos from reaching the outside world.

While dramatic events have been taking place in the southwestern Iran, the rest of the country remained largely quiet, with a few sudden protests erupting in support of protesters in Khuzestan. One such important protest took place on Saturday in the northwestern city of Tabriz where a large crowd gathered to support protesters in Khuzestan. Arrests followed in the Azeri-populated city with tens of activists and protesters detained by intelligence agents.

A video by Fars news agency shows a row of anti-riot police motorcycles blocking the path of demstrtors in Tehran and it is not clear how and when the protest ended.

The government always faced the risk of Khuzestan’s protests to spill over into other regions and ignite nationwide unrest similar to November 2019, when security forces killed at least 1,500 people.

Iran's president Ebrahim Raisi addressed the UN General Assembly saying his country wants a resumption of nuclear talks with world powers to lead to the removal of US sanctions. END_OF_DOCUMENT_TOKEN_TO_BE_REPLACED

President Joe Biden told the UN General Assembly on September 21 that he will prevent Iran from getting nuclear weapons. END_OF_DOCUMENT_TOKEN_TO_BE_REPLACED

India has seized nearly three tons or $2.72 billion worth of Afghan heorin shipped from Iran. END_OF_DOCUMENT_TOKEN_TO_BE_REPLACED

Iran's foreign ministry spokesman has said that nuclear talks with world powers will start in a few weeks but has not given a firm date. END_OF_DOCUMENT_TOKEN_TO_BE_REPLACED