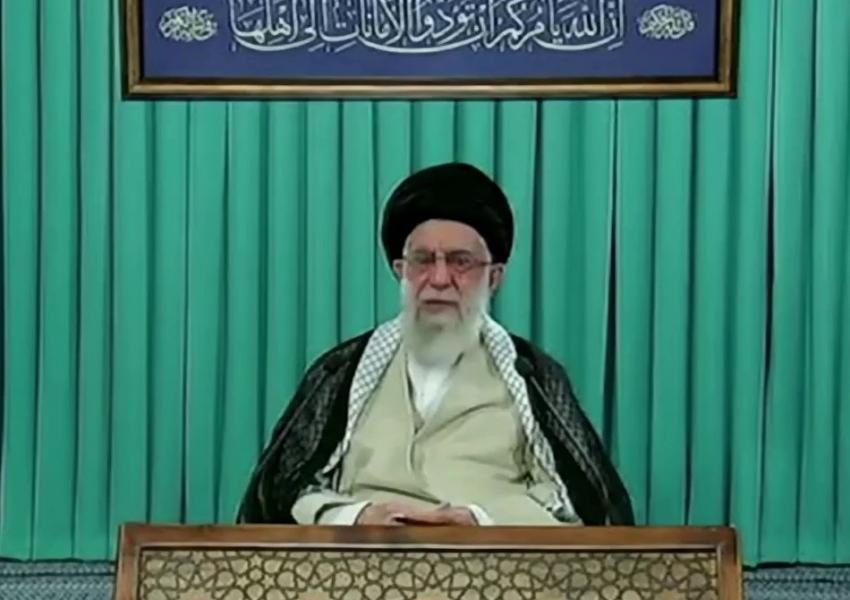 Khamenei Appeals To Voters To Counter Calls For Election Boycott

Islamic Republic's Supreme Leader Ali Khamenei has urged the nation to go to the polls in the presidential election on Friday, June 18, and warned that a low turnout in would bring about an escalation in economic pressures on Iran by “the enemies”.

Khamenei who seemed to be aware and even frightened by the nationwide calls for boycotting the election, in his televised speech blamed foreign based media and the "enemies" for the disinterest in the election. For the Islamic Republic leaders “enemies” comprise a host of actors, including the United States, Israel, Iranian critics and opponents, media not controlled by Tehran, and even international rights organizations. One particular target for Khamenei was Persian speaking media abroad broadcasting into Iran, including Iran International, which reflect the news about citizens boycotting the election.

Almost half the 30-minute speech was devoted to the conspiracy theory of enemies trying to derail the election, while one of the reasons for lack of interest is the fact that the Guardian Council, working under his supervision, barred key candidates and turned the vote into a forgone conclusion. Ebrahim Raeesi, the conservative chief of the Judiciary is Khamenei’s intended winner and all techniques have so far been employed to pave the way for his victory.

Sitting with his back to a sign with an Arabic inscription that said: "God commands you to render trusts to their owners,"  Khamenei said that people's presence in the election will show to the enemies that Iranians back the regime, while a low turnout will lead to increased pressures by the enemies.

Her added that an election with a high turnout will empower the next president to do big works. His main concern, however, was about unemployment.

Khamenei continued that Iran is a country with many resources and a hardworking president can use these resources effectively to solve problems in the interest of the nation. However, at least the last three presidents of Iran have said, without naming him, that Khamenei's interventions in the affairs of the state make it impossible for them to solve the country's problems.

Showing once again that he was aware of the nationwide calls to boycott the election, Khamenei agreed that that those who have complaints about the way the country is run had genuine demands but added that "not voting will not solve any problem."  However, he did not say what voting can do for them. Opinion surveys show that an unusually high number of voters have concluded that voting in a system which offers limited choice and puts in place multiple barriers to change does not make sense.

Many complain that in the latest presidential election in Iran they voted for the relatively moderate Hassan Rouhani but throughout the past four years, Rouhani's rivals have been obstructing whatever he wanted to do and at the same time implemented their own ideas such as continuing a foreign policy that prevents Iran from economic growth.

Elsewhere in the speech, Khamenei insisted that elections in Iran have always been healthy. He claimed this while at least the disputed 2009 presidential election led to massive protests ending in tens of murders by security forces and hundreds of arrests.

Khamenei who until recently did not support the idea of a high turnout in the coming election appealed to young Iranians and particularly to first time voters to go to the polls to disappoint “the enemies.”

In the days before the elections videos coming out of Iran show young citizens openly saying despite the danger of being arrested that they will not take part in the election as they believe their vote will not lead to any meaningful change in Iran.

Iran's president Ebrahim Raisi addressed the UN General Assembly saying his country wants a resumption of nuclear talks with world powers to lead to the removal of US sanctions. END_OF_DOCUMENT_TOKEN_TO_BE_REPLACED

President Joe Biden told the UN General Assembly on September 21 that he will prevent Iran from getting nuclear weapons. END_OF_DOCUMENT_TOKEN_TO_BE_REPLACED

India has seized nearly three tons or $2.72 billion worth of Afghan heorin shipped from Iran. END_OF_DOCUMENT_TOKEN_TO_BE_REPLACED

Iran's foreign ministry spokesman has said that nuclear talks with world powers will start in a few weeks but has not given a firm date. END_OF_DOCUMENT_TOKEN_TO_BE_REPLACED