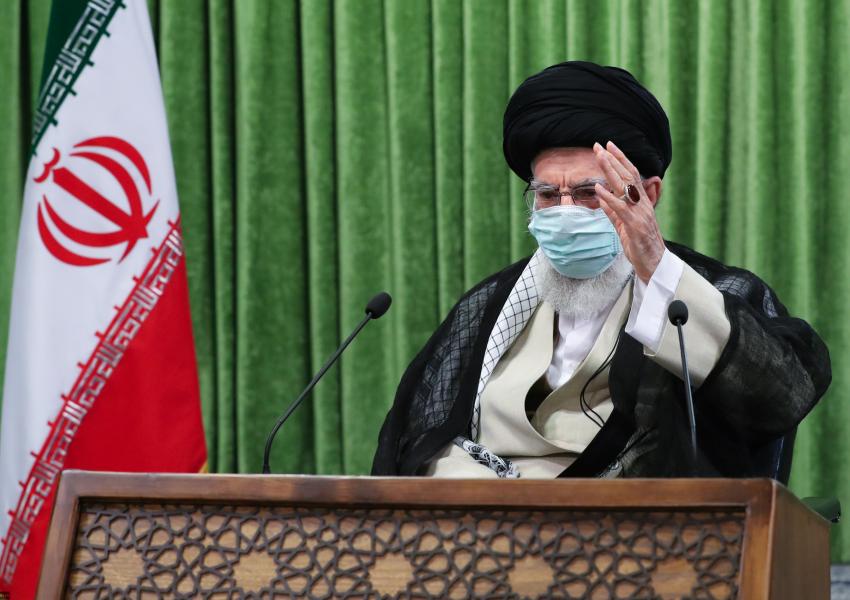 The Supreme Leader of Iran's Islamic government Ali Khamenei Thursday defended the hardliner Guardian Council's decision to disqualify three candidates believed to have been important for giving voters a wider choice in the June presidential elections.

Khamenei’s support for the decision came despite a letter sent by President Hassan Rouhani asking him to intervene to change the Guardian Council’s verdict to ensure a larger turnout. Other political figures and many Iranians have also criticized or cendemned the restricted election.

The elimination of key candidates boosted predictions of a particularly low turnout in June, but Khamenei called on Iranians to take part in the election and not listen to those who call for boycotting the vote.

"Those who suggest taking part in the election will make no difference, do not care for the nations' interests," he said. Meanwhile, he charged that "the enemies" want to dissuade the people from going to the polls.

Larijani and Jahangiri, however, have said that they accept the council's verdict. Nonetheless, Ali Larijani said on Thursday that the evidence used against him during the vetting were "fabricated." Ahmadinejad has protested the decision and has said he will boycott the vote.

The Guardian Council, a body consisting of 6 high-ranking Shiite clerics and 6 lawyers, is a constitutional watchdog that vets parliamentary and presidential election candidates and makes sure that legislation made by the parliament (Majles) are consistent with the Constitutional Law and the rules of Islamic jurisprudence (Shari’ah). The body operates under the supervision of Supreme Leader Ali Khamenei.

The current round of vetting of the candidates has particularly annoyed Iran's reform camp, which has said it no longer has any candidates in the June 18 election. Former reformist President Mohammad Khatami has questioned the nature of the regime as a "republic" following the disqualification of reformist candidates.

Khamenei said he understands the protests against the Guardian Council's verdict although these protests have “various reasons”. Nonetheless, he added that some of those who object to the council's verdict are the enemies of the Council and they want to take revenge. This was a veiled reference to Ahndinejad who was also disqualified in 2017.

Meanwhile, Khamenei said he was not concerned about a possible low turnout and that "God willing, there will be a high turnout," adding that the voters will not vote for individual candidates, and instead, they would be looking to see who has better plans that would solve the nation's problems.

He said the country has urgent economic problems, adding that "The people do not care about the candidates' views about social media or foreign policy. The people have other problems such as unemployment and hardship among low-income parts of the society, and the wrong policies that hinder national production."

The candidates, he said, should be able to convince the voters that they can solve these problems.

He called on the candidates not to turn their campaign into a struggle for power. He also said that the candidates should avoid giving unrealistic promises.

City officials in Iran's capital Tehran are planning to put locks on large waste containers in the streets to prevent garbage pickers from accessing waste. END_OF_DOCUMENT_TOKEN_TO_BE_REPLACED

The Biden Administration has confirmed to the US Congress that sanction imposed by its predecessor on Iran have drastically reduced Iran's trade with the world. END_OF_DOCUMENT_TOKEN_TO_BE_REPLACED

The UK government said on Sept 20 that Britain would "not rest" until all its dual nationals being held in Iran were returned home. END_OF_DOCUMENT_TOKEN_TO_BE_REPLACED