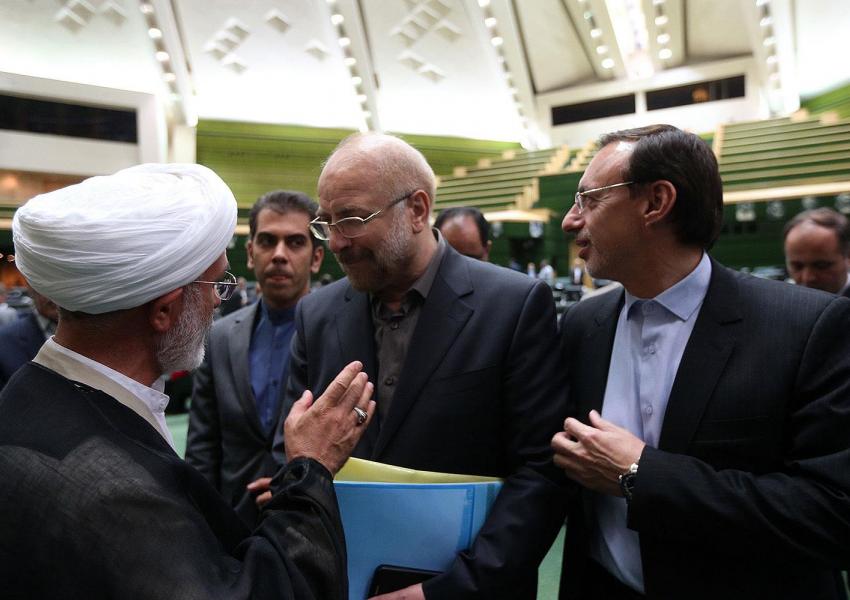 An unusually heavy sentence handed out to the former Tehran Deputy Mayor and close aide to Parliament Speaker Mohammad-Bagher Ghalibaf (Qalibaf) on charges of corruption after a trial that lasted more than three years can cast a heavy shadow on the Ghalibaf's own political future. Isa Sharifi has been sentenced to 20 years in prison and a fine of 4,800 billion rials (approximately $23 million).

Sharifi, a former senior Revolutionary Guards (IRGC) officer like his former boss, served as deputy mayor of Tehran under Ghalibaf for 12 years (2005-2017). He was arrested in September 2017 and tried behind closed doors by an Armed Forces Judicial Organization court. At some point judiciary officials even accused him of espionage but his sentencing on Saturday is only related to corruption.

Since the beginning of the revelations about corruption in the Municipality, the case which was dubbed “astronomical property [fraud] scandal” by the Iranian media has haunted Ghalibaf who assumed the position of the Speaker on May 28, 2020. In April 2017 during Ghlaibaf’s presidential campaign two other candidates, President Hassan Rouhani and First Vice-President Es'haq Jahangiri, attacked Ghalibaf for corruption at Tehran municipality.

Huge irregularities at the mayor’s office were first revealed to the public by Shahrvand newspaper on September 15, 2016. Two days later Yashar Soltani, the editor of Memari News, published a classified letter from the State Audit Organization that showed over a million square meters of public land and apartments worth up to $500m had been sold or relinquished to close political associates and allies at cut-rate prices and under favorable arrangements.

In many cases, the State Audit Organization corroborated that sale prices had been unduly low. The Islamic Revolution Guard Corps (IRGC) was also implicated in the case as recipient of some of the prime real estate.

It took the authorities a year to arrest Sharifi although the whistle-blower journalist was arrested immediately after publishing the letter and the news website that he edited was blocked. Soltani was eventually sentenced to five years in prison in February 2018 for "collecting and publishing classified documents" and "publishing false information to disturb the public's peace of mind", and "slander".

Ghalibaf has also been accused of donating over 600 billion rials and 80,000 square meters of land in 2014 to his wife's charity but has never been prosecuted. In December, the current reformist mayor of Tehran Pirouz Hanachi said the municipality had repossessed more than 6,000 square meters (66,000 sq feet) of the properties that had been illegally transferred by Parliament Speaker Mohammad Bagher Ghalibaf (Qalibaf) to his wife and allies when mayor of the capital.

Ghalibaf – who previously stood unsuccessfully against both Rouhani and Mahmoud Ahmadinejad in 2005 – may be once again a candidate in June’s presidential election. He has consistently denied allegations of misconduct and fraud.

City officials in Iran's capital Tehran are planning to put locks on large waste containers in the streets to prevent garbage pickers from accessing waste. END_OF_DOCUMENT_TOKEN_TO_BE_REPLACED

The Biden Administration has confirmed to the US Congress that sanction imposed by its predecessor on Iran have drastically reduced Iran's trade with the world. END_OF_DOCUMENT_TOKEN_TO_BE_REPLACED

The UK government said on Sept 20 that Britain would "not rest" until all its dual nationals being held in Iran were returned home. END_OF_DOCUMENT_TOKEN_TO_BE_REPLACED