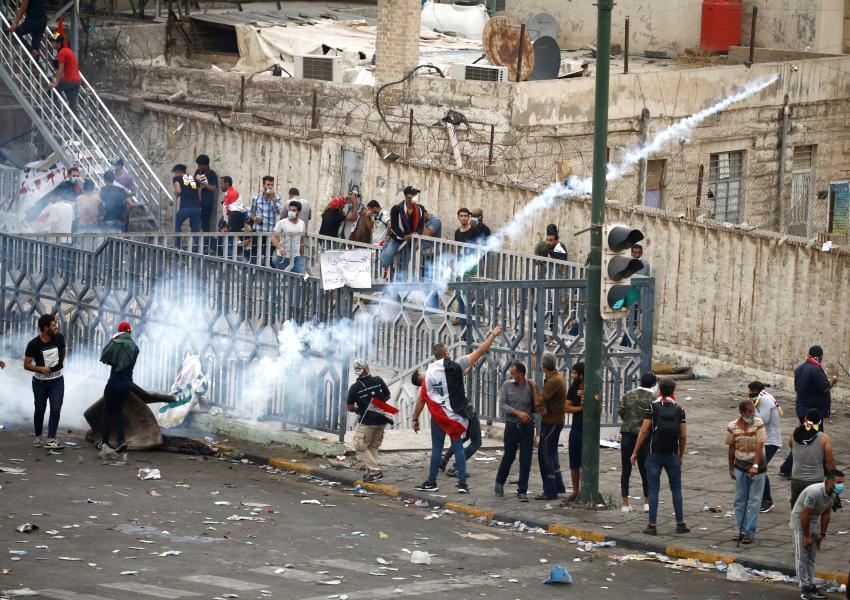 According to reports from Iraqi police and hospitals, at least three protesters were killed on Friday by Iran-backed Shia militia in Nasiriyah city in the south of Iraq. The shootings occurred after a group of protesters tried to enter the offices of Asa'ib Ahl al-Haq Shia militia group. Over 40 people were injured during the altercations.

Meanwhile, some protesters set fire to the local government’s building. Police forces also announced that at least 18 individuals were injured during the attack on the offices of Shia militia in Amarah city.

Yesterday, it was reported that two people were killed in Baghdad protests. According to a member of Iraq’s Human Rights Commission, the two were killed by tear gas hitting them in the head and face.

Ayatollah Sistani, the most prominent Ayatollah of Iraq released a statement emphasizing that peaceful protests are the citizen’s rights, and asked the protesters and the security forces to keep the protests peaceful. He added: “True reform and change in the country can only come about through peaceful measures.”

He also asked the security forces not to allow the destruction of public and private property.

Prime Minister of Iraq, Adil Abdul-Mahdi, who’s been in power for a year, also asked the protesters to choose peaceful measures.

The new round of protests started in several areas in Baghdad, including the Tahrir Square and the Green Zone. There were also protests in several other cities.

The protesters object to the economic corruption, unemployment, the political system, and Iran’s influence and the Iran-backed militia in Iraq.

In the first round of protests in Iraq, 157 people were killed by the security forces and militia.

City officials in Iran's capital Tehran are planning to put locks on large waste containers in the streets to prevent garbage pickers from accessing waste. END_OF_DOCUMENT_TOKEN_TO_BE_REPLACED

The Biden Administration has confirmed to the US Congress that sanction imposed by its predecessor on Iran have drastically reduced Iran's trade with the world. END_OF_DOCUMENT_TOKEN_TO_BE_REPLACED

The UK government said on Sept 20 that Britain would "not rest" until all its dual nationals being held in Iran were returned home. END_OF_DOCUMENT_TOKEN_TO_BE_REPLACED