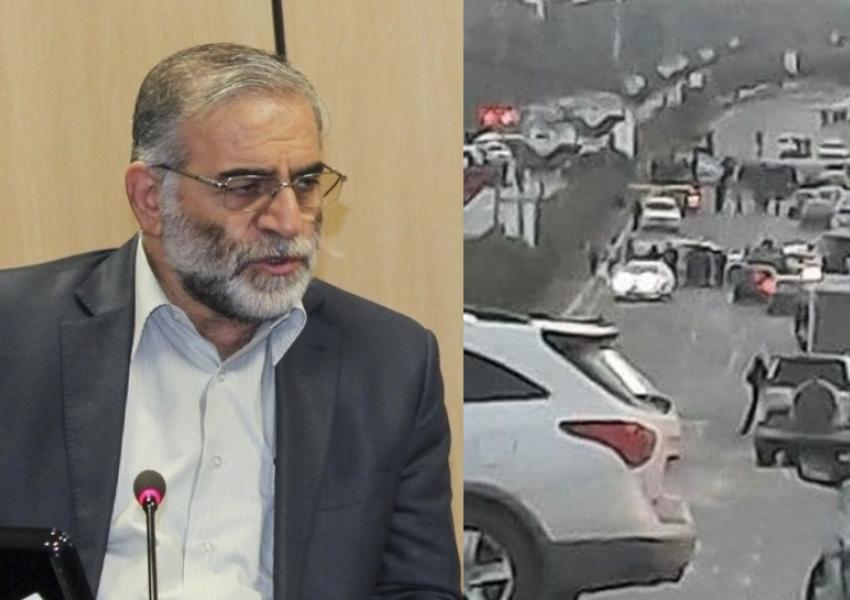 While reactions to the assassination of Mohsen Fakhrizadeh, a high-ranking nuclear official and member of Iran’s Islamic Revolutionary Guard Corps (IRGC) continue, two news agencies with ties to IRGC released new details about the assassination and reported that his vehicle and his two escort vehicles were first stopped by a barrage of bullets, then a van filled with lumber exploded next to his car, and a group of assailants from an unknown location opened fire at him and his bodyguards.

The Islamic Republic has not released any official report about the details of the assassination of Mohsen Fakhrizadeh. In an interview on Iranian state-TV, Minister of Defense Amir Hatami went over some parts of the incident and said Fakhrizadehamong other was the chairman of New Defense Technology Organization and the director of Iran’s nuclear defense among other positions and as such he had close and direct relations with nuclear-related scientists and activities.

IRGC’s Fars News reported that on Friday around 2:00 pm, three vehicles carrying Fakhrizadeh and bodyguards entered the town of Ab-Sard in Damavand county, and they were stopped by a barrage of bullets near a big garden.

According to Fars, after the three vehicles stopped, a Nissan van carrying lumber exploded next to them, the explosion blasted wood chips and car parts up to 500 meters away, and cut off the town’s electricity. One can assume that the van was booby-trapped and parked.

Fars goes on to say the assailants ambushed and targeted the vehicles from unknown locations, and one bodyguard put his vehicle in between the assailants and Fakhrizadeh in order to protect him, but it wasn’t enough.

The report continues: After the firing stopped the terrorists escaped, and there is currently a search in Damavand county to find their hideout. Immediately after the attack, Fakhrizadeh was transported to a clinic in Ab-Sard and 30 minutes later he was transferred to a hospital by helicopter. He died in the hospital due to severe injuries.

Defense Minister Amir Hatami pointed finger at Israel as the director of this operation: “You can clearly see Israel, its supporter the US, and domestic traitors involved in this assassination.”

Fars News had previously claimed “three or four others were killed who are said to be from the assailants”, but the new report clarifies that one of the bodyguards of Fakhrizadeh was killed on the scene, but the Defense Minister said only two of his bodyguards were injured.

The Commander in chief of IRGC, Hossein Salami released a statement calling Fakhrizadeh a “prominent scientist in strategic and defense industries” and promised severe revenge and punishment to the orchestrators and facilitators, and executors of this assassination.

Hossein Alaei, a former senior IRGC commander said in an article this the seventh assassination of nuclear scientists in Iran, and emphasized that the assassination of Fakhrizadeh shows that Israel’s espionage and operations in Iran are very active.

The Iranian Foreign Minister Mohammad Javad Zarif said there were “serious indications” that Israel was involved in Friday’s killing of Mohsen Fakhrizadeh, a nuclear scientist and member of Iran’s Revolutionary Guard (IRGC).

The Islamic Republic of Iran's ambassador to the UN, Majid Takht-Ravanchi described the assassination of Fakhrizadeh as "state terrorism" and "blatant violation of international law" aimed at destroying the region.

City officials in Iran's capital Tehran are planning to put locks on large waste containers in the streets to prevent garbage pickers from accessing waste. END_OF_DOCUMENT_TOKEN_TO_BE_REPLACED

The Biden Administration has confirmed to the US Congress that sanction imposed by its predecessor on Iran have drastically reduced Iran's trade with the world. END_OF_DOCUMENT_TOKEN_TO_BE_REPLACED

The UK government said on Sept 20 that Britain would "not rest" until all its dual nationals being held in Iran were returned home. END_OF_DOCUMENT_TOKEN_TO_BE_REPLACED