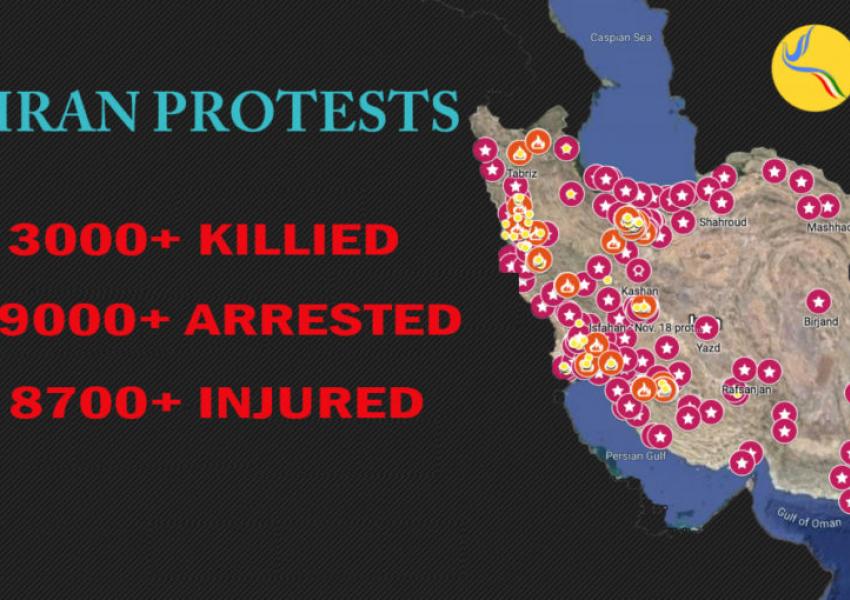 A new report by Human Rights in Iran claims that in the "bloody November" of 2019 at least 3,000 protesters were killed by the Islamic Republic security forces from November 15 to 17, and nearly 20,000 arrested.

The Human Rights in Iran website affiliated with the Mehr Center, in an earlier report published on December 2, 2019, had stated that the number of people killed in the protests was more than 900 and the number of detainees was aroung 13,000.

According to the new report, further investigations in the months following the protests show that at least 3,000 people were killed and 19,000 detained as a result of the crackdown on nationwide protests of 2019.

Previous estimates by other rights monitoring groups and Reuters put the death toll between a few hundred to 1,500, but there have been no new studies in recent months.

When asked for sources, the website refused to name any saying it would endanger “those who bravely put their lives on the line in Iran to acquire this information.” It maintained that Human Rights in Iran has used many confidential sources and most of the data has been gathered from hospitals, morgues, and Iran's medical system. No further information was available to Iran International to assess the accuracy of the numbers mentioned in the report, which are much higher than previous estimates by other sources.

According to Reuters, Iran's Supreme Leader Ali Khamenei, in a meeting with government officials on Sunday, November 17, 2019, ordered an end to the protests, saying: “The Islamic Republic is in danger, do whatever is necessary to end these protests. This is my order.” According to the report, Khamenei, who was outraged by protesters tearing down his posters in the streets and the destruction of a statue of Ruhollah Khomeini, told officials in a meeting he would hold them responsible if the protests did not stop immediately.

The regime demanded payment from the families to return the dead bodies of their loved ones and a pledge not to hold memorial ceremonies for them.

The November 2019 protests were the most widespread against the government of the Islamic Republic since its establishment in 1979, and the internet outage gave security officials the opportunity to commit mass killings amid a news blackout for about 10 days. The crackdown on protesters also drew widespread international criticism and reactions.

Link to the full report.

City officials in Iran's capital Tehran are planning to put locks on large waste containers in the streets to prevent garbage pickers from accessing waste. END_OF_DOCUMENT_TOKEN_TO_BE_REPLACED

The Biden Administration has confirmed to the US Congress that sanction imposed by its predecessor on Iran have drastically reduced Iran's trade with the world. END_OF_DOCUMENT_TOKEN_TO_BE_REPLACED

The UK government said on Sept 20 that Britain would "not rest" until all its dual nationals being held in Iran were returned home. END_OF_DOCUMENT_TOKEN_TO_BE_REPLACED