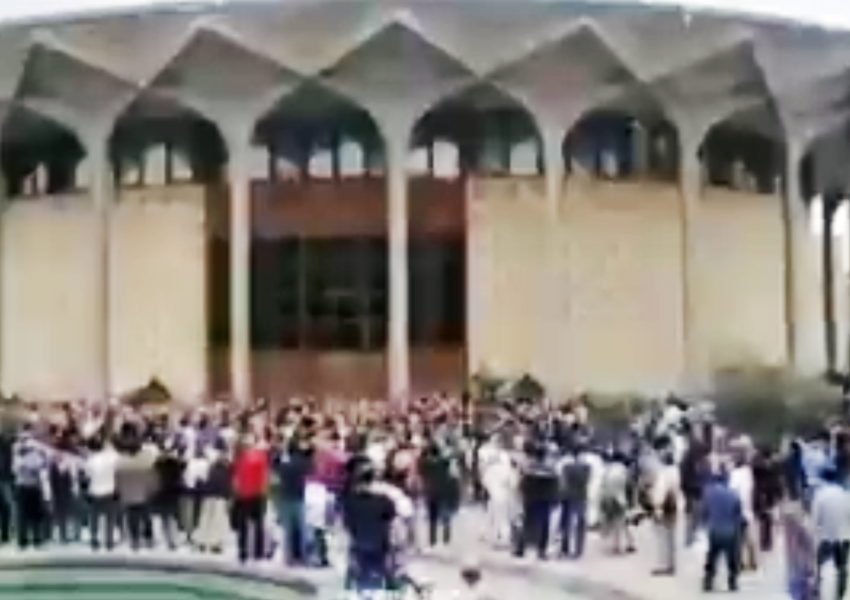 A large of group of protesters gathered outside Tehran’s City Theater Saturday afternoon and began chanting slogans in support of protesters in Khuzestan, the oil-rich southwestern region where demonstrations triggered by lack of water, broke out on July 15.

Based on reports and videos on social media, security forces began firing tear gas and guns in the air to disperse the peaceful crowd in Tehran and then started arresting protesters, who were shouting “Death to Islamic Republic” and chanting against Supreme Leader Ali Khamenei.

It is not clear yet if the incident has ended or if sporadic protests have continued after nightfall. Also, there is still no news about the number of people detained.

This is not the first protest in Tehran since demonstrations started in Khuzestan, but BBC Persian reported that people gathered after a group of cultural figures Saturday called for a gathering outside the theater in downtown Tehran. Friday night when people came out into the streets to celebrate the victory of a football team, security forces tried to disperse them, which turned the celebration into political protests.

Today @IranIntl received a video from Tehran where a protest was held with protesters chanting "the country has no water." This comes as protests have occurred in Khuzestan Province over water shortages in #Iran. https://t.co/IRjVl4dE7V

Increasingly, slogans have focused on Supreme Leader Khamenei and the clerical ruling class. “Death to the dictator” and “Clerics should get lost” have become common chants. Iran experienced nationwide protests in 2017, 2018 and in November 2019, resulting in the deaths of hundreds of people mostly when security forces opened fire at protesters.

Saturday’s protesters also chanted in remembrance of young people killed in 2019, saying families are without their children and Khuzestan is without water.

There have been also protests in other parts of Iran, including a sudden demonstration in Tabriz last Saturday, July 24, in support of the people in Khuzestan. There have been other protests in Esfahan, Karaj, Lorestan province and elsewhere.

In recent days there has been little news from Khuzestan as systematic arrests of activists have been taking place. Authorities have also restricted internet access, which prevent citizens from sharing news and videos. Government diversion of water from the province in the last decade and a bad drought this year have led to urban and rural residents thirsty, agriculture destroyed and livestock dying

Iran's president Ebrahim Raisi addressed the UN General Assembly saying his country wants a resumption of nuclear talks with world powers to lead to the removal of US sanctions. END_OF_DOCUMENT_TOKEN_TO_BE_REPLACED

President Joe Biden told the UN General Assembly on September 21 that he will prevent Iran from getting nuclear weapons. END_OF_DOCUMENT_TOKEN_TO_BE_REPLACED

India has seized nearly three tons or $2.72 billion worth of Afghan heorin shipped from Iran. END_OF_DOCUMENT_TOKEN_TO_BE_REPLACED

Iran's foreign ministry spokesman has said that nuclear talks with world powers will start in a few weeks but has not given a firm date. END_OF_DOCUMENT_TOKEN_TO_BE_REPLACED

Shahin Naseri, a fellow prisoner who gave evidence in the murder trial of Navid Afkari that the wrestler had been beaten to secure a confession, is reported dead by other inmates.
56 min 35 sec ago