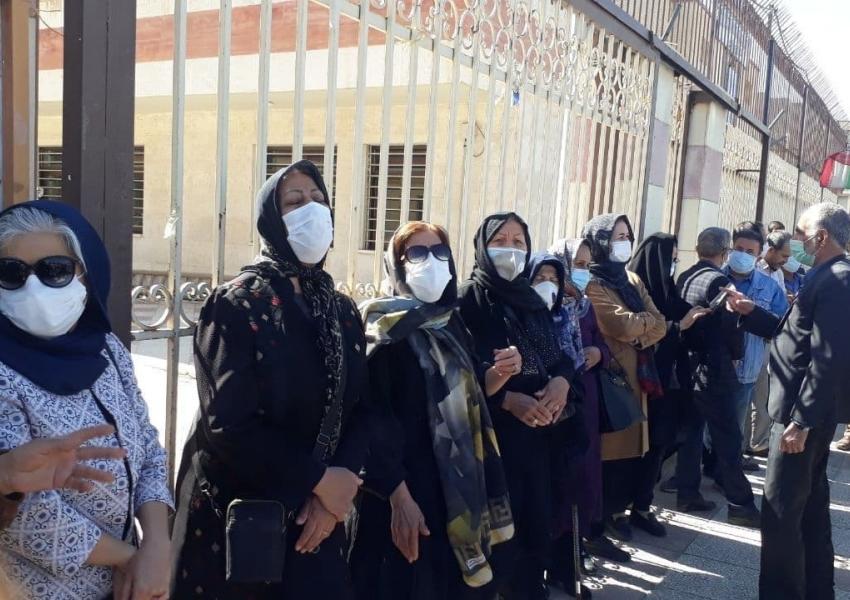 Retirees Protest In Many Iranian Cities Amid High Inflation And Poverty

Groups of retirees in Iran gathered Sunday in various cities to protest low pensions and call for a boycott of presidential elections in June. Social-media videos and pictures showed demonstrators in Tehran, Karaj, Arak, Ardebil, Esfahan, Shiraz, Tabriz and other cities.

Retirees, who have protested every Sunday for two months, chanted slogans like “We will not vote – We have heard enough lies.” They condemned the parliament and government for deceiving people.

Iran Labour News Agency reported that retirees were disputing their monthly 40 million rial pensions, equivalent to less than $200 with the rial depleted after three years of stringent United States sanctions. The pensioners demanded at least 100,000 million rials, which labor groups say is the minimum needed by a family of 3.7 people.

While Iran’s currency has fallen eightfold since 2018, state pensions rose just 20 percent last year, leaving retirees in poverty. The depreciating national currency has contributed to consumer inflation put by the IMF at 30 percent for 2020 and by the Statistical Center of Iran at 40 percent.  Retirees demand the implementation of article 96 of the social security law that requires the government match pensions to rising prices

On Saturday, retired worker Esmaiil Gerami was arrested at his home after distributing a call for Sunday’s gatherings and was taken to Tehran’s Evin prison, the Free Labor Union of Iran reported. Security agents searched his home and confiscated personal belongings, including five mobile phones belonging to his family.

Labor protests have been weekly in various parts of Iran over the past three years. Last year alone there were around 155, Human Rights Activists News Agency (HRANA) has reported.

Large nationwide popular protests in December 2017 were triggered by rising prices and turned into anti-Islamic-Republic unrest. Hundreds of striking and protesting workers and labor activists have been arrested since 2017, many spending months in prison. Some are still detained without trial.

City officials in Iran's capital Tehran are planning to put locks on large waste containers in the streets to prevent garbage pickers from accessing waste. END_OF_DOCUMENT_TOKEN_TO_BE_REPLACED

The Biden Administration has confirmed to the US Congress that sanction imposed by its predecessor on Iran have drastically reduced Iran's trade with the world. END_OF_DOCUMENT_TOKEN_TO_BE_REPLACED

The UK government said on Sept 20 that Britain would "not rest" until all its dual nationals being held in Iran were returned home. END_OF_DOCUMENT_TOKEN_TO_BE_REPLACED