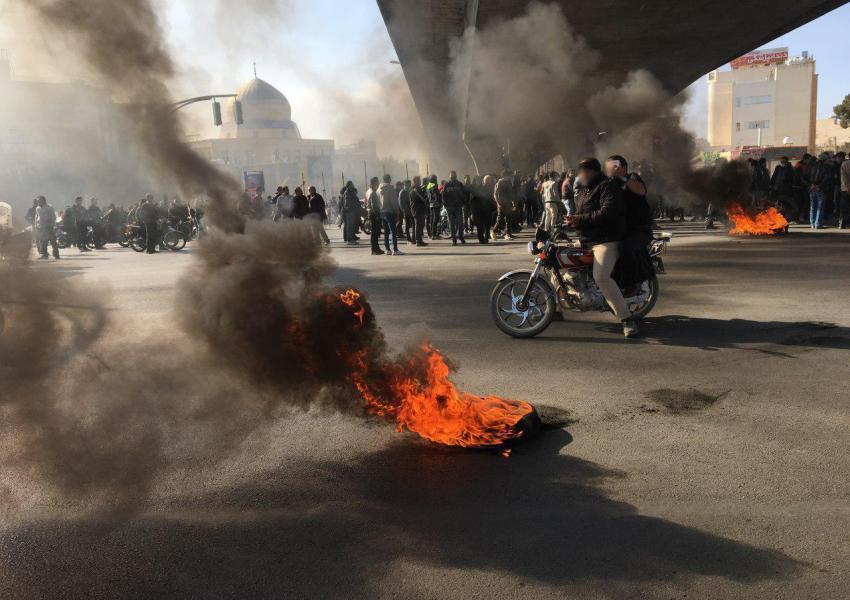 The protests in Iran continue for the third day in cities across the country while the reports indicate that dozens of protesters have been killed and hundreds injured and the Internet has been cut off for most of the country.

According to the reports, Iranian citizens in Tehran and cities across the country continued their protests throughout Saturday night into Sunday morning, ignoring the pressure and warnings from the police and security forces.

Gunfire was heard in Tehran all through the night and police have also used teargas on protesters in east and center of the city.

Protesters have blocked some streets in the capital and attacked government banks and buildings while chanting against the regime, its leader, and its officials. Anti-riot police is heavily present across the capital.

In Tabriz university students have joined the protests and shut down their classes.

Internet was cut off for most of the country and many are not able to upload videos and photos of the protests. One official in the ministry of communications told ISNA that the order for the Internet blackout came from the supreme council of national security.

The third day of mass uprisings in Iran continues as the supreme leader of the Islamic Republic, Ayatollah Ali Khamenei, officially supported the decision to triple the price of gasoline and called the protesters across the country “thugs” and asked the security forces to do their duties.

Hours earlier, Abdolreza Rahmani Fazli, the Minister of Interior, warned about the “end of tolerance” and announced forces that operate “under special circumstances” will face the protesters. The minister had previously denied any protests.

The protests began on Friday when the price of gasoline was tripled, but it immediately became anti-regime and anti-foreign intervention protests, with the protesters across the country chanting “No to Gaza, no to Lebanon, I sacrifice myself only for Iran” and “down with dictator” and other similar chants.

City officials in Iran's capital Tehran are planning to put locks on large waste containers in the streets to prevent garbage pickers from accessing waste. END_OF_DOCUMENT_TOKEN_TO_BE_REPLACED

The Biden Administration has confirmed to the US Congress that sanction imposed by its predecessor on Iran have drastically reduced Iran's trade with the world. END_OF_DOCUMENT_TOKEN_TO_BE_REPLACED

The UK government said on Sept 20 that Britain would "not rest" until all its dual nationals being held in Iran were returned home. END_OF_DOCUMENT_TOKEN_TO_BE_REPLACED