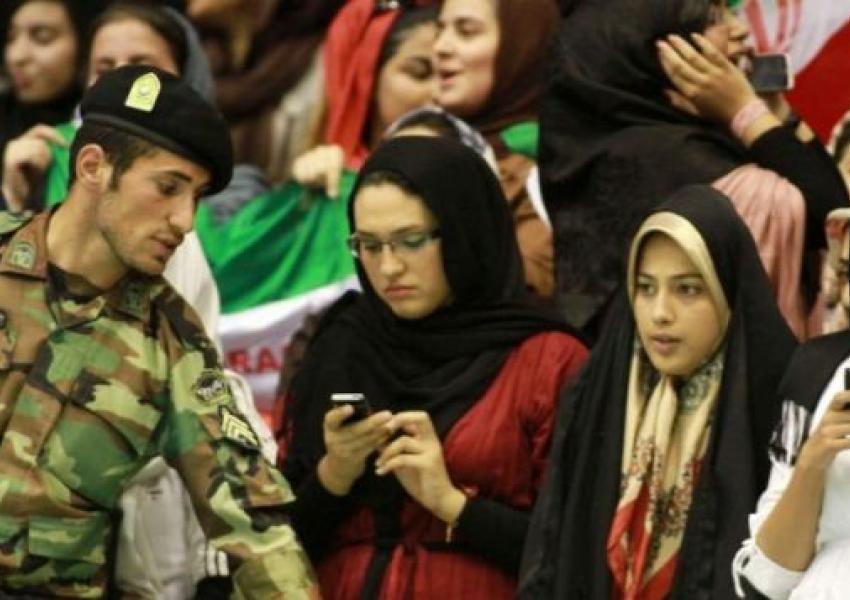 Having spent a long time fighting and protesting, a limited and selected number of Iranian women were allowed to enter a stadium and watch the match between the national teams of Iran and Bolivia. Masoud Soltanifar, Iran’s minister for sports, twitted that “with our women’s attendance at the stadium during this match, they are joining the proud moments of our national sports glory, while at the same time [they are] preserving the moral and Islamic values”. Many women, who were not allowed to the stadium on the same day, call out this incident as “fake, insincere show” which included only those women with strong connections to the ruling class. It is clear now that the Iranian regime will find it hard to continue this approach. Iran’s Football Federation is trying to pave the way for another group of Iranian women to enter stadiums during the final match of the Asian League. On the other hand, powerful conservatives have not ceased opposing such plans, and in one incident the Attorney General threatened the government to legal challenge if they ever let women enter stadiums again. This article looks at the challenges before the government to manage this situation.

The whole issue of women being able to attend stadiums has become one the most serious demands put forward by Iranian activists in recent years. Women have run several campaigns to protest the government policy. All these attempts have sadly been fruitless. Many women, nonetheless, managed to enter stadium wearing male makeup and then reported their achievement on the social media.

Syrian women were allowed to enter the stadium in the last football match between Iran and Syria in Tehran while Iranian women were not granted permission. This caused a great amount of criticism, but no official response or explanation was offered. This remained unchanged until a group of selected women were permitted to watch the Iran-Bolivia match at the stadium recently.

The irony is that since the Islamic revolution of 1979, all Iranian governments, whether a conservative or a reformist, openly expressed that they seriously wanted to end this ban on women. As part of his populist agenda to attract more youth and women, Ahmadinejad was more assertive and even aggressive in opposing this situation, and right from the beginning of his presidency, asked for an end to this discrimination. His assertion was responded harshly by conservative clerics to the extent that a few of them issued Fatwas refusing the possibility of any changes in this matter. Mesbah Yazdi, one of the few high-ranking clerics who had supported Ahmadinejad during the election campaign, opposed this issue in public. In addition, Ahmadinejad is said to have received several threatening messages which he did not seem to care about much. The Supreme Leader, Ali Khamenei, who never wants to disagree with conservative clerics, ordered Ahmadinejad to withdraw from his stance.

For Rouhani, despite his promises about more freedom for women in his campaign, he did not succeed either, probably because he was engrossed with the nuclear negotiations that led to the Iran nuclear deal.

In a meeting with Rouhani, president of FIFA insisted on Iranian women being able to enter stadiums. He stated that more cooperation with Iran would hinge on their women entering stadiums. Even though Rouhani promised, at the same meeting, to facilitate this issue, it was already known that without high profile religious leaders and clerics’ consent, it is impossible to actualize.

Moreover, after Saudi Arabia finally opened its stadium to women, Iran became the only country in the world barring women from this right. It is likely that this helps FIFA put more pressure on Tehran to end this discrimination. Previously, FIFA did not challenge Saudi Arabia over this issue since the kingdom provides the federation with financial aids. Iran enjoyed the same privilege under the shadow of the Saudis’ immunity. Now only Iran practicing this discrimination as well as the social pressure from Iranian women would make FIFA be more forceful in dealing with this issue.

The hard-line religious conservatives in Iran have stood firm on their disapproval of women at stadiums. They seemingly think that by consenting to this change, a red line is passed which consequently could shift the moral position on men and women relationships in the society at large. Montazeri, Iran’s Attorney General, a representative of this form of thinking, considered this change a harm and an insult to the social life, and went further to call it a sin which can’t be justified by any means. He argued that when a woman goes to a stadium, she is exposed to men who are in sportswear and often half-naked.

Ali Motahari, the deputy speaker of Iran’s Islamic parliament, who is famous for being a cultural conservative, recently said that women attending sports venues for activities like swimming, wrestling, basketball, and volleyball is against the Sharia law, but they can go to the football stadiums as players are decently covered. He also added to the advantage of football by saying that players’ bodies are not really visible from the distance of podiums to a football pitch.

Both statements by the attorney general and the deputy speaker show that such a mentality is out of touch with the current social atmosphere of the country and it cannot carry on.

In other cases in the past, hard-line religious conservatives had to withdraw from their positions and accept a moderate stance with regard to women’s participation in the modern ways of social life. While there are numerous channels in the 21st century through which men and women can have free relationships, talking about women being aroused by seeing a man’s body in sportswear from several meters is purely an insult to women and reveals a great amount of ignorance about the social realities.

Many experts believe this skewed understanding of sexuality has caused serious problems in society. Relevant organizations report that free sexual relationships are common among a large number of people. According to these confidential reports, the age for engaging in the first sexual relationship has lowered to the middle school (12-15 years of age) for girls. Given this data, the Attorney General is still worried that seeing a man in shorts would excite mature women to commit a sin.

Such attitudes show their troubled system of thought and indicate a complete ignorance about their surrounding world. This also sheds light on a huge gap between the legal system in the country and the fast-changing social reality.

Although “some selected women” were allowed to watch the match with Bolivia, many tend to take the pessimistic view and believe this was a one-off show (to appease FIFA for some time). But looking back at the history of social changes, any infiltrations, how small it might be, would be the starter to bigger steps towards the goal. Moreover, the persistent, realistic, and tireless movement of Iranian women has been the only group of actors in the Iranian political sphere that managed to have some of their demands responded to by the Islamic regime. The regime was able to suppress many political parties and groups, despite some were major actors, but it has had to take steps backward whenever challenged by the women movement. Now Rouhani can deliver one of his promises by legalizing women entering stadiums, but he needs to find something to offer to the conservatives to satisfy them. The only bargaining card for Rouhani could be the threats by FIFA against the national team. If the national team was barred from some international tournaments, neither the supreme leader nor other religious leaders would want to be confronted the huge number of football fans in the country.  The regime seems to soon succumb to the pressure from FIFA being added up to the strong social demand by the public to open the stadiums to all Iranians including women.

City officials in Iran's capital Tehran are planning to put locks on large waste containers in the streets to prevent garbage pickers from accessing waste. END_OF_DOCUMENT_TOKEN_TO_BE_REPLACED

The Biden Administration has confirmed to the US Congress that sanction imposed by its predecessor on Iran have drastically reduced Iran's trade with the world. END_OF_DOCUMENT_TOKEN_TO_BE_REPLACED

The UK government said on Sept 20 that Britain would "not rest" until all its dual nationals being held in Iran were returned home. END_OF_DOCUMENT_TOKEN_TO_BE_REPLACED