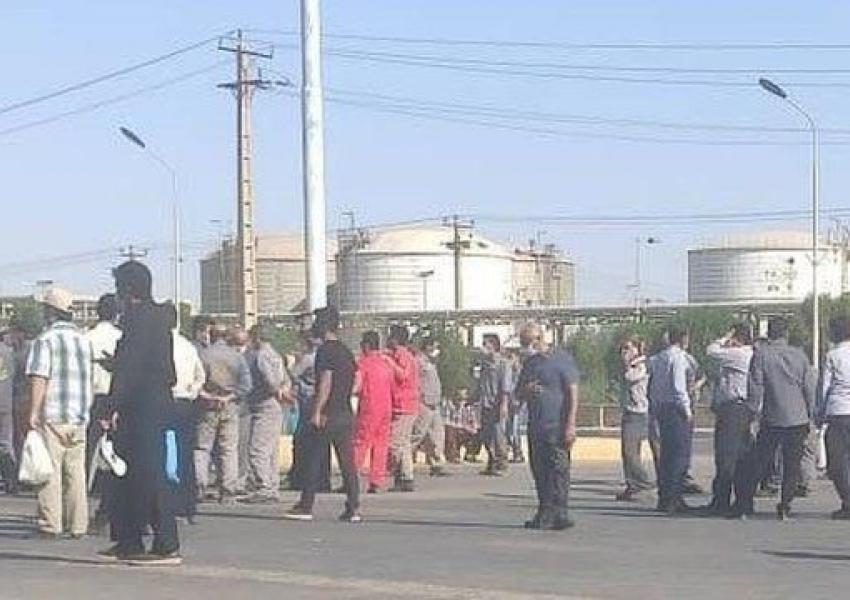 Workers at power plants and refineries strike and protest across Iran

Workers continue to strike and protest in Iranian refineries, power plants, and factories across the country for the fifth day. On Wednesday there were videos on social media of workers in Isfahan refinery on strike.

Free Workers Union Telegram channel reported that the refinery’s security forces initially tried to prevent the workers from leaving the site, but the workers’ insistence forced them to open their exit.

The channel also reported that most of the workers of several refineries in the south of Iran have left their dormitories and returned to their own cities.

Another video was also released of workers protesting in another company in Southern Pars oil and gas field. The workers went on strike after their negotiations over their delayed paychecks with the management failed.

The strikes in the oil, gas, and petrochemical industries started on Saturday.

The current protests and strikes which began in four provinces simultaneously are among the largest workers strikes in the past 40 years, with reportedly over 10000 workers participating.

The workers of Haft-Tappeh Sugarcane company also continued their strike for the 52nd day by gathering in front of Shush governor’s office.

City officials in Iran's capital Tehran are planning to put locks on large waste containers in the streets to prevent garbage pickers from accessing waste. END_OF_DOCUMENT_TOKEN_TO_BE_REPLACED

The Biden Administration has confirmed to the US Congress that sanction imposed by its predecessor on Iran have drastically reduced Iran's trade with the world. END_OF_DOCUMENT_TOKEN_TO_BE_REPLACED

The UK government said on Sept 20 that Britain would "not rest" until all its dual nationals being held in Iran were returned home. END_OF_DOCUMENT_TOKEN_TO_BE_REPLACED