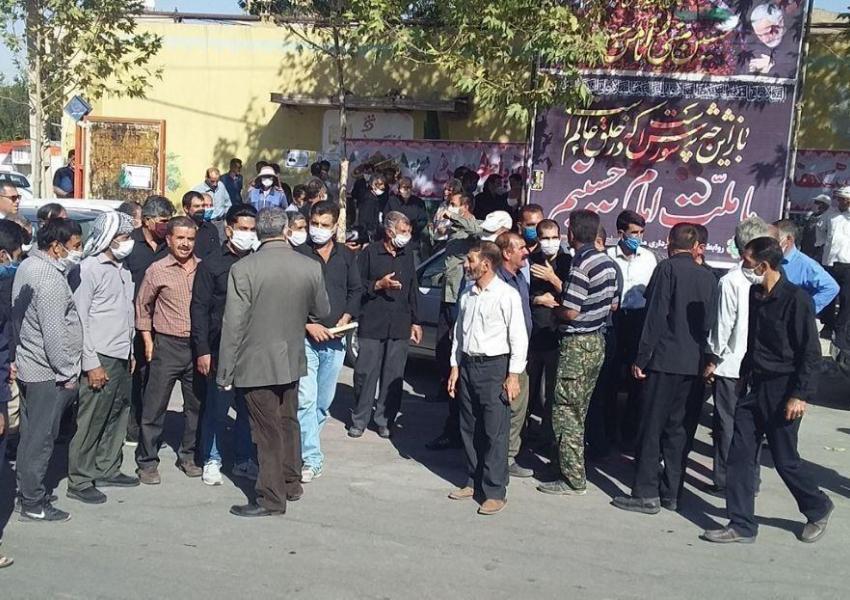 Workers Strike In Khorramabad And Haft Tappeh; ‌Sit-ins In Tabriz

Remittance holders who have lost their wealth to Azvico Automobile Company have rallied in Tabriz as workers of Haft Tappeh Sugarcane Company and the Khorramabad Municipality continue their strikes.

Haft Tappeh has seen the 73rd day of strike in front of the Governor’s office in the city of Shush on Wednesday, August 26th.

The workers held placards demanding that their demands be addressed. A new round of protests by these workers has been ongoing for more than two months.

Although authorities have been negotiating with these workers in recent weeks, their demands have not yet been met.

The protesting workers of Haft Tappeh demand the company to go back to the government and under the supervision of the workers. Their other demands are the payment of deferred wages, the return of fired workers, and pursuing the corruption charges of the company’s CEO.

Meanwhile, in Khorramabad, a group of municipal workers in the third district has gone on strike and gathered in front of the municipality’s building to protest the non-payment of their wages.

There have also been reports of a gathering in front of the governor's office in East Azerbaijan. The protesters were demanding the receipt of 6,000 vehicles they had pre-purchased two years ago from Azvico Automobile Company.

Azovico has delivered none of the pre-purchased vehicles claiming that the company has not been manufacturing cars; yet it has been selling its EMG-360 cars in the market at the current price.

In recent weeks, workers, employees, and pensioners from several government organizations, industrial plants, and petrochemical and oil complexes have gone on strike to protest the non-payment of their wages.

City officials in Iran's capital Tehran are planning to put locks on large waste containers in the streets to prevent garbage pickers from accessing waste. END_OF_DOCUMENT_TOKEN_TO_BE_REPLACED

The Biden Administration has confirmed to the US Congress that sanction imposed by its predecessor on Iran have drastically reduced Iran's trade with the world. END_OF_DOCUMENT_TOKEN_TO_BE_REPLACED

The UK government said on Sept 20 that Britain would "not rest" until all its dual nationals being held in Iran were returned home. END_OF_DOCUMENT_TOKEN_TO_BE_REPLACED