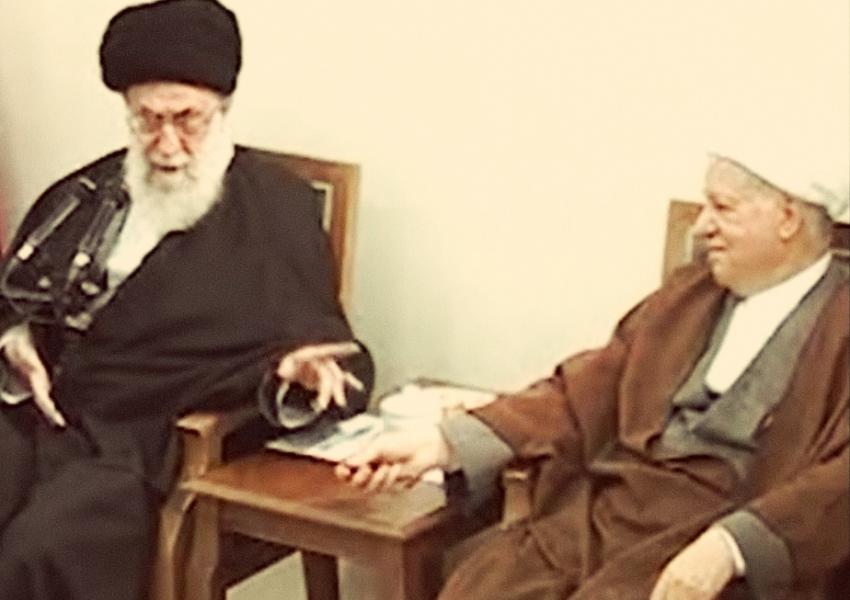 A five-minute film showing Iran’s Supreme Leader Ali Khamenei in 2012 criticizing a proposal for a diplomatic initiative to the United States and admonishing Akbar Hashemi Rafsanjani has been published on Khamenei’s official website and aired on state-controlled television.

Khamenei uses a sharp tone addressing Rafsanjani, former president and veteran of the 1979 Revolution, in a meeting of Iran’s main leaders, including then-president Mahmoud Ahmadinejad. Tehran was at the time under international sanctions, including an arms embargo, having been censured by the United Nations Security Council in a series of resolutions from 2006 to 2010 over its nuclear program.

Going back to his role in the 1985-87 ‘Iran-contra’ affair − when the United States supplied arms to Iran for the war against Iraq – Rafsanjani was seen as pragmatic in foreign affairs. While disagreements between Khamenei and Rafsanjani were hardly secret, the assertive tone used by Khamenei in the film is startling.

While Rafsanjani tells the leader that a list of pros and cons of talks with the US had been prepared by Hassan Rouhani, who was national security official until 2005, Khamenei angrily replies that he has seen the list and found only positive factors. "You and Rouhani only spoke about the benefits of talks but said nothing of its harm,” Khamenei insists.

Nonetheless, the meeting, in March or April 2012, was followed in July by the first direct meeting between Iran and US, in Oman, that would lead to the 2015 nuclear deal, the JCPOA (Joint Comprehensive Plan of Action).

Disclosure of the 2012 footage may suggest preparation of the Iranian public for an end to talks involving the US in Vienna over securing Washington’s return to the JCPOA, from which President Donald Trump withdrew in 2018 before imposing ‘maximum pressure’ sanctions. The release of the video also emphasizes Khamenei’s authority over other leaders in the Islamic Republic, especially on the nuclear issue and relations with the US.

With the talks on hold until President-elect Ebrahim Raisi (Reesi) takes office on August 5, American and some European officials are putting onus for progress on Iran, while Kazem Gharibabadi, Iran’s envoy to the International Atomic Energy Agency, said last week that Washington was refusing to lift sanctions on 500 entities or individuals, a refusal Tehran says contravenes the JCPOA.

"I think Khamenei is again driving Iran to huge military, security, and economic tensions,” Mehdi Mahdavi-Azad, an Iranian political analyst, told Iran International TV Monday adding that the reason this film is published now is that despite the insistence of many officials to continue the Vienna talks, Khamenei wants to put an end to it.

In the same meeting, Khamenei says there is recorded evidence from a meeting of the Supreme National Security Council (SNSC) in which Rafsanjani, who was chairman of the Expediency Council, admits he had no counter-argument to Khamenei's reasoning for opposing talks with Washington. "Yes, I said that," Rafsanjani replies.

The video which was aired under the headline ‘Lesson for the Future’ consists of excerpts of Khamenei's remarks in various meetings and speeches on relations with Washington.

The 2012 discussion, according to former minister of culture Hossein Saffar-Harandi, had never been made public. In an interview Sunday after the video was aired, Saffar-Harandi, a principlist opponent of the JCPOA, said Khamenei was upset because a few days before Rafsanjani had said that "having relations with the US was necessary." Khamenei, he said, ordered cameramen from the room but told them to leave the cameras running.

Saffar-Harandi said Khamenei had lifted the ban on showing the 2012 discussion due to the Vienna talks, and accused Rouhani of seeking an agreement "at any cost."

The film also showed a more recent clip where Khamenei airs strong criticism of the US, calling American leaders “liars…[who] won't honor their own words.” The film highlights photos of US President Barack Obama and then-vice-President Joe Biden, who signed the 2015 agreement, and then Trump.

As president, Biden has continued Trump’s ‘maximum pressure,’ apparently to force further Iranian concessions.  “This proved that we can never sit and talk with the US as a reliable partner,” Khamenei says in the video. Iran has reportedly in Vienna demanded guarantees that the US cannot again unilaterally withdraw from the JCPOA.

Iran's president Ebrahim Raisi addressed the UN General Assembly saying his country wants a resumption of nuclear talks with world powers to lead to the removal of US sanctions. END_OF_DOCUMENT_TOKEN_TO_BE_REPLACED

President Joe Biden told the UN General Assembly on September 21 that he will prevent Iran from getting nuclear weapons. END_OF_DOCUMENT_TOKEN_TO_BE_REPLACED

India has seized nearly three tons or $2.72 billion worth of Afghan heorin shipped from Iran. END_OF_DOCUMENT_TOKEN_TO_BE_REPLACED

Iran's foreign ministry spokesman has said that nuclear talks with world powers will start in a few weeks but has not given a firm date. END_OF_DOCUMENT_TOKEN_TO_BE_REPLACED

Debate continues in Iran over the country's nuclear negotiating strategy, with some praising a tougher approach and others cautioning against dogmatism.
5 hours 57 min ago

There will be no meeting of the Iran nuclear deal participants on the sidelines of the UN General Assembly this week, the EU and Iran have announced.
11 hours 18 min ago