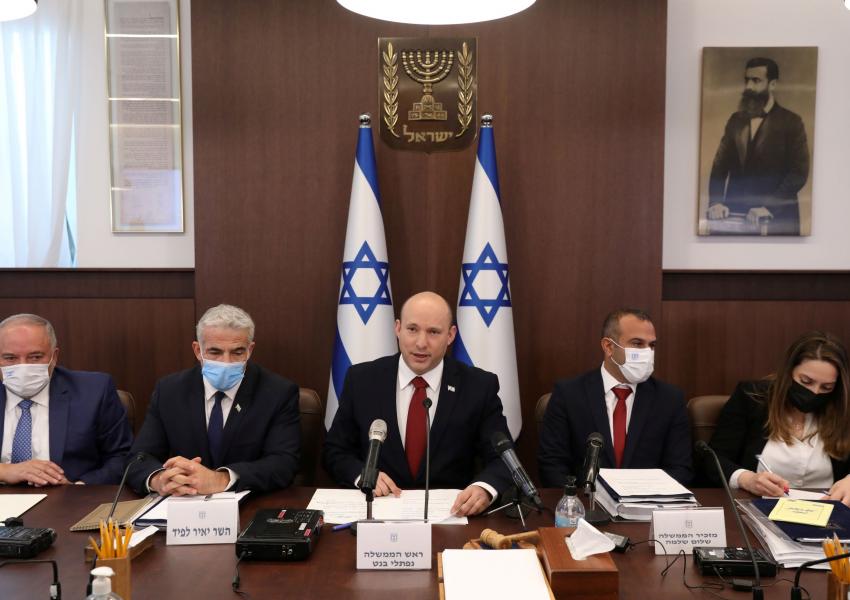 Israel is responding to the latest suspected Iranian attack on a commercial vessel on Thursday, that killed two crew members, by deploying its diplomatic muscle to rally the international community against what it says is “Iranian terrorism”.

Iran said on Sunday it was not involved in the attack on the Israeli-managed petroleum product tanker off the coast of Oman. Iranian Foreign Ministry spokesman Saeed Khatibzadeh told a weekly news conference "These accusations about Iran's involvement are condemned by Tehran."

Israeli Prime Minister Naftali Bennett accused Tehran Sunday of "trying to shirk responsibility" for Thursday's incident, and called its denial "cowardly". "I declare unequivocally: Iran is the one that carried out the attack on the ship," adding that intelligence supports his claim. "We, in any case, have our own way to relay the message to Iran," Bennett said.

Foreign Minister Yair Lapid on Saturday contacted the Romanian and British governments, whose citizens died after the Israeli-managed tanker, the Mercer Street, was hit by projectiles in the Arabian Sea, probably armed drones. He then had a conversation with US Secretary of State Antony Blinken.

“We are working together against Iranian terrorism that poses a threat to all of us by formulating a real and effective international response. It was a weekend of extensive diplomatic activity. I spoke with my counterparts in the UK and Romania,” Lapid tweeted midnight on Saturday after speaking with.

The US State Department issued a statement after the Blinken-Lapid conversation saying, “They agreed to work with the United Kingdom, Romania, and other international partners to investigate the facts, provide support, and consider the appropriate next steps.”

Lapid had already announced on Friday that he has instructed Israeli diplomats to lobby the United Nations for action against Iran. “Iran is not just an Israeli problem, but an exporter of terrorism, destruction, and instability that are hurting us all. The world must not be silent in the face of Iranian terrorism that also harms freedom of shipping,” he had said in a statement.

Lapid has also spoken with his British counterpart Dominic Raab, stressing “the need to respond severely to the attack on the ship in which a British citizen was killed.”

Al Alam TV, the Iranian government's Arabic-language television network, cited unnamed sources as saying the attack on the ship came in response to a suspected, unspecified Israeli attack on Dabaa airport in Syria.

The US Navy, which received a distress call from the tanker after the attack, rushed to its aid. "US Navy explosives experts are aboard to ensure there is no additional danger to the crew and are prepared to support an investigation into the attack," said the Central Command, which oversees American military operations in the Middle East and Central Asia. "Initial indications clearly point to a UAV-style (drone) attack," it added.

Media reports in recent months have pointed to an ongoing sea war between Israel and Iran, with sneak attacks on commercial shipping, five such attacks have been ascribed to Iran. But this time there are to fatalities from two European nations, and Israel seems determined to press the issue.

Meanwhile diplomatic efforts at reaching an agreement over Iran’s nuclear program are stalled, with Iran saying that it will resume the Vienna negotiations started in April some time after its new president Ebrahim Raisi takes office.

The situation in Iran is tense and unpredictable with daily anti-government protests since mid-July. The Islamic Republic’s Supreme Leader again called on officials on July 28 not to trust the West, but his options are narrowing with US sanctions strangling the economy and the population becoming ever more restless.

Iran's president Ebrahim Raisi addressed the UN General Assembly saying his country wants a resumption of nuclear talks with world powers to lead to the removal of US sanctions. END_OF_DOCUMENT_TOKEN_TO_BE_REPLACED

President Joe Biden told the UN General Assembly on September 21 that he will prevent Iran from getting nuclear weapons. END_OF_DOCUMENT_TOKEN_TO_BE_REPLACED

India has seized nearly three tons or $2.72 billion worth of Afghan heorin shipped from Iran. END_OF_DOCUMENT_TOKEN_TO_BE_REPLACED

Iran's foreign ministry spokesman has said that nuclear talks with world powers will start in a few weeks but has not given a firm date. END_OF_DOCUMENT_TOKEN_TO_BE_REPLACED

Debate continues in Iran over the country's nuclear negotiating strategy, with some praising a tougher approach and others cautioning against dogmatism.
9 hours 25 min ago

There will be no meeting of the Iran nuclear deal participants on the sidelines of the UN General Assembly this week, the EU and Iran have announced.
14 hours 46 min ago