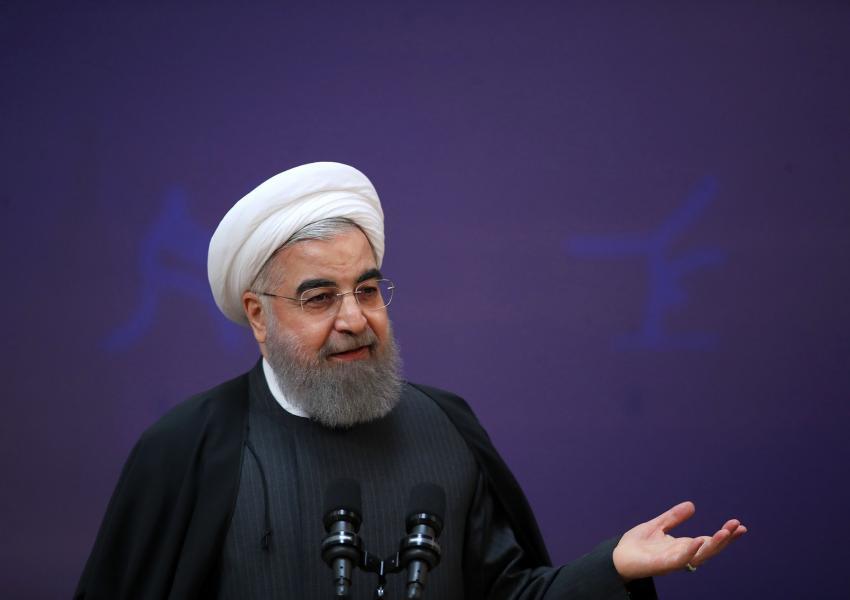 Let Those ‘Successful’ In Diplomacy Do Their Job, Rouhani Tells Hardliners

President Hassan Rouhani on Thursday slammed those behind a draft parliamentary bill that was amended after it sought to reduce Iran’s cooperation with United Nations nuclear inspectors. During a speech at a government inauguration ceremony, Rouhani said his hardline rivals had been “over enthusiastic,” presumably in their efforts to stymie his efforts to encourage the United States back into Iran’s 2015 nuclear deal with world powers.

Rouhani said Iran’s nuclear policy was best conducted by “those who have over 20 years of experience and succeeded in diplomacy [related to the nuclear issue] and defeated the United States in the UN over and over again.”

Rouhani was led nuclear talks with Europe as Secretary of the Supreme National Security Council as far back as the 2004 Paris Agreement, 11 years before he was elected president in 2013.

In an emotional atmosphere after last Friday’s killing of nuclear scientist Mohsen Fakhrizadeh, many parliamentarians contended that Iran had gained nothing from the 2015 deal and even blamed it for Fakhrizadeh’s demise.  Parliament reviewed and passed a draft law on Tuesday that would have required the government and Atomic Energy Organization of Iran to limit co-operation with UN inspectors and to increase uranium enrichment if international sanctions were not lifted within two months of the bill’s approval. The move was widely seen as intended to cut off a potential diplomatic path identified by Rouhani after the election success of Joe Biden, who during his campaign promised to revive the 2015 deal.

The watchdog Guardian Council quickly rejected the bill, with parliament then agreeing to accept an amendment making the bill’s provisions advisory rather than mandatory.  Within hours, the Council approved the bill as amended and on Wednesday Parliamentary Speaker Mohammad Bagher Ghalibaf (Qalibaf) dispatched it to the president for “implementation.”

Some analysts have argued that the furor over the bill was pre-planned in order to frighten Western leaders with the prospect of hardliners constraining Rouhani, but others argue political differences are intensifying as June’s presidential election approaches. The language used by Rouhani and Ghalibaf has been colorful, while leading principlist newspaper editor Hossein Shariatmadari wrote in late November that anyone wanting to negotiate with the Biden administration was an “infiltrator.”

Rouhani is ineligible to stand for a third term in June’s election, when Ghalibaf – who previously stood unsuccessfully against both Rouhani and Mahmoud Ahmadinejad – may be a candidate. Rouhani on Thursday promised to “bequeath any success of the administration [in solving the issue of sanctions]” to whoever followed him.

The Rouhani government have insisted that parliament lacks the authority to set constraints over management of the nuclear issue. In remarks to reporters on Wednesday, Vice-President Es’hagh Jahangiri reiterated the argument used earlier by government spokesman Ali Rabiei that − by order of Supreme Leader Ali Khamenei, and “based on the constitution − the SNSC was in charge of the nuclear case with its decisions duly ratified by Khamenei. As president, Rouhani heads the SNSC.

Iranian political journalist Reza Haji-Hosseini told Iran International TV on Thursday that further efforts by parliament to impose its will on the administration were unlikely to be any more successful. “They don’t really take much heed of what the parliament is doing,” he said. “They often ignore the parliament’s legislation and avoid implementing them with the excuse that such laws impose a financial burden on the government for which no budget has been allocated.”

City officials in Iran's capital Tehran are planning to put locks on large waste containers in the streets to prevent garbage pickers from accessing waste. END_OF_DOCUMENT_TOKEN_TO_BE_REPLACED

The Biden Administration has confirmed to the US Congress that sanction imposed by its predecessor on Iran have drastically reduced Iran's trade with the world. END_OF_DOCUMENT_TOKEN_TO_BE_REPLACED

The UK government said on Sept 20 that Britain would "not rest" until all its dual nationals being held in Iran were returned home. END_OF_DOCUMENT_TOKEN_TO_BE_REPLACED