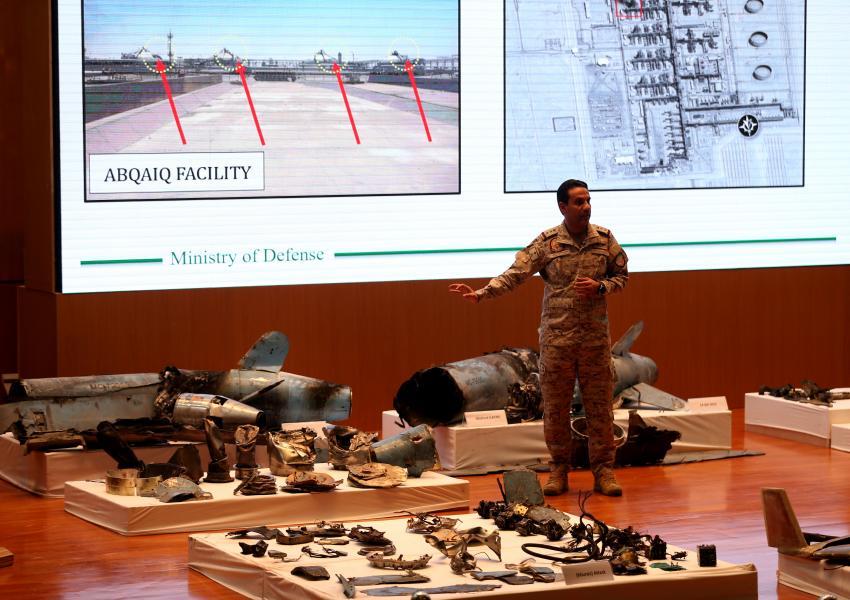 Riyadh: Missiles Launched at Aramco Were Made By IRGC

The Defense Ministry of Saudi Arabia exhibited remains of missiles and drones that were used in the recent attacks against the country’s oil facilities and emphasized on Iran’s role in these attacks.

The spokesperson for the Saudi Defense Ministry said on Wednesday that the missiles launched at Aramco were “Ya Ali” cruise missiles made by Iran’s Islamic Revolutionary Guard Corps (IRGC).

Maleki stressed that the missiles could not have been fired from Yemen: “The attacks were launched from the north and was definitely supported by Iran. The evidence you see before you make it undeniable.”

He went on to say that Iran not only targets economic institutions, but it also attacks residential areas.

Maleki called on the international community to respond to the attack on Aramco and said not only Saudi Arabia, but all the Arab countries in the region are the targets of Iran’s malicious activities.

Previously, the Saudi ambassador to London had also accused Iran of being responsible for the attacks against Saudi oil facilities. The diplomat told BBC that it is almost certain that Iran has supported these attacks.

He added that Saudi Arabia will not respond immediately because conflict “is the last thing that we need.”

City officials in Iran's capital Tehran are planning to put locks on large waste containers in the streets to prevent garbage pickers from accessing waste. END_OF_DOCUMENT_TOKEN_TO_BE_REPLACED

The Biden Administration has confirmed to the US Congress that sanction imposed by its predecessor on Iran have drastically reduced Iran's trade with the world. END_OF_DOCUMENT_TOKEN_TO_BE_REPLACED

The UK government said on Sept 20 that Britain would "not rest" until all its dual nationals being held in Iran were returned home. END_OF_DOCUMENT_TOKEN_TO_BE_REPLACED