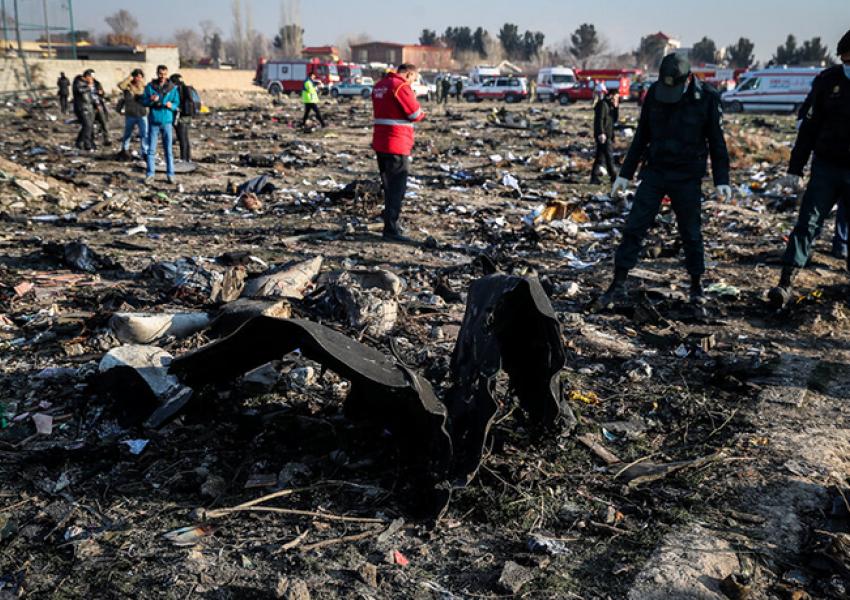 Iran's final report on the downing of Ukraine's Flight PS752 on January 8, 2020, killing all 176 onboard, has attributed it to a Revolutionary Guard (IRGC) air-defense unit misidentifying the commercial airliner as a "hostile target."

The 285-page report by the Aircraft Accident Investigation Bureau, released on Wednesday [March 17], confirmed that two missiles were fired consecutively at the aircraft. After the first exploded, the unharmed cabin crew tried to manage the situation. The report said it was likely that the second missile, which exploded 12 seconds later, "did not affect the aircraft."

"The detonation of the first missile warhead in the proximity of the aircraft caused damage to the aircraft systems, and the intensification of the damage led the aircraft to crash into the ground and explode instantaneously," the report said. Its account almost fully corresponds to explanations offered by IRGC officials following the plane’s downing.

Iranian officials for three days denied shooting down the plane but finally the IRGC accepted responsibility, attributing it to human error. Tehran for months refused to hand over flight recorders to a country capable of decoding them or to issue a comprehensive report on the incident, angering victims' families, the Ukrainian government and Canada, the country with the highest number of citizens on the flight.

The report said that the moving of a mobile air-defense systems around 100 meters on the day of the incident had led the operator to err in miscalculating by 105 degrees the alignment between the plane and the missile system as well as other locations − presumably sensitive facilities. The operator, the report says, failed in attempts to contact command, and took the decision to fire.

Iran’s Civil Aviation Organization (CAO) in February said Iran had not decided to close the country's airspace on January 8, 2020, after Iran fired ballistic missiles at a United States base in Iraq in response to the US drone strike on January 3 killing Iranian general and Qods Force commander Qasem Soleimani in Baghdad. US commanders later revealed they would have retaliated against Iran if any Americans had died: 110 US soldiers suffered traumatic brain injuries.

The report makes no mention of the IRGC, which is sanctioned by the US, nor does it name the missile-defense operator or operators. Some social media users have compared the report to the court ruling in July 2000 that after 16 sessions sentenced only two out of 19 personnel of the Law Enforcement Forces for violence used at Tehran University to quell a student protest. One student was killed and 34 sustained considerable physical injuries including the loss of sight.

City officials in Iran's capital Tehran are planning to put locks on large waste containers in the streets to prevent garbage pickers from accessing waste. END_OF_DOCUMENT_TOKEN_TO_BE_REPLACED

The Biden Administration has confirmed to the US Congress that sanction imposed by its predecessor on Iran have drastically reduced Iran's trade with the world. END_OF_DOCUMENT_TOKEN_TO_BE_REPLACED

The UK government said on Sept 20 that Britain would "not rest" until all its dual nationals being held in Iran were returned home. END_OF_DOCUMENT_TOKEN_TO_BE_REPLACED