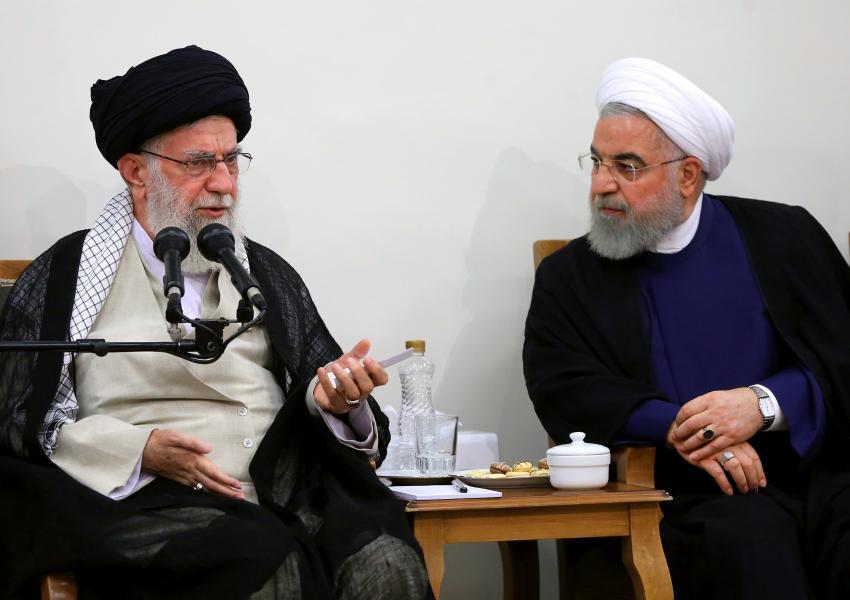 Khamenei warns about hijab and cultural infiltration by the enemies

In his meeting with the cabinet, the leader of the Islamic Republic of Iran, Ali Khamenei, noted what he called “cultural infiltration” and “organized and hidden anti-culture activities in society”, and asked the cultural institutions and even “Intelligence apparatus” to pay more attention to these issues.

During his meeting on Wednesday with President Rouhani’s cabinet, while referring to the “all-out attack by the foreigners”, Khamenei stated that “the enemies of the Islamic Republic say it is not possible to defeat the regime through “armed conflict and economic sanctions” and they must reach their goal through “cultural infiltration and influencing the minds and triggering the desires”.

The leader of the Islamic Republic called for more control over cultural products such as arts, cinema, books, and theater in order to “prevent these organized but hidden anti-cultural efforts” and added: “Cultural institutions such as the Ministry of Culture and Islamic Guidance, Islamic Development(Propaganda) Organization, Ministry of Education, Ministry of Science, state TV and radio, and even the Intelligence apparatus must be very sensitive about these issues.”

“We do not believe in closing the country’s cultural space, but we are very opposed to cultural perversion,” Ali Khamenei added.

Khamenei also talked about the matter of hijab and stated that the Islamic Republic’s concern about the issue of hijab in society is “correct and appropriate”. He went on to say that hijab is a “sharia law and judicial matter” and asked government organizations to “be careful in following the law” and “abide by religious conventions and rules.”

Regarding the conflict between India and Pakistan on Kashmir, the leader of the Islamic Republic called out the Indian government and asked them to stop their cruelty toward the Muslims living in Kashmir.

According to Khamenei, “the malicious British left this open would in Kashmir so that the conflict continues.”

City officials in Iran's capital Tehran are planning to put locks on large waste containers in the streets to prevent garbage pickers from accessing waste. END_OF_DOCUMENT_TOKEN_TO_BE_REPLACED

The Biden Administration has confirmed to the US Congress that sanction imposed by its predecessor on Iran have drastically reduced Iran's trade with the world. END_OF_DOCUMENT_TOKEN_TO_BE_REPLACED

The UK government said on Sept 20 that Britain would "not rest" until all its dual nationals being held in Iran were returned home. END_OF_DOCUMENT_TOKEN_TO_BE_REPLACED