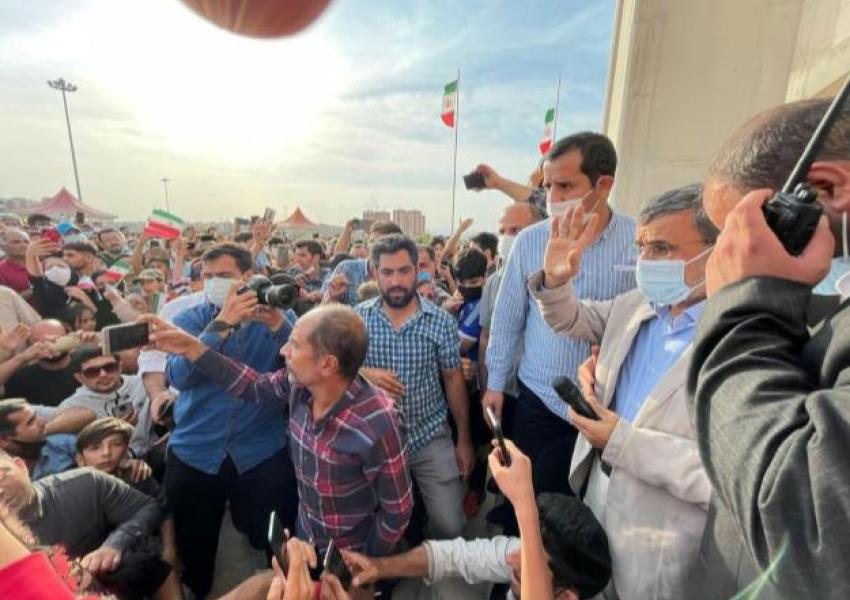 Mahmoud Ahmadinejad, Iran's former president, who was barred from running in the June 18 presidential election by the watchdog Guardian Council, on Monday evening took the virtual stage for a packed Clubhouse session and reiterated that he would not vote.

The former president claimed that all those who had questioned the results of the disputed 2009 presidential election, when he won a second term, had eventually admitted they had been wrong. Ahmadinejad blamed nationwide protests that followed the announcement of results and the crack-down on protesters on a corrupt intelligence and security group.

"I declare, firmly, that there was no vote-rigging," he told a total of over 30,000 listening to him in a ‘room’ of the Clubhouse application and in several linked rooms including Iran International TV's room. Clubhouse rooms are capped at 8,000. There were thousands more listening on other social media platforms.

Ahmadinejad, who has been demonized by many former principlist allies, is reaching out to reformists. "I was friends with Mir-Hossein Mousavi, I'm friends with him now," he said, referring to the former prime minister who refused to accept the results of the 2009 election and who has been under house arrest since February 2011 with his wife Zahra Rahnavard.

The intelligence ministry issued a statement Monday saying Ahmadinejad's recent remarks and allegations were "untrue and meant to cause confusion in the minds of the public." The ministry said it would respond in due time to prevent his claims being used by enemies of the Islamic Republic.

Ahmadinejad has several times said that Heydar Moslehi, the intelligence minister foisted on him by Supreme Leader Ali Khamenei between 2009 and 2013, blocked his access to information. Moslehi was at the center of tension between Ahmadinejad and Khamenei that came to a head in 2011 when Khamenei refused to allow Moslehi to resign. On May 29, Moslehi said that some of the information Ahmadinejad had persistently demanded was meant only for the eyes of Khamenei.

Ahmadinejad’s supporters are sore that he was not qualified to stand in the June 18 election, just as he was barred in 2017. In a note published on Sunday [May 30] by the website Dolat-e Bahar, one of Ahmadinejad's closest allies Ali-Akbar Javanfekr accused Khamenei of injustice and failing to prevent "massive and irreparable damage to society, and foundations of the country and the revolution" by not reinstating "unjustly" disqualified candidates. The "ruler of the Islamic society" could not remain indifferent and not try to set the wrong right if he knew the Guardian Council’s rulings were wrong, Javanfekr insisted.

Khamenei had defended the election watchdog's decisions on Thursday [May 27], noting that some presidential hopefuls – around 600 had registered – "may have been very qualified" but the Guardian Council could not "ascertain their qualification".

The council is a constitutional watchdog consisting of six high-ranking Shiite clerics appointed by Khamenei and six lawyers chosen by parliament from nominations by the judiciary. As well as considering legislation passed by parliament, it vets parliamentary and presidential election candidates.

Many analysts have suggested the council has engineered the election by not including candidates – like Ahmadinejad – who might mount an effective challenge to Chief Justice Ebrahim Raeesi (Raisi), generally seen as the front-runner and who has not resigned from the judiciary in order to stand. Ahmadinejad, who attributed any reluctance to vote among Iranians to his own disqualification, reiterated Monday he would not offer support to any of the seven candidates.

City officials in Iran's capital Tehran are planning to put locks on large waste containers in the streets to prevent garbage pickers from accessing waste. END_OF_DOCUMENT_TOKEN_TO_BE_REPLACED

The Biden Administration has confirmed to the US Congress that sanction imposed by its predecessor on Iran have drastically reduced Iran's trade with the world. END_OF_DOCUMENT_TOKEN_TO_BE_REPLACED

The UK government said on Sept 20 that Britain would "not rest" until all its dual nationals being held in Iran were returned home. END_OF_DOCUMENT_TOKEN_TO_BE_REPLACED