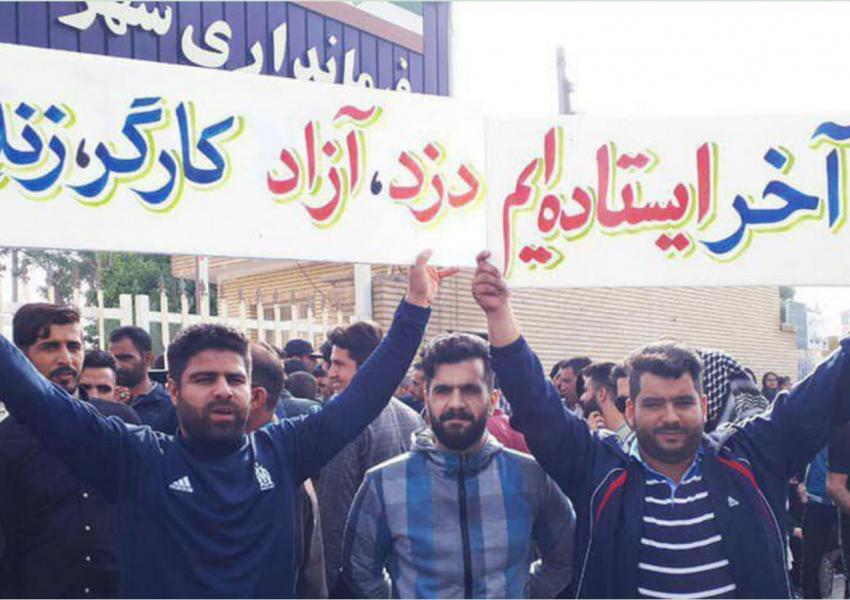 Six Most Popular Slogans by Iranian Protesters in 2018

It is a routine of Iran’s propaganda apparatus to select a few statements made by the Supreme Leader, Ayatollah Ali Khamenei, as the “words of the year”. The propaganda’s sole aim is to equal a person’s desires to the demands and concerns of a nation. To nullify this ridiculous equation, one can select the main and key slogans chanted by the protesters on the streets during 2018 that more justly qualify for the status of “words of the year”. I will review the common demands of Iranian protesters represented in their slogans and then I will discuss the tactics embedded in them.

2018: The Year for Endogenous Change

The year 2018 began with widespread protests in 100 cities all around the country. The first demonstration occurred on 28 December 2017 in Mashhad, but soon after that, it spread to every corner of Iran. Dervishes went through a brutal crackdown a months later which cost them hundreds of arrests and the execution of a member. There has not been a day since without unrest or a protest in the country. These protests did not start after the reinstatement of American sanctions, as the regime suggests, and nor are they related to foreign powers’ interference. There was a surge in the number and frequency of protests in summer, but they returned to the scattered pattern in the fall.

The protests in 2018 marked a new era in confronting the Islamic Republic. It also showed a turn in the protesters’ stance against the regime. There are four reasons for this: 1) It is now an era that the protesters do not have any care for any fractions of the regime, 2) To them, all factions of the regime have absolutely failed and the country is disoriented (based on polls 75% of Iranians believe so), 3) They do not agree with the regime’s approach, 4) They make it clear that they are determined about the future of their country.

There have been thousands of protests and demonstrations of different size and by different groups of people (politically or economically driven, students rallies, environmentalists, etc.) around the country in 2018. As such there have been hundreds of slogans which represented the participants’ demands. Among them, there were some common ones which were chanted at almost every protest. This commonality signals that there are similar concerns among all Iranians regardless of their background, professional, economic, or political affiliations.

Due to the absence of the right to free speech and free media in Iran, one can infer that these slogans are what the general public wants to shout out, so the world knows. Considering the nature of slogans, the demands must be expressed in the shortest way. Here follow some of the most popular ones:

This slogan [originally in Persian بیشرف] is shouted at regime agents (Police officers, security guards, or anti-protest troops) who attack protesters. This slogan aims at questioning their honor, respect, and patriotism. It also reveals the huge difference between what the regime tries to be famous for and what they really are. The one who claims to be on the people’s side would not beat up or detain a protesting worker who has not been paid for several months. Such a person would not throw tear gas at a peaceful demonstration of retirees and pensioners, for example.

“Our enemy is right here, they lie that it's USA”

This slogan discredits the conspiracy mentality which is the cornerstone of the regime’s anti-imperialism approach. It has been forty years of the regime officials smearing the US and blaming the American government for every inadequacy in Iran. Forty years seem to be enough for at least some parts of the society to realize that the domestic problems are rooted in corruption, privileges, and inefficiency. It appears that the anti-American leftism and Islamism which are the regime’s sources of inspiration are being abandoned by the Iranian protesters. Iranians seem to gather that the Anti-American ruling elites are, as a matter of fact, the thieves and embezzlers of the public wealth.

“Death to the Worker, Peace to the Tyrant”

This sarcastic slogan is an act to ridicule the crackdown of workers’ protests by the security and police forces. To prevent being brutally suppressed, protesting workers, ironically, admire the tyrants! The sarcasm in this slogan is of the same quality of the wit in other jokes about the ruling elites in all despotisms.

The slogan emphasizes the main form of public protest in Iran and encourages people from different sectors to join the strikes. Workers, teachers, truck drivers, and all people who have not received their paychecks for months have recently lost 70 to 100% of their purchasing power in 2018. They simply cannot see any prospect of things getting better. Some of the merchants also closed their shops for a while after the hike in gold prices and the national currency plummeting.

“Hossein is Their Chant, Theft is Their Pride”

This slogan points at their hypocrisy and their taking advantage of religious beliefs. It refers to the Shiite figure, Hossein, whom the regime’s narrative subscribes to all the time as the symbol of the oppressed and the honest.  The regime officials take advantage of religion to keep their own power and wealth. This slogan puts the ruling class against the ordinary Iranians and strips them of any religious legitimacy they may still have.

“One Less Embezzlement, Our Problems Solved”

This one aims at the systemic corruption within the system which is not denied by anyone anymore. The protesters here show they realize the link between the corruption and their current problems. The corruption along with the exhaustion of national wealth for foreign interferences have deprived the country of necessary infrastructures, welfare, and employment. People on the street want to say that they will not remain silent about this amount of corruption. Enough is enough.

City officials in Iran's capital Tehran are planning to put locks on large waste containers in the streets to prevent garbage pickers from accessing waste. END_OF_DOCUMENT_TOKEN_TO_BE_REPLACED

The Biden Administration has confirmed to the US Congress that sanction imposed by its predecessor on Iran have drastically reduced Iran's trade with the world. END_OF_DOCUMENT_TOKEN_TO_BE_REPLACED

The UK government said on Sept 20 that Britain would "not rest" until all its dual nationals being held in Iran were returned home. END_OF_DOCUMENT_TOKEN_TO_BE_REPLACED