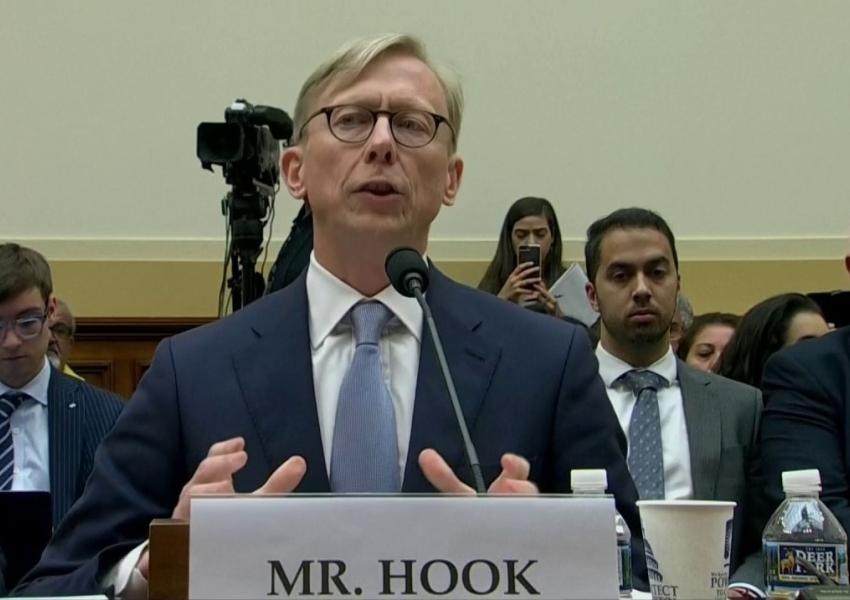 Brian Hook: Iran only understands the language of power

The US special representative for Iran, Brian Hook, emphasized that Tehran “is willing to negotiate under threat of isolation or economic pressure of military force” and said: “Iran has repeatedly rejected offers of meeting and negotiation with the United States. They believe their resistance is stronger than our pressure and they only understand the language of power.”

In his briefing at the Foreign Relations Committee of the Senate on Wednesday, Hook defended US policy toward Iran and said: “We have kept our policy within the limits of economic pressure and diplomatic isolation. We want to negotiate with Iran without preconditions. We want a comprehensive deal that would address Iran’s nuclear program, missile program, Iran’s support of international terrorism, and 40 years of hostage taking.”

Hook continued: “When we were in the JCPOA (nuclear deal) Iran continued to support Hezbollah, Palestinian terrorist groups, and Shia militias in Iraq. Iran continues to develop its missile systems and related technologies solely to export to regional proxies… [But now] Iran’s proxy groups have been weakened and Hezbollah and Hamas don’t receive any more money from Iran.”

Hook emphasized that Iran’s military budget has reduced due to the maximum pressure campaign and said: “Iran must change its behavior and act like a normal country, or watch its economy continue to decline. We do not want an armed conflict with Iran, but unfortunately, in recent months Iran has shown violent behavior and panicked aggression to intimidate the world through its proxy groups and has attacked oil tankers and Saudi oil facilities.”

He added: “Iran’s message to the international community is quite clear, if you do not allow us to conduct our normal level of terror, then we will behave even more badly until you do.”

Hook also mentioned the recent decision by Iran to allow women into football stadiums as a result of pressure from FIFA and concluded: “When the world comes together to push back against Iran, we do see a change in its behavior.”

City officials in Iran's capital Tehran are planning to put locks on large waste containers in the streets to prevent garbage pickers from accessing waste. END_OF_DOCUMENT_TOKEN_TO_BE_REPLACED

The Biden Administration has confirmed to the US Congress that sanction imposed by its predecessor on Iran have drastically reduced Iran's trade with the world. END_OF_DOCUMENT_TOKEN_TO_BE_REPLACED

The UK government said on Sept 20 that Britain would "not rest" until all its dual nationals being held in Iran were returned home. END_OF_DOCUMENT_TOKEN_TO_BE_REPLACED