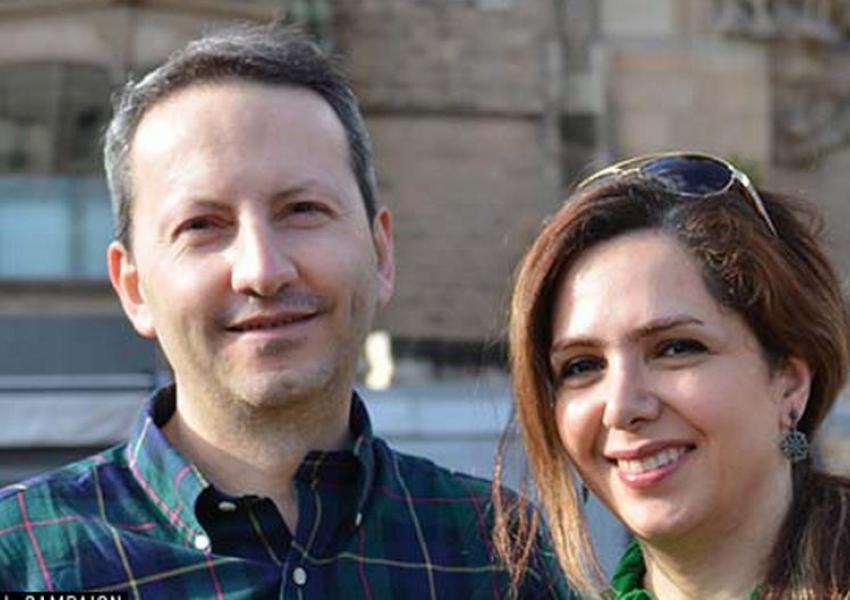 The wife of an Iranian-Swedish dual citizen facing imminent execution has told Iran International TV that her husband, Ahmad-Reza Djalali (Jalili), a 49-year-old doctor and academic, is a victim of Iran’s relations with Europe.

“I’m not asking [just] for the cancellation of the death sentence, I want him to be freed,” Vida Mihranian told Iran International TV on Wednesday. “Sadly, he has become a victim of Iran's relations with Europe.” While Iranian leaders have recently expressed cautious optimism over returning to Iran’s 2015 nuclear deal with world powers, Iran and the ‘E3’ of Germany, the United Kingdom and France have also exchanged barbed remarks over Iran’s atomic and missile programs.

Mihranian said Djalali had called her on Tuesday to say he was heading for a few days into solitary confinement in Even Prison, Tehran, and would then be moved to Rajai-Shahr Prison, Karaj, for execution. “Please do whatever you can for me,” he told his wife.

Djalali, a world-renowned emergency-medicine and disaster specialist, and lecturer at Karolinska University in Sweden, was arrested while visiting Iran in 2016 on the invitation of the University of Tehran and Shiraz University. The father of two young children was charged with “espionage and selling information to Israel” and sentenced to death on October 21, 2017.  The Iranian state-TV (IRIB) aired a video of Djalali confessing, but Djalali subsequently released an audio message from prison alleging he had been coerced.

In a statement released on November 24, Diana Eltahawy, Amnesty International’s Deputy Director for the Middle East and North Africa, said she was “horrified” by news that Djalali would be executed and called on “members of the international community to immediately intervene, including through their embassies in Tehran, to save Ahmadreza [sic] Djalali’s life before it is too late.”

On Wednesday [November 25] United Nations rapporteurs issued a statement pleading for a stay of execution. “We are horrified by the reports that Mr. Djalali is soon to be executed by the Islamic Republic of Iran,” it read. “His torture, arbitrary detention, death sentence and now reported imminent execution are unconscionable acts that should be condemned by the international community in the strongest terms.” The statement was signed by Javaid Rehman, Special Rapporteur on human rights in Iran, and Agnes Callamard, Special Rapporteur on extrajudicial, summary or arbitrary executions

According to the UN statement, Djalali’s lawyer had been presented with the order to implement the death sentence at the prosecutor’s office in Even Prison. “No effort has been made previously by the authorities to inform his lawyer or family of the order,” the UN rapporteurs said.

In a statement released on Tuesday evening, the Iranian Foreign Ministry spokesman Saeed Khatibzadeh said Djalali had been convicted of “security-related crimes” and that Mohammad Javad Zarif, Iran’s foreign minister, had explained to Ann Linde, Sweden’s foreign minister, in a phone call on Tuesday that “any interference in the issuing or enforcement of judicial verdicts” was “rejected and unacceptable.”

After speaking to Zarif, Linde tweeted: “Sweden condemns the death penalty and works to ensure that the verdict against Djalali is not enforced.”

City officials in Iran's capital Tehran are planning to put locks on large waste containers in the streets to prevent garbage pickers from accessing waste. END_OF_DOCUMENT_TOKEN_TO_BE_REPLACED

The Biden Administration has confirmed to the US Congress that sanction imposed by its predecessor on Iran have drastically reduced Iran's trade with the world. END_OF_DOCUMENT_TOKEN_TO_BE_REPLACED

The UK government said on Sept 20 that Britain would "not rest" until all its dual nationals being held in Iran were returned home. END_OF_DOCUMENT_TOKEN_TO_BE_REPLACED