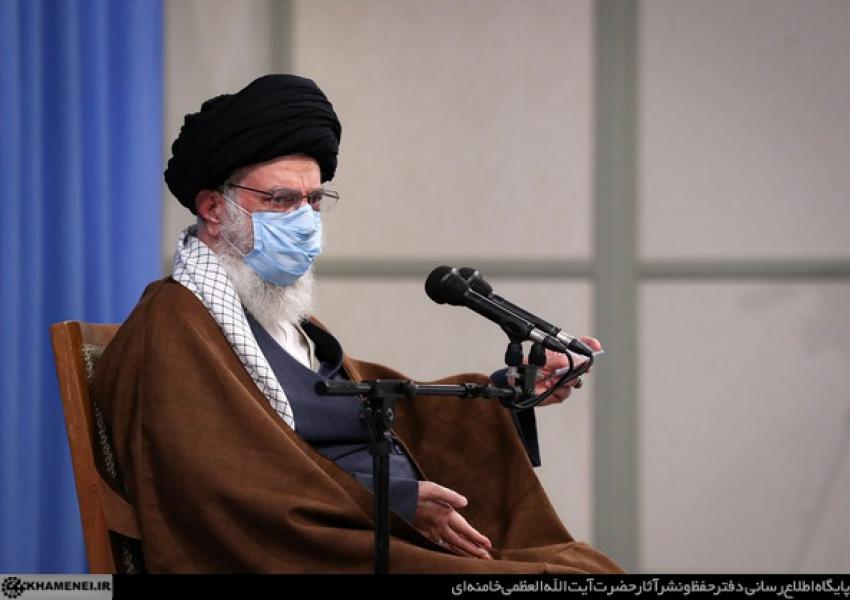 Mehdi Mahdavi Azad, an Iranian political analyst in Bonn, Germany, said in an interview with the Iran International TV that Khamenei’s first remarks on the idea of talks with a Joe Biden administration were broadly positive.

“He could have spoken about [Qasem] Soleimani [the Iranian general killed by the US in January] or forbid talks with the US but he did not do that,” said Azad. “Instead, he chose to analyze the unclear situation in America…It was a positive signal to allow [Mohammad Javad] Zarif [Iran’s foreign minister] and [President Hassan] Rouhani to start negotiations…an implicit approval of talks between Rouhani and Biden’s teams.”

But Khamenei was also harsh with those in the West who question Iran's missile program and its aggressive role in the region. He summarily said, "This is not your business".

According to Khamenei’s website, the aim of the meeting was “to offer practical solutions for Iran’s economic problems, solutions that will give quick outcomes with tangible results in people’s livelihoods.” The stress on the economy reflects Khamenei’s acknowledgement of Iran’s most pressing problems.

Accounts of what Khamenei said at the meeting have been given by state media drawn from the website. In discussing a possible international breakthrough, and consequently the easing of draconian US sanctions introduced since 2018, the Leader stressed the importance of not relying on world powers, especially given the US had not honored the 2015 nuclear deal and now faces internal “instability”.

“There are people who have pinned their hopes on those [Americans] who treat us in a hostile way. Furthermore, the domestic political situation in America is unclear. It is not possible for [the newly elected US administration] to take a stance on international issues. So, we cannot count on them, or plan based on their views.”

Khamenei said there were two ways to tackle US sanctions, firstly by “lifting” them, through agreement, and secondly by “nullifying and overcoming” them: “We tried the first option for a few years, that is lifting the sanctions by negotiating, but it did not work. The second option may have difficulties in the beginning but will have a favorable end.”

Khamenei stressed in either case the importance of “diligence, courage, serious effort, and follow-up by the heads of the three branches of the government.” He prioritized reducing the budget deficit, increasing public investment, boosting production, and protecting the underprivileged.

Khamenei expressed wariness of Europe – a day after Britain, France and Germany (the ‘E3’) met to co-ordinate their positions over Iran. While continuing to support the 2015 nuclear deal after the US withdrew in 2018, the E3 has failed to offer practical assistance to Tehran in the face of US sanctions. The E3 has also criticized Tehran’s expansion of its nuclear activities, its missile program and its relationships with regional allies.

“America’s situation is unclear and the Europeans continue taking positions against Iran,” Khamenei said. “They have intervened in the region’s affairs more than any other country and still, they tell us not to intervene in the region. The UK and France possess destructive nuclear missiles and Germany is trying to have them. Yet they tell us that we should not have missiles…This is none of your business…We cannot trust foreigners and pin our hopes on a breakthrough they might broker.”

iran
Khamenei
Talks with the West

City officials in Iran's capital Tehran are planning to put locks on large waste containers in the streets to prevent garbage pickers from accessing waste. END_OF_DOCUMENT_TOKEN_TO_BE_REPLACED

The Biden Administration has confirmed to the US Congress that sanction imposed by its predecessor on Iran have drastically reduced Iran's trade with the world. END_OF_DOCUMENT_TOKEN_TO_BE_REPLACED

The UK government said on Sept 20 that Britain would "not rest" until all its dual nationals being held in Iran were returned home. END_OF_DOCUMENT_TOKEN_TO_BE_REPLACED