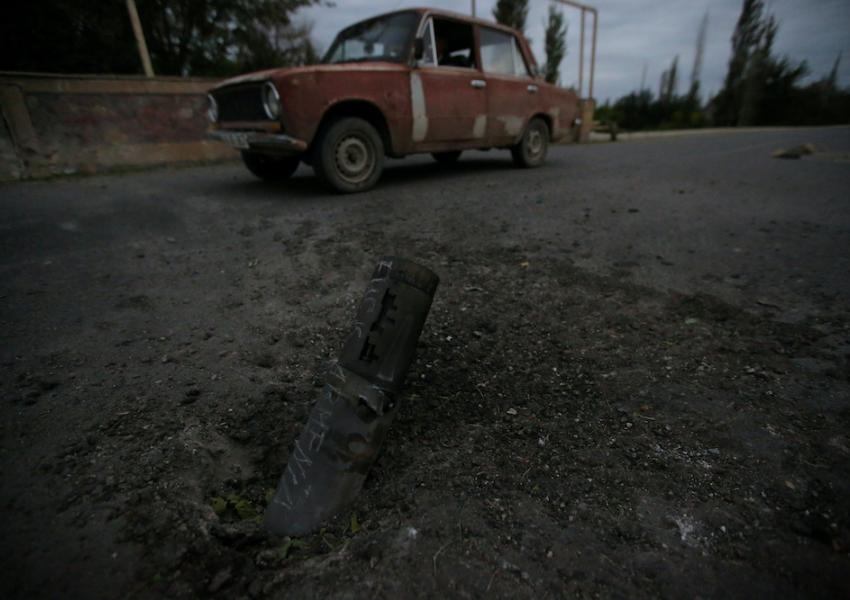 With fighting raging since Sunday morning between Armenian and Azerbaijani forces over the disputed area of Nagorno-Karabakh, Iran’s Foreign Ministry Spokesman on Tuesday denied allegations that Iran has facilitated Russian military supplies to Armenia.

“The transit of trucks and non-military commodities between Iran and its neighboring countries has always been going on, and the trucks that have been mentioned are operating solely within this framework,” Saeed Khatibzadeh said. “The Islamic Republic of Iran closely monitors and controls the transit of commodities to other countries and will never allow the Iranian territory to be used for the transit of arms and ammunition.”

The Security Deputy of the Governor of Iran’s East Azerbaijan province, Aliyar Rastgou, on Tuesday also denied the passage of arms, but confirmed that Russian-made Kamaz trucks were being transited to Armenia. “The images…published in social networks show the trucks that Armenia has purchased from Russia, which are transited through Iran, but I insist that they do not contain any military equipment,” Aliyar was quoted by ISNA as saying. Aliyar also claimed the trucks had been held at Iran’s Nourdouz border point, 190 km to the north of Tabriz, for necessary investigations.

The Iranian Embassy in Baku on Monday also dismissed allegations of arms supplies, alleging that “hostile forces” aimed to sabotage the “developing cooperation and friendship” between Iran and Azerbaijan.

Iran, which is said to generally supports Armenia, called on Monday for an immediate cease-fire and negotiations between the two sides. Tehran is sensitive to Armenian-Azerbaijan tension because of the large presence within Iran of ethnic Turks, or Azeris, who make up around a quarter of the 84 million population, living mainly in the northwest of the country but with a substantial presence in the capital Tehran.

Araz News, website of the Azerbaijan National Resistance Organization (ANRO), an exiled separatist group of Iranian Azeri, on Monday published videos and photos of trucks allegedly carrying arms and equipment to Armenia. Formed in 2006, ANRO advocates an ‘Azerbaijani Homeland’ for Iranian Turks while projecting a pan-Turkist vision in which it calls Iran’s East and West Azarbaijan provinces, as well as neighboring Ardabil province, ‘South Azerbaijan’ while dubbing the Republic of Azerbaijan ‘North Azerbaijan.’

“The Turkic nation of South Azerbaijan are angry about the Iranian regime’s cooperation with Armenia against their brothers and sisters in North Azerbaijan,” Araz News said.

The news website of Gunaz TV, a Chicago-based TV broadcasting in Azerbaijani Turkish and advocating pan-Turkism, on Monday also posted a video purportedly showing Russian-made Kamaz trucks on the way to Armenia via Iran’s Jolfa border crossing. The website also alleged that brigade 25 of the Iranian Army and Revolutionary Guards (IRGC) were deploying to the border area “to support Armenian occupiers.”

The videos have widely been circulated on social media. Iran International cannot verify their authenticity.

Nagorno-Karabakh is a disputed territory, internationally recognized as part of Azerbaijan but with a majority Armenian population. It is governed by the Armenian-backed de facto Republic of Artsakh. Tension between the two former Soviet republics of Armenia and Azerbaijan has been endemic since the Soviet Union’s collapse in 1990-91 and a bitter war in the early 1990s, partly over Nagorno-Karabakh, in which 25,000 died.

City officials in Iran's capital Tehran are planning to put locks on large waste containers in the streets to prevent garbage pickers from accessing waste. END_OF_DOCUMENT_TOKEN_TO_BE_REPLACED

The Biden Administration has confirmed to the US Congress that sanction imposed by its predecessor on Iran have drastically reduced Iran's trade with the world. END_OF_DOCUMENT_TOKEN_TO_BE_REPLACED

The UK government said on Sept 20 that Britain would "not rest" until all its dual nationals being held in Iran were returned home. END_OF_DOCUMENT_TOKEN_TO_BE_REPLACED