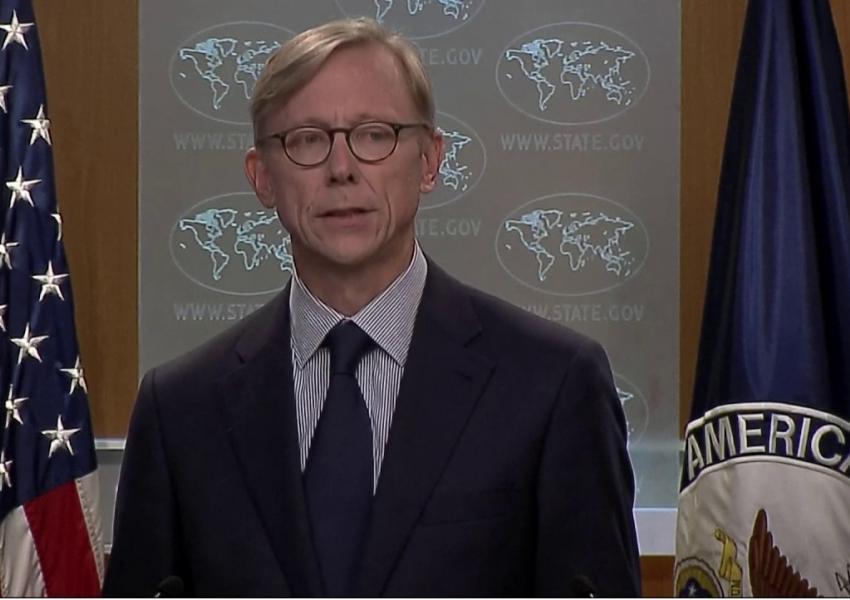 Hook: Iran spent $16 billion on its militias in Syria and Iraq

Brian Hook, the US special representative on Iran in the State Department says the Islamic Republic of Iran has spent $16 billion on its proxy militia groups in Syria and Iraq.

In his interview with Al-Arabiya TV, Hook said Iran’s goal in Syria is to protect Bashar Assad’s regime.

Regarding Iran’s influence in Iraq, Hook said Washington is waiting for Iraq’s measures for economic independence from Iran.

The leader of the Islamic Republic yesterday claimed that the protests in Iraq and Syria are caused by Western intelligence services and called on protesters to express their demands within the legal structures.

Hook Also said that Iran is trying to shape the Houthis of Yemen into a group that can threaten Saudi Arabia.

He mentioned the recent attacks against Saudi Arabian oil facilities and added that Iran is attacking Saudi Arabia from the north and Houthis of Yemen attack it from the south.

Brian Hook once again emphasized that “the US sanctions on Iran are due to Tehran’s destabilizing behavior in the region” and that Iran has one of the biggest missile programs in the middle east and the US has targeted its development.

He added that in the past year, sanctions have lowered Iran’s oil exports from 2.5 million barrels a day to 120000 barrels a day.

Hook also announced that the United States will create a new financial mechanism with Swiss banks that will facilitate the export of humanitarian and medical goods to Iran.

City officials in Iran's capital Tehran are planning to put locks on large waste containers in the streets to prevent garbage pickers from accessing waste. END_OF_DOCUMENT_TOKEN_TO_BE_REPLACED

The Biden Administration has confirmed to the US Congress that sanction imposed by its predecessor on Iran have drastically reduced Iran's trade with the world. END_OF_DOCUMENT_TOKEN_TO_BE_REPLACED

The UK government said on Sept 20 that Britain would "not rest" until all its dual nationals being held in Iran were returned home. END_OF_DOCUMENT_TOKEN_TO_BE_REPLACED