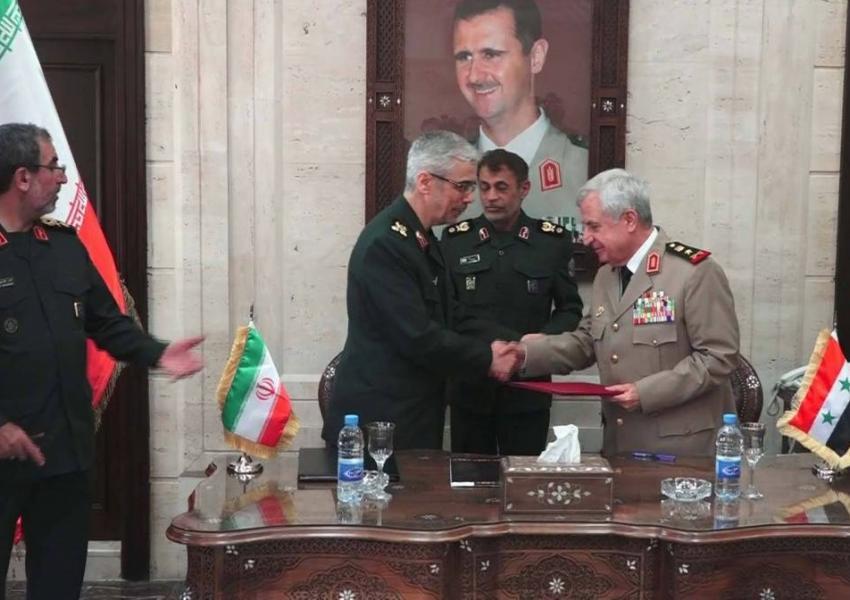 Iran and Syria sign a security and military defense pact

One day after Bashar Assad’s government and allies were accused of war crimes by the United Nations, Iran and Syria signed an all-encompassing military, defense, and security pact while Iran’s Chief of Staff of the Armed Forces, Mohammad Bagheri is visiting Syria.

The agreement was signed on Wednesday by Bagheri and Ali Abdullah Ayyub, the Deputy Commander of Syrian armed forces.

Bagheri traveled to Syria on Tuesday in order to sign the pact, which is said to increase cooperation on security issues and to develop a robust air defense system for the Assad regime.

Bagheri stated: “From now on Iran will strengthen its ties with Syria even more, on all levels.”

Israel has conducted air raids throughout Syria over the past few years with almost all of them being directed at Iranian military targets including convoys and warehouses, military bases, weapons development sites, militia bases, and top army commanders. Two weeks ago, it was reported that seven terrorists from a pro-Iranian proxy group were killed in a strike attributed to Israeli fighter jets. On Wednesday, Bagheri said Damascus had “retaliated with force” to those events, explaining that Iran’s presence in the region is due to Syria’s request “to protect its sovereignty.”

Bashar Assad’s regime has been accused of massacre of thousands of Syrian citizens.

City officials in Iran's capital Tehran are planning to put locks on large waste containers in the streets to prevent garbage pickers from accessing waste. END_OF_DOCUMENT_TOKEN_TO_BE_REPLACED

The Biden Administration has confirmed to the US Congress that sanction imposed by its predecessor on Iran have drastically reduced Iran's trade with the world. END_OF_DOCUMENT_TOKEN_TO_BE_REPLACED

The UK government said on Sept 20 that Britain would "not rest" until all its dual nationals being held in Iran were returned home. END_OF_DOCUMENT_TOKEN_TO_BE_REPLACED